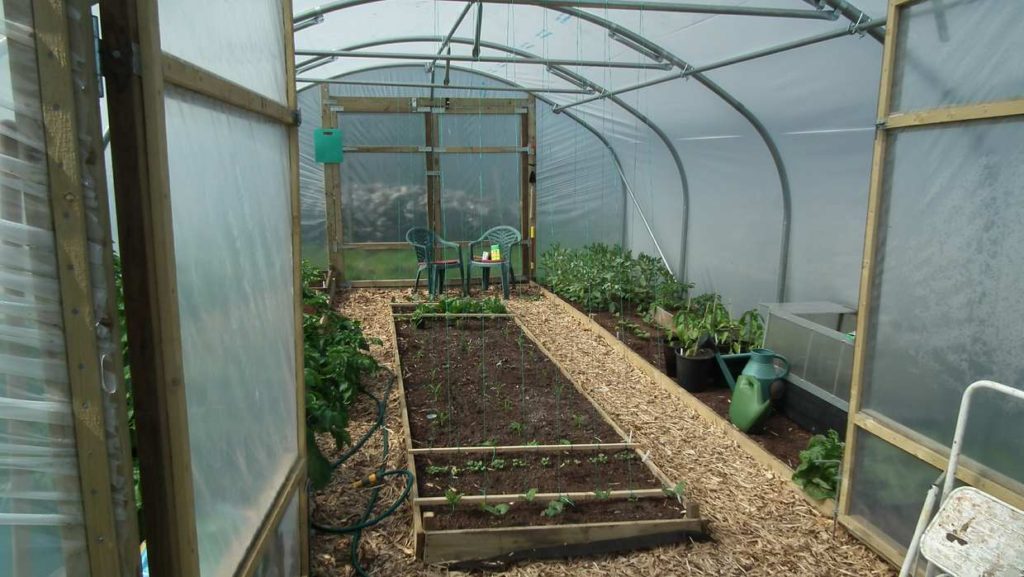 I’ve been enjoying the terrific weather this week, it’s been better than summer! OK, not quite as warm as summer but bright warm sunshine and blue skies beat the monsoon season we often get.

One sunny morning I went up to the polytunnel at 10am and it was like walking into a sauna – 37 degrees! It had only been in direct sun for an hour and the night temperature had fallen to just 3 degrees. The next morning I had the doors open at 8am ready for the direct sunshine to appear over the hill and hit the tunnel.

Come the summer, assuming we have one, I can see I’ll have to have the doors open at night but at the moment the night time temperatures have been very low and I’m closing up around 7pm when things start to cool down.

I’ve been keeping an eye on the temperatures in the greenhouse and polytunnel with maximum / minimum thermometers. My feeling was that the larger volume of the tunnel would give more stable temperatures at night but it seems that the tunnel drops lower at night. Having said that, I still need to check the thermometers are reading the same. They weren’t the cheapest but price isn’t always a good guide. If one is reading lower than the other at the same temperature then it would explain why it isn’t performing as I expected.

The soil temperature in the tunnel seems very stable, just under 15 degrees. This is around 5 degrees more than soil outside. This is ideal for the tender plants like sweetcorn and tomatoes as it will warm the air at low level even when it’s cold higher up.

Up in the tunnel most things are doing well except for very poor germination of the carrots and the potatoes that have a large amount of top have no real tubers yet. I spoke with Dr David Shaw from the Savari trust as he’s an expert on potatoes who reckoned it could be light levels slowing down the tuber production.

I gave the tomatoes, peppers and sweetcorn a high-nitrogen liquid feed (Miracle Gro) to get them away. Thing is with a liquid feed is that it goes in quickly and acts fast. The tomatoes and peppers will go onto a liquid tomato feed when the fruit starts to form but the sweetcorn will be getting pelleted chicken manure and weekly Miracle Gro.

The soil in the polytunnel is thin, poor pasture that was turned over and then covered with about 10cm of a mixture of spent and new commercial multi-purpose compost. It’s going to take a few years before the organic matter and fertility in there is up to much.

I’ll be adding compost and forking to open up the soil below as I go. Hopefully it will start to build up a worm population – there are very few worms in the soil here – and once they arrive we should see the underlying quality improve dramatically.