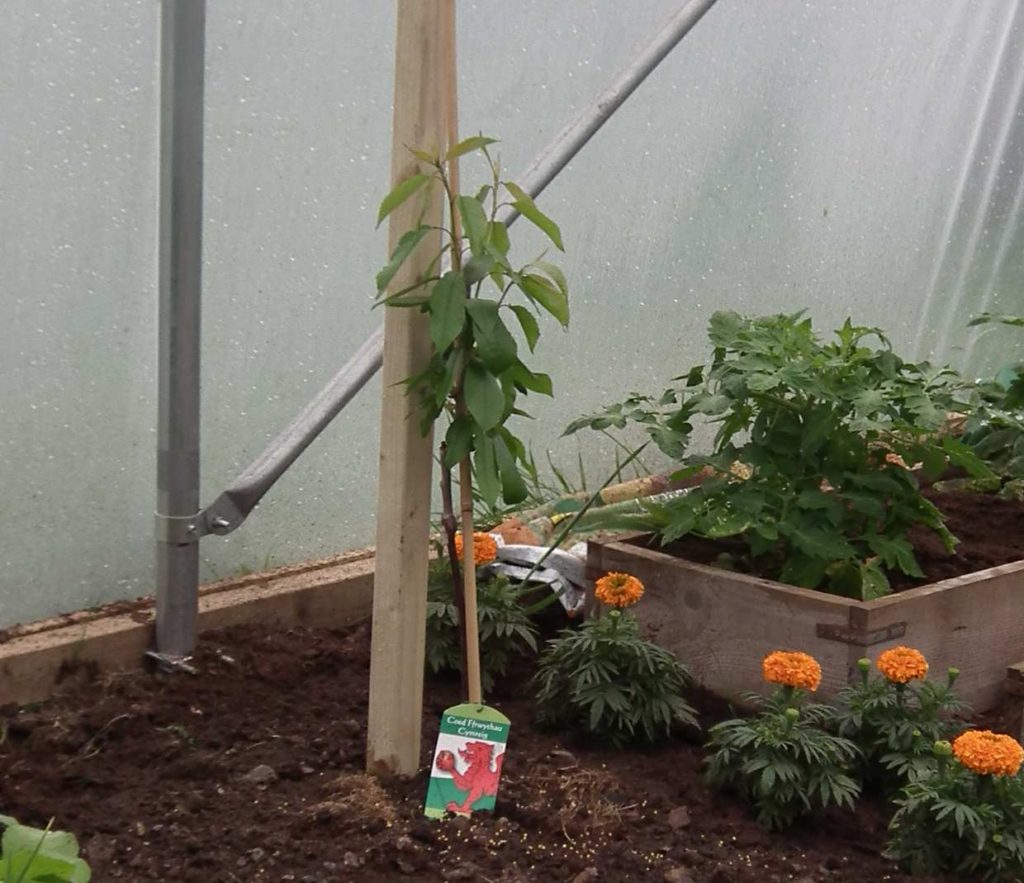 A bit amazing for Wales, at least this part of Wales, it’s been too dry. Usually the weather forecast promises sun and then changes to rain but the last weeks it’s been the opposite.

I had to water the raised beds which took a while. What a boring job! Standing there holding a hosepipe and spraying bed after bed. It can do more harm than good to just lightly spray the surface, so I make sure each one is thoroughly soaked.

Now it’s pretty rare here that I need to water, Snowdonia being one of the wettest places in the UK, so the sprinklers rarely see the light of day. The best one, an adjustable impulse sprinkler on a tripod turns out to broken. One of the control clips has come off and it now only goes 360 degrees rather than a half circle or whatever.

Eventually I turn up a very old plastic impulse sprinkler but the O ring has gone. It takes nearly an hour to find where I had safely put the bag of spare O rings and fix it. I’d ordered a new tripod sprinkler from Ebay which was supposed to be delivered on Thursday. Needless to say, no sign of it.

I also ordered a cheap impulse sprinkler on a spike thinking I may be able to use the head to fix up the broken tripod sprinkler but after pressing the go button I realised it’s coming in a month or so all the way from China! Note: always check the delivery prediction when buying off Ebay.

A lazy start to Saturday for me and the sun but the polytunnel was already at 30 degrees when I opened it up. I started by transplanting some of the ‘spare’ climbing beans to fill in the gaps and a bit of weeding. The sharp hand hoe (Nejiri-Gama) I bought from Japan is really efficient and makes short work of weeding.

My neighbour turned up so we settled down on the chairs for a good chinwag in the warmth of the tunnel for a bit before I watered which is taking a bit longer than I’d like. So I’ve ordered a sprinkler hose to lay in the centre bed. Once the sweetcorn in that bed has grown a bit, it will be pretty demanding for water. A sprinkler hose should save my time and deliver the water efficiently.

I finally got my Welsh Cariad cherry tree planted in the polytunnel. Ian Sturrock developed the variety for the cool and wet Welsh climate by crossing Stella with Napoleon Bigarreau and crossing the result with Devon Mazzard. He reckoned we had little hope of cropping it outdoors here at 200 metres high but a good chance in a polytunnel. It’s on the latest dwarfing rootstock, Gisella, so it won’t overgrow for the tunnel.

I’m fan training it so behind I’ve put a post in. Once it has started growing, I’ll put posts to either side at roughly 1.5M spacing and run wires across to tie the branches to. The post is just treated 2×2 with 20cm lengths of 2×1 screwed near the base, under the soil to form a cross which will keep it stable.

I dug out the planting hole larger and deeper than the pot, forking the soil at the base and adding a kilo of chicken oyster grit to supply the cherry stones and 500 grams of hoof & horn fertiliser. This should release slowly to feed the tree as it grows on. 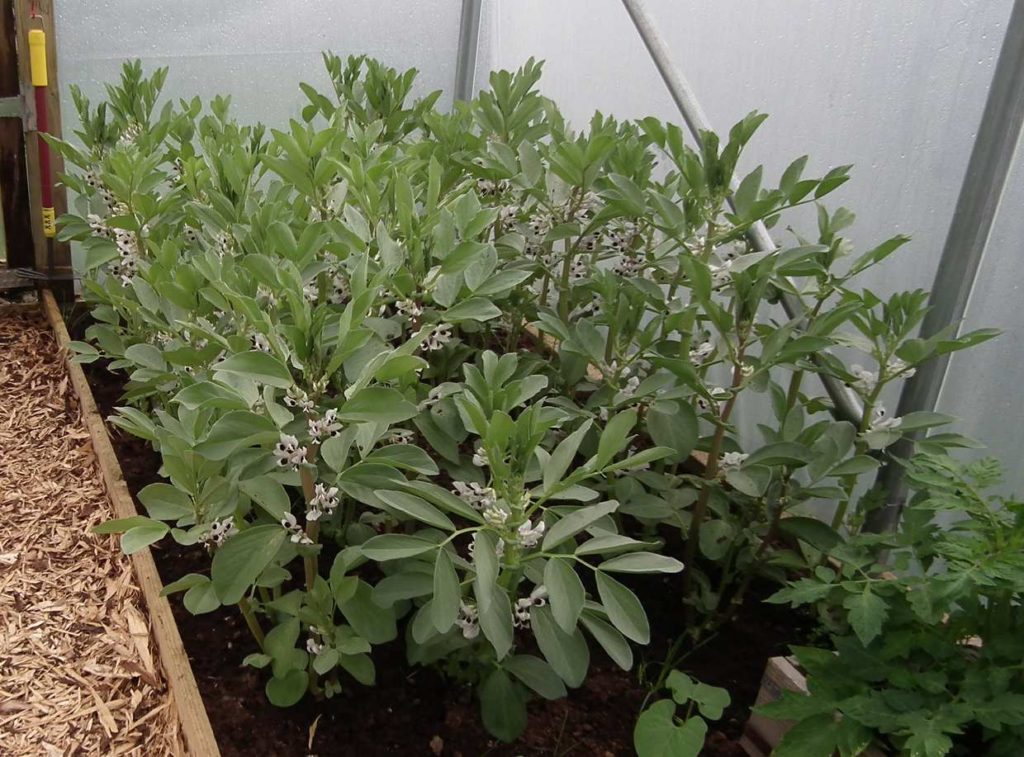 Broad Beans in the Polytunnel

Moving on the Leeks

I’d started some leeks in modules which I moved into a deep trough to grow on until they’re ready to plant out. I had also sowed some in a small trough and the germination rate was excellent so they were really overcrowded. Filled 3 large troughs with compost and transplanted those seedlings into them.

I watered part of the potato patch with the sprinkler but didn’t bother moving it on as the weather forecast was for heavy rain from 8pm to 4am Sunday. The reality was light rain which petered out by midnight! Never thought I’d find myself wishing for a downpour here! 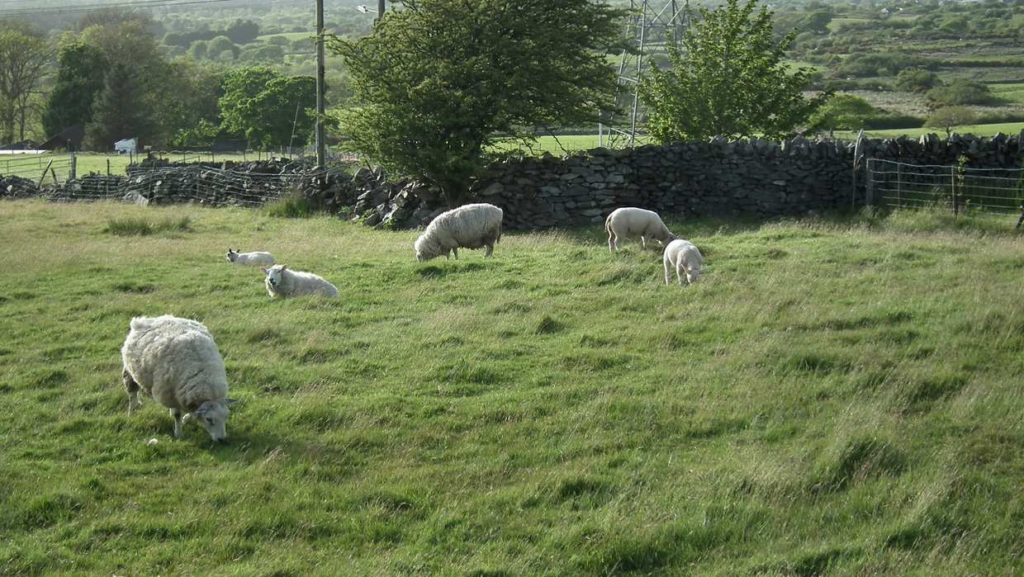 The sheep that were in the back fields have been moved to the large front field. Looking at an old map, that used to be 3 small fields but now it’s just one. They’ve eaten down the back fields so giving the grass a rest to re-grow is a good idea but it’s in check due to the dry weather at the moment. Once we get some decent rain it should quickly regrow.

Even these Texels which are far more laid back than Welsh mountain sheep can be a pain. We ran a fence a metre from the wall at the bottom of the field and planted rowans. In five years they should make a decorative wind break. One of the lambs found a way in between the end of the fence and the wall so some emergency fencing went in to close the gap.

Between the field and the track up to the house we’d planted another dozen rowans. The lambs discovered they could reach the trees by sticking their heads through the wire. Result – a row of leafless rowan saplings.