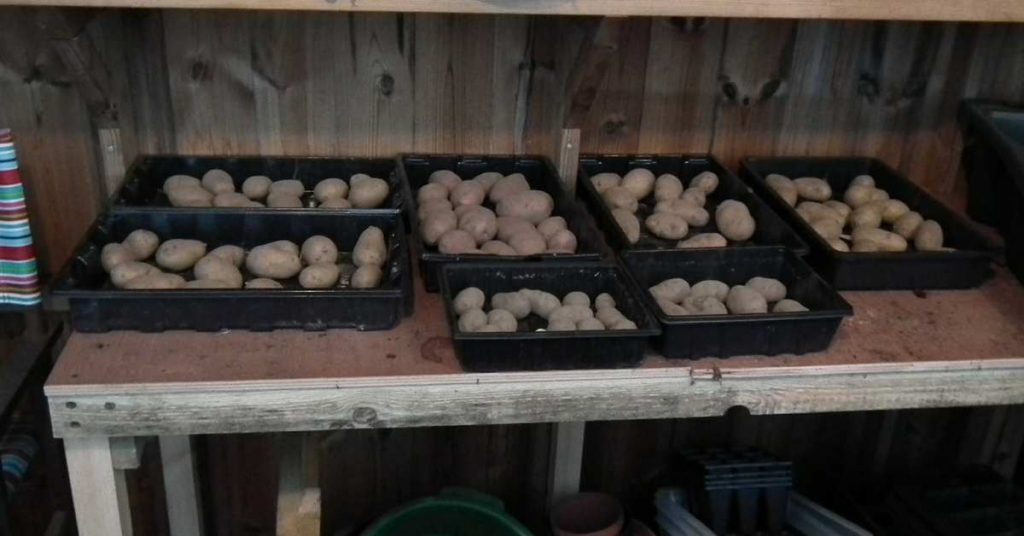 I know some of the fashionable gardeners question the value of chitting potatoes. My feeling is that it certainly gets the early potatoes off to a flying start. With the main crops it probably makes little difference but if you don’t get your order in early there’s a fair chance the variety you want will be out of stock or you’ll get the tubers others don’t want.

So what are you going to do with your seed potatoes whilst you’re waiting for planting time? You may as well chit them anyway.

Last year I grew some potatoes in bags and sacks following the show growing method detailed here: Growing potatoes for show. It’s not as easy as it might seem. You have to be very diligent with watering – even when it’s raining. If not, yields are low. Remember potatoes are mainly water.

This year I’ll be taking advantage of the polytunnel to get some very early potatoes. They can go in the border at close spacing so I can treat them as I would the later planted outdoor crops.

This year I’ll be growing:

My favourite first early going back to 1930. Arran Pilot has always performed well for me, good as a small new potato but grows quite large if left. Keeps quite well. A good all-rounder but best boiled.

I’ve not grown this before, so I’m looking forward to seeing how it does for me here. It’s been around since 1901 and it’s still easily available, which says a lot. It’s said to be poor yielding and susceptible to disease, so a challenge. Apparently makes good chips.

I’ve not grown this second early before, either but we’ve had some from the shop and they make excellent baking and chipping potatoes. Good yield and size, especially if left to grow on. Fair disease resistance too.

I think it’s hard to beat second early Charlotte as a salad potato with a firm waxy flesh although Linzer Delicatesse which I grew in 2010 did just pip it for flavour. Charlotte grows quite large if left and seems to have good disease resistance.

The first of the Sarpo varieties to become available in the UK, this late maincrop is a firm favourite with us. I know others say different, but trust me – it doesn’t roast or chip well. It’s very firm texture doesn’t suit everyone but we love it as a baked potato or sliced in duchess potatoes. Mixed with a lot of butter and cream or milk Sarpo Mira makes a fabulous mashed potato. Firm when mashed it’s great for croquettes as well.

Yield is huge, the individual potatoes can grow very large as well. Disease, blight and slug / worm resistance is legendary although some recent blight strains can knock it back. Never failed me though.

Another potato from the Sarpo breeders, this early maincrop has an almost blue skin. It’s great roasted or chipped. It’s not as blight resistant as Mira but still pretty disease resistant and yields well.