New path through the vegetable garden 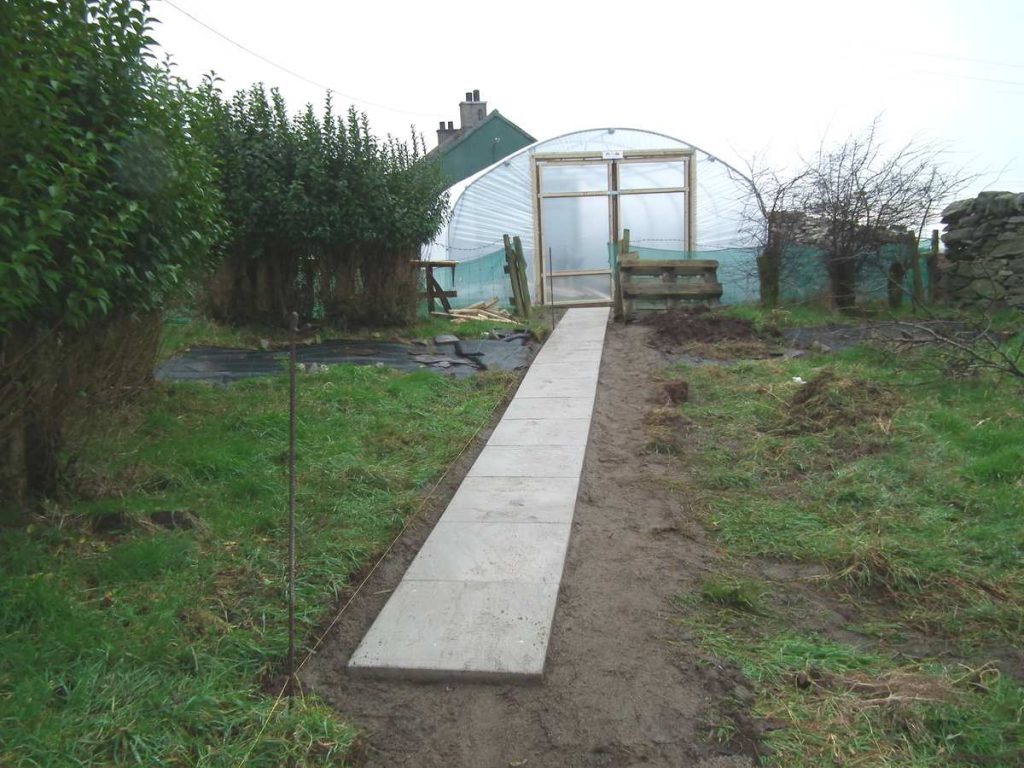 To get to the polytunnel we have to go up into the vegetable garden and along the old path. This is made of slate sheets laid on the soil but some slates are missing or broken and those that are left are really slippery when wet. In fact, if it’s raining or icy it’s a real death trap to get through.

Now I’ve been planning on putting a new path in for a couple of years but it’s a tough task and keeps getting put off. So I had a word with my pal Bryan the Builder from Gwynedd Restoration and he’s laying it for me when he’s got spare days.

I’d have just laid the slabs on the ground but not Bryan, he does jobs properly or not at all. A pallet of slabs and a builder bag of concrete sand was delivered before he and his son arrived with his cement mixer and tools.

To say it was a cold day hardly does it justice. The thermometer might have said 3 degrees but the wind chill was cutting that down to minus 15 or worse. My job was to venture out to the workers with cups of tea.

Despite long johns under trousers, short sleeved and long sleeved thermal vests, shirt, jumper, fleece-lined waterproof jacket and imitation furry hat with ear flaps topping off the fashionable ensemble, I was shivering! We took refuge in the polytunnel to drink the tea.

One day later and we’ve half the path done, slabs properly bedded down and level. I’m pretty sure it will outlast me. The reason for a slabbed path is that it is quicker to lay and basically on the level. If it was on a slope I’d have gone for a concrete path, ridged to be better underfoot in icy weather. It does look a little raw now but given 6 months it will weather in and look less alien.

On an allotment which will have a new tenant at some point, I’d have just laid the slabs on the ground rather than bed them in a concrete mix. That way they could be taken up again to suit a new tenant’s design.

Before laying a permanent path – always be absolutely sure it’s going in the right place. As a rule of thumb, look at the way you actually walk from A to B. That’s usually the right place to lay the path.

You may find these articles interesting. 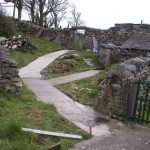 How to Build a Concrete Garden Path

This concrete path is not the most attractive, but it is relatively cheap, long lasting and the surface is not slippery which is a boon in wet or icy weather.

Start by planning exactly where the path is to go. I’d suggest seeing how you walk… 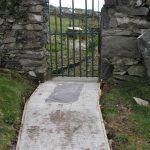 This guide is designed to be read in conjunction with the article How to Build a Concrete Path that covers the details. This photo guide should give you a quick over view of the process.
Step by Step Guide To Building Concrete Path
Preparation – Marking…
Posted in Allotment Garden Diary