Bulk Buying Compost and Rain on the Plot

A Day on the Allotment

It was raining quite heavily this morning and after yesterday on the plot I wasn’t exactly functioning on all cylinders. Well the doorbell rang and it was Larry at the door with the glad tidings the compost man was delivering but Larry was going off to see his daughter in far off Leeds.

So a quick late breakfast and I headed down to site. To be honest, I’d have rather headed back to bed, but there you go.

Most of the time was spent between deliveries waiting for him to return with the next load so I looked around for something to do apart from watch the rain hitting the greenhouse.

When there was a short break in the rain I thought about continuing the digging. What a daft idea that was. The water was lying in the trench and just looking at the paths should have told me that digging was out of the question.

I tidied up the small greenhouse, fixed the plank that forms the bed side and roughly levelled the base ready to lay slabs. Although I don’t feel I actually did too much, getting soaked and the bit of humping I did do was enough to make me very glad to get home.

One more load arriving tomorrow and we’re done. My load was the last of the day and I must admit to a sinking feeling of ‘how am I going to move that lot?’ as I looked at it. 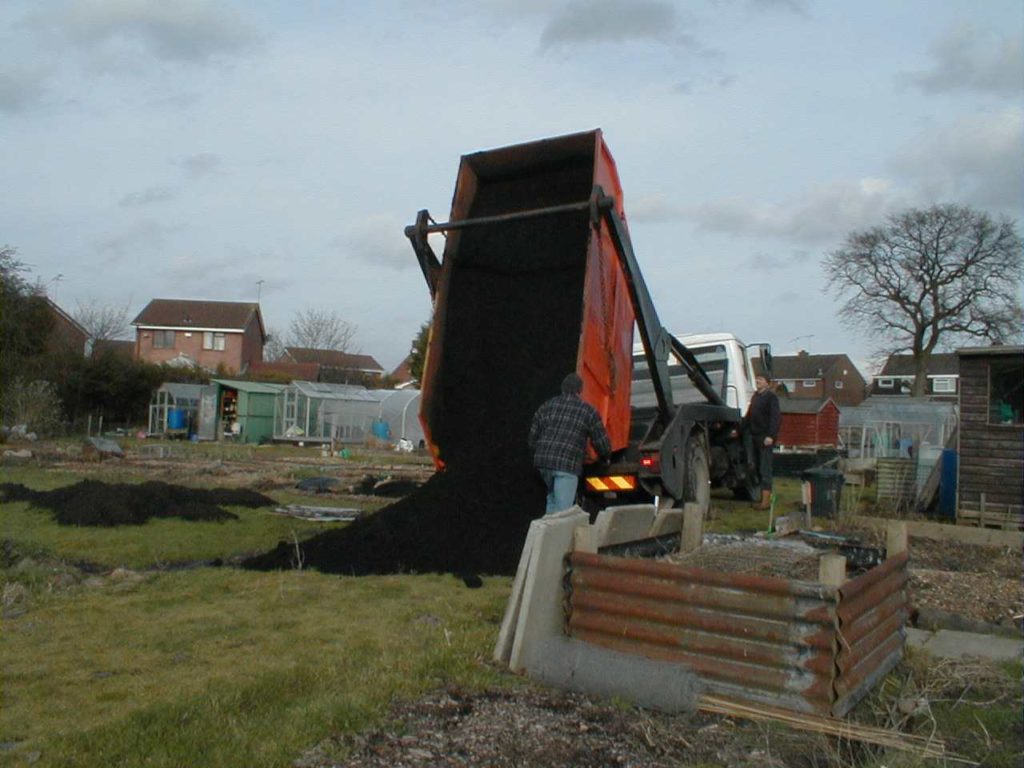 Get Your Compost Here!

I had a chat with Steve Bloor who is that chap who makes and delivers the compost, which was really interesting.

I think I’ve got this right, but any errors are mine!

Local councils deliver the contents of the green waste bins to his farm, up to 160 tonnes a day! They shred this waste and stack it in long triangular rows. Imagine a long old fashioned style of tent. Natural bacteriological action causes the heap to heat up and they then turn it, mixing the contents. Repeat eight times and you have something resembling the content of a growbag or a commercial potting compost except that it contains lots of twigs and bits of wood.

The next stage of the operation is to sieve the compost through a 20mm mesh twice to remove these bits and what you are left with is very similar but a little coarser than bagged compost you might buy from the garden centre. Incidentally, it’s about a tenth of the price of buying bags of compost buying in this bulk.

The twigs etc removed by the sieving process are shredded again and he mixes them with straw for bedding cattle. I really liked the integration of this. A really green business.

I asked him if they had analysed the compost and he said they had. Basically the NPK value is about 80% of that of rotted farmyard manure but the nitrogen wasn’t readily available. Still, even as just a soil conditioner it is fantastic stuff.

The bulk of the cost is, of course, in the delivery charge, which will vary according to how far you are from Steve’s farm. If you live a reasonable distance from Crewe, Cheshire and are interested in bulk purchasing compost you can contact Steve Bloor on 01270 526210 or mobile 07759 145967 or by email to stevebloor@uwclub.net