I know many of my visitors would quite like to live ‘the good life’ if they only could. The thought of growing your own, living from the land on a few acres is a dream many of us share. 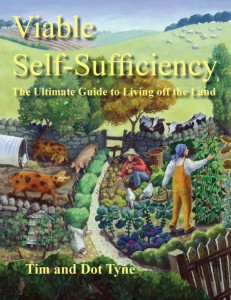 Of course the reality is that most of us never get to do it. For a start, to buy a decent small holding – never mind a small farm – takes a fortune. Most of the smallholdings, especially those with decent land and in the areas of the country with a mild climate have been snapped up.

Those who worked in the city, trousering their mega-bonus or those lucky enough to have bought a house in London before the prices became such that you need to be a Russian oligarch to buy there can sell up and buy a little place in Dorset with a few hundred thousand in the bank as well. Winning the lottery, just a million or so, is another good way to get there.

Then there’s people like me, lucky enough to have finally paid off the mortgage and work from home (or retired) who can get somewhere with some land. Trouble is, by the time we got there our get-up-and-go was going. It’s hard work at 30 but a lot harder at 60!

We were inspired by John Seymour, his famous work -The Complete Book of Self-Sufficiency – was published in 1976. I think it’s hard for those who weren’t there at the time to understand the impact it had. Anyone who read it then came away with the feeling that they could escape the system and live off the land. Not just could but should, it was that inspirational.

Since then we’ve seen a lot of other books published on smallholding, self-sufficiency and small scale farming. Sadly many of them are dross, re-hashing what’s gone before and cashing in with a good title for a quick buck. There are some decent ‘how to’ books out there but less than you might think and many of them are getting very dated now.

What we Really Need

What we could have really done with back in 1976 wasn’t just an inspirational book on how to live the good life but a manual that would guide us on how to get there and how to make it viable rather than a dream. Something that offered a choice other than, first make your fortune.

Well my friends over at Home Farmer magazine, who I write a little monthly column for, contacted me about a book they want to publish that does just that, Viable Self-Sufficiency.

It’s written by Tim & Dot Tyne who live on a smallholding near us in North Wales and are both respected writers. They have the in-depth knowledge, extensive experience and the ability to explain clearly that’s required for a book like this.

Tim and Dot firmly believe that smallholding should be regarded as a genuine career option, and one to be entered into at any age, not just as an option for downsizing in later life. Having done this themselves, straight after leaving university, they know full well that it is achievable, and how to succeed. Throughout the book they keep it real, walking a fine tightrope between the realistic and the inspirational.

This is the book that tells how it really is and how to do it. Inspirational, yes but also a real reference work.

The problem is that book publishing is both an expensive and a risky business, dominated now by multi-national corporations with deep pockets and the ability to buy a TV celebrity to stick on the cover. For a small operation like Home Farmer it’s too big a risk to take without help.

They may not have spare pots of money but they stick to their ethics. For a start, they don’t believe that it fits their ethos to have this book printed in the Far East or China and shipped half way around the world – even if it’s cheaper. So the book is being printed in Scotland by the only printer left in the UK who can handle a 432 page full colour hardback

I think this book is needed and valuable to our knowledge base. As a published author myself, it’s a book I would love to have written if I’d had the knowledge and experience. I’m really looking forward to reading it though.

What they need is your support and I’m asking you to join me in backing this project. They are crowdfunding some of the printing costs via Kickstarter There’s a lot more information here on how you can help make sure this book gets published along with a 24 page extract from the book for you to read

There’s an extract here to tempt you!

Almost without exception, there’s an overriding assumption that anyone getting into smallholding is moving from some other more lucrative lifestyle – it seems to be generally accepted that the newcomer will be someone with capital or property likely to have a reasonable income from either pensions or employment.

This can make rather demoralising reading for younger people with burning ambitions of self-sufficiency: is it really necessary to spend 30 years or more as a slave to industry simply in order to enjoy your declining years in rural splendour? That’s a long time to wait to realise your dreams, and you might not live that long anyway!

And what about ‘downshifters’, that steady trickle of high-salaried, early middle-aged families escaping stressful city lifestyles and opting for a gentler existence? Why go through all that stress in the first place?

Well, it all comes down to money. “Rid yourself of your mortgage,” advised one writer. Great advice for mortgage holders, but, for anyone wishing to start as they mean to go on, the problem is not so much getting rid of the mortgage, but getting the mortgage in the first place.

What bank in its right mind will part with a few hundred thousand pounds on the strength of income predicted from an overgrown veg patch and the sale of eggs from a dozen hens? Affluent downshifters and top-of-the-property-ladder pensioners have effectively pushed smallholding prices way beyond the reach of the first time buyer, forcing the younger generation of dreamers to follow the same stressful route through the city smoke.

So, is there a place out there in the world of self-sufficiency for the ‘career’ smallholder? Well we think there is, but then we would say that – we’ve never done anything else!

Start as you mean to go on

In 1993/94, when Dot and I were in our final year at college (aged 20 and 21 respectively), we abandoned halls of residence in favour of renting a house together, some distance out of town.

For a few quid a week extra we also managed to rent the small field alongside, and some outbuildings. Part of the field we fenced off to form a vegetable garden, and built a small coop for half-a-dozen hens. The remainder of the field held some store lambs used primarily for sheepdog training (a useful sideline) and a colt foal we’d bought to rear and sell on as a riding pony.

The outbuildings were ample for stabling and kennels, and we could easily have added a milking goat and a couple of fattening pigs, had we so wished. We had a hutch full of ferrets and a shotgun apiece, so rabbit, hare, duck, pigeon and pheasant often appeared on our menu (and so too, on one occasion, did an extremely large sea-trout, but perhaps the less said about that the better…).

We brewed our own beer, baked our own bread, and altogether enjoyed ourselves immensely! All of this was viewed with some amusement by our fellow students, but we had the last laugh as we watched our colleagues spiralling hopelessly into debt. The rent (for field and cottage together), if I remember correctly, was £34 per week, which was easily covered by doing lambing work during the Christmas and Easter holidays, and I went shearing at weekends in the summer, with Dot wrapping fleeces. At the end of our college course our student grants remained largely intact, ready to finance our next move.

Now, I’m not for a moment suggesting that you blow your student grant in favour of a self-sufficient lifestyle, but this story does serve to illustrate the fact that it really isn’t difficult to make a start in smallholding; there’s really no mystery about it, and neither need it require vast capital. (A grant cheque does come in handy though…)