Our neighbours are, like us, planting trees. In the past a lot of the countryside here was forested but trees were chopped down for shipbuilding and to clear space for farming. The economics of farming now are such that marginal land like ours is just used for pasturing sheep. 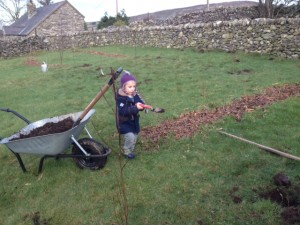 Grandson carrying compost from barrow to hole. It takes a lot of concentration

By planting trees we’re trying to create wind breaks to improve growing conditions on the rest of the land and to increase bio-diversity. There’s no reason why this land shouldn’t have a rich variety of wild life it once had and get back to a self-sustaining and improving ecosystem.

So a parcel arrives here for them, which isn’t unusual. Delivering up to their place is beyond most of the parcel firms. It turns out to be 50 Italian Alder ( Alnus Cordata) bare root saplings and they left half with us as a present!

It’s a fast growing tree, often grown to windbreak around orchards, that doesn’t mind wet soil. Eventually it can reach 24 metres high with a spread of 1 metre. Its leaves are dark green and glossy, 5cm across. 7.5cm yellow catkins form on the plants which also produce 3cm brown woody cones It retains its leaves late as well, helping in the windbreak role.

The 2 year old saplings are about 1.2M high with nicely developing roots. They’re in bud already so getting them in was a priority job.

With a little help (OK a lot of help) 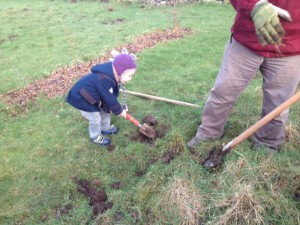 My son-in-law, Gary, came over along with the grandson to give a hand. Whilst grandson had a nap we made a good start. I cut and lifted a square of turf using my pointed Sneeboer spade and he followed, digging down with a normal spade whilst I did the next one.

Then it was in with the tree, dust with mycorrhizal fungi inoculant to help root growth and fill the hole with compost / soil mix. Tread down, give a drink and repeat. Halfway through we had a tea-break and then little man joined us to help.

He’s at that age where he likes helping. Bringing us a sapling from the pile is great fun but better still was trowel’s full of compost from the wheelbarrow. Some actually made it to the right hole!

We spaced them around a metre apart which should eventually create a thick hedge. I expect we’ll lop off the tops before they hit 24 metres, but that’s some years away yet.