One Job Creates Another, Help from the Grandson

The last few days have been lovely to look at, sunny at points and low winds, but freezing cold. Val’s been busy tidying up the borders and planning more tasks for me in case I get bored! 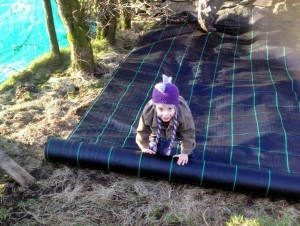 It’s funny how one job gives rise to another. Val asked me to find the grass shears which I thought were in the shed. 25 minutes later they finally turned up under a pile of other things.

Enough is enough, a tidy shed saves time. So a happy couple of hours banging in nails and screwing in hooks so the tools all now have a home. Even the shears and loppers! Nothing to do with it being a lot warmer in the shed than outside – honest.

Then there’s a load of branches from trimming the bushes to be shredded. I really should have found out my ear defenders because they were ringing all night from the noise. And to think I used to be up front by the speaker stacks at a rock gig back in the day! 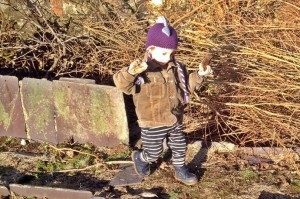 Carrying Rocks in the Noonday Sun,
I fought the law and the law won!

The herb bed has had a tidy up and then we made a start on laying weed suppressant matting in the walled garden. The matting isn’t permanent, it’s just to stop grass and weeds growing until I can get round to cultivating. It’s very much a two steps forward, one step back at the moment as there are so many things to do and only so much time to do it.

Son-in-law and grandson came back over and helped for a couple of hours. The little one is so happy when he’s helping. The trick is to find jobs he can do that are useful. They genuinely want to help and pick up very quickly if it’s a ‘makework’ job. Unrolling the matting was great fun but collecting rocks to weigh it down was the best.

I’m very aware that they will probably have to move away later this year. It’s very difficult finding work if you don’t speak Welsh around here. Considering only 20% of the Welsh speak Welsh across Wales as a whole, it seems very discriminatory.

Not like that in London where speaking English seems optional. Last time I stayed in London I had to sort out my room at the hotel in Spanish with the help of a Norwegian as the receptionist didn’t speak English. Those holidays came in useful.

Fun as it was with little Gabriel outside, after an hour his hands were icy. He really didn’t want to go in so we tempted him indoors with a hot chocolate. You can get a toddler to do anything with chocolate!

Leave a Comment Here on One Job Creates Another, Help from the Grandson Cancel reply