We’re quite lucky here in that we’ve got some decent garden centres fairly near by. Near by is a relative term, 15 miles is near when you live in the sticks! Now to me, a decent garden centre is one that has a good selection of seeds, plants and sundries at reasonable prices. Not one that has the over-priced gardening gear as an afterthought stuck behind the country clothing and conservatory furniture.

One that really sticks out is Tyddan Sachau. It’s down on the Llyn peninsular in a little place called Y Ffor or Four Crosses. It’s got a wide range of plants, bushes, trees and sundries etc. It’s got its own nurseries and greenhouses but what I really love is that they sell their seed potatoes from sacks by the kilo and even some seeds like broad beans and runner beans by weight as well.

So we have Arran Pilot, first early along with Swift as an alternative first early and Charlotte, a second early salad potato. Along with the Sarpo potatoes which arrived the other week, I’m set up for seed spuds for the season.

They’re all chitting in the potting shed which stays relatively warm. I’ve placed them so they’re in the light but shaded from direct sunlight so they don’t get too hot. The daytime temperatures, around 6 to 10 degrees C are perfect for chitting but the nights are cold. 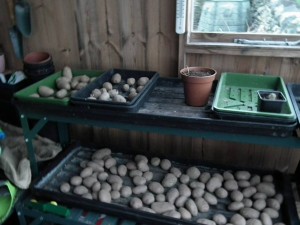 Potatoes Chitting – Sarpo Mira in the gravel tray, Charlotte and Arran Pilot in seed trays above and the rest of the Sarpo to the left

But since the nights are really quite cold, I’ve got them covered with sacks at night too keep the frost off. 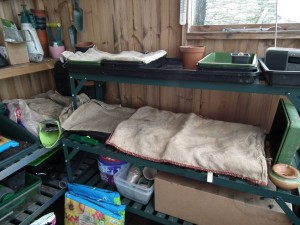 Potatoes Put to Bed – Nice and Cosy under the sacks

As I said in my post about the Sarpo potatoes, I’m growing a lot in bags this year. One thing I’m going to try is some really early potatoes in the greenhouse. If I get them in soon then I should be looking at a crop by early to mid May.

Unlike the outdoors crop these are going in 40 litre bags with carrying handles in the greenhouse. When the weather warms up then they can go outside. I’ll be putting 3 tubers per bag rather than just one as with the 20 litre outdoor bags. I’ll also need to up their feeding regime as they grow on because they won’t be sending their roots out into the ground. 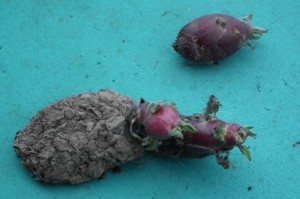 Old Seed Potato from Under the Bench

I dropped a trowel onto the floor and it went under the bench. As I retrieved it, I found a seed potato I must have dropped last year.

The tuber was all shrunken and wrinkled but attached to it were three chits. There’s probably a proper name for them but it’s not something I’ve come across before. One detached but they all look alive so I decided to pot them up and see what, if anything, happens.

The tuber with 2 chits attached into one pot and the remaining chit into a smaller, 3” pot. If they don’t grow then all I’ve lost is a bit of compost and time. I’ve no idea what variety so a real shot in the dark!