My Sarpo seed potatoes have arrived – I’ve a trial pack giving me 8 tubers each of Blue Danube, Kifli and Axona along with 5 kilos of Mira. I’d have liked 2 trial packs really but it’s a bit late now. 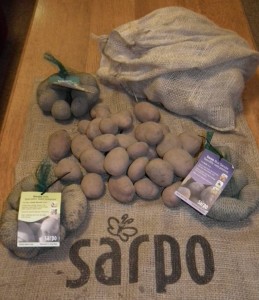 This year I’m going to grow my potatoes in the walled garden rather than the raised beds in the field. The raised beds have had potatoes in on alternate years for 5 years and that’s pushing it. Last year we had a lot of scab and yields weren’t that great.

I’ve not got the soil prepared in the walled garden, it’s full of stones for a start, so I’m going to grow all my potatoes, except for the Sarpo Mira, as the show growers do – in bags.

The Mira is a thug, tough as old boots. It’s ideal for new plots and converted pasture, shading out most weeds and it’s dense flesh seems to repel both slug and worm. The Mira can go in the ground direct and, so long as I keep them well fed, I should get a pretty big crop without a lot of trouble.

The reason for using the show growing method with the other potatoes isn’t that I want to show them, I want a good clean crop with a decent yield without having the ground in good order.

I’ll need bags, compost and fertiliser. The obvious place for show growing supplies is the top show grower in the UK’s shop – Medwyns of Anglesey.

First of all the bags. Usually these are 17 litre but Medwyn’s are actually 20 litre and have extra holes drilled in the bottom to allow the roots easier access to the soil beneath. Since he uses his own products growing his prize-winning vegetables, Strangely they’re about the same price as standard ones on Ebay.

Next the compost. Last November we hit upon a load of Westlands compost reduced to silly money in Porthmadog so I’ve 800 litres plus of that in the shed. I’ll also try a a couple of bags of Medwyns potato growing mixture. He’s geared to deliver only in pallet loads but since we’re local I can collect a couple of bags and then compare results with cheapo compost.

Finally I’ll need fertiliser. As well as the Sarpo, I’ll be growing some Arran Pilot and Charlotte so most likely I’ll be using 40 bags. For each bag I’ll want about 60 grams since the compost will contain some fertiliser already. So that’s 2.4 Kg in total.

Plus I’ll need about another 60 grams per metre run of the trench under the bags. Say 20 metres run. That’s another 1.2 Kg making 3.6 Kg in all. Looks like a 5 Kg pack

Next I’ll probably need some additional fertiliser for the Sarpo Mira in the ground. Now I know from experience that Mira take a fair bit of space so instead of spacing them at 40 cm apart in the row, I’ll go for 60 cm in rows 1 metre apart. I’ve roughly 80 tubers so that’s 48 square metres.

Now if I can get a decent amount of horse manure in, I won’t need a huge amount of fertiliser but I could just use fish, blood and bone or Growmore – both of which I’ve got in store, instead of specific potato fertiliser. Later in the season I will be able to give them comfrey feed.

Now in an ideal world I’d have had them out in the shed to chit immediately they arrived but since the rain today was literally like a power shower, I decided running to the shed could wait a day!