Growing Potatoes in Bags in the Greenhouse

The original plan was to have two bags of first earlies in the greenhouse to see about getting an early crop. But we don’t need no stinking plans! I bought 2 bags and then my daughter popped over with a present. 3 potato bags.

Mine are just 40 litre plastic affairs, adequate enough, but hers are near 50 litres and a sort of fabric. A Rolls Royce of a potato bag!

Anyway, plans out of the window so here’s what I did. 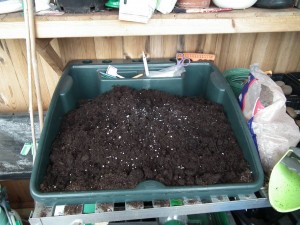 Mixing Potato Growing Compost – crumble the multi-purpose, sprinkle with potato fertiliser and mix before adding to the bags

Since I’ve about 800 litres of Westland Gro-sure multi-purpose compost in store that’s what I’m using. It states that there’s enough nutrients for 4 months in the compost but it’s last year’s so I’m not certain how good it is.

It’s in 20 litre bags, very convenient and back-friendly. It’s a lovely compost but very compressed – I presume from being stacked so long. Empty a sack at a time onto my potting tray and crumble it up by rubbing between my palms which took a fair while.

I then gave it a sprinkling of potato fertiliser. Probably about 15 to 20 grams per 20 litres. Mixed thoroughly by hand. If it wasn’t a feed containing compost I’d have used at least double the amount of fertiliser but I don’t want to over do it. 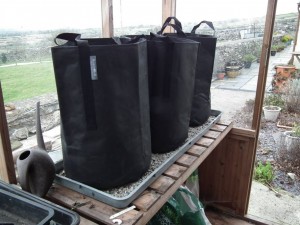 In my slightly smaller 40 litre bags I put about 15 cm (6 inches in proper money) of compost and bounced the bag to firm it up – bit like tapping a pot on the bench to settle the compost only on a larger scale.

Next I put 3 small seed potatoes in each bag, arranged in a triangle. Then topped with compost to a couple of centimetres (or an inch for those traditionalists amongst us) above the tuber. Popped a plant label in to each bag.

In the large bags I started with 20 cm (8 twelfths of a foot or .458 Roman cubits if you prefer) of compost before adding the seed potatoes. 3 to a bag as before. Two bags got swift, which is a first early and the third had Charlotte a second early salad potato. 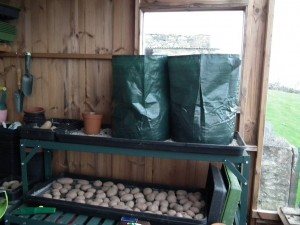 All then got a light watering with rainwater from the butts. Our tap-water is pretty soft but I don’t want to increase the pH at all and tap water can do that. I used the finest rose on the can so the water saturated the compost well.

At this stage I don’t want the compost too wet – just wet enough to stimulate and support the seed tuber starting to develop.

Once the haulm (foliage) starts to show I’ll begin topping up with more compost, replicating the earthing up process we do outside.

One comment on “Growing Potatoes in Bags in the Greenhouse”