The term ‘early’ in vegetable growing is a bit confusing, it doesn’t mean early in the sense of early in the season so much as ‘quick’. We seem a bit short of carrots so I’ve sowed a raised bed with an early variety that should crop although it is late in the season. 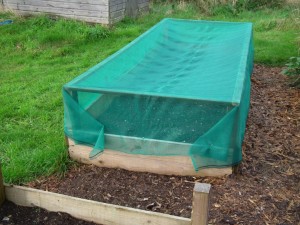 The bed had had garlic in and potatoes the year before which will have used up a lot of a nutrients which need replacing. Added a good handful of fish, blood & bone per square yard and raked it well in after running the Mantis over the bed to loosen the soil.

I then firmed up the surface by lightly ramming the rake over before drawing very shallow drills about 10cm (4”) apart across the bed and then sowed the last of a packet of pelleted seed, carrot Early Nantes 2, about 5cm (2”) apart. I do like pelleted seed, it’s really easy to sow at the correct spacing and avoid thinning out.

The variety, Early Nantes 2, take 12 weeks to mature so they should be fully ready in early November. Normally I’d say this was too late but we tend to get a good September here and, with a little luck, October too.

Although we’re high which reduces temperatures we’re also quite near the sea which moderates temperatures so we rarely get a frost. We do get wind though and that causes wind-chill which slows growth so I’ve wrapped the bed with windbreak netting to protect the plants and create a slightly warmer micro-climate. All I need now is a little luck with the weather. 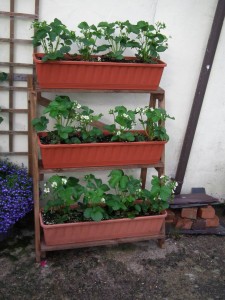 I had a go at propagating strawberry runners that were cut off the parent plant rather than letting them root into pots prior to cutting them free. I didn’t have great hopes that it would work, all the authorities state to root the runners whilst they’re attached to the parent plant. Well, they’re right. Still, if it had worked I’d have gained plants and all I’ve lost is a bit of time and compost.

The Vibrant strawberries I planted into the troughs on the new stand are looking good. I will get some strawberries despite the problems this year with the blessed sheep getting in to the garden and eating everything in sight. 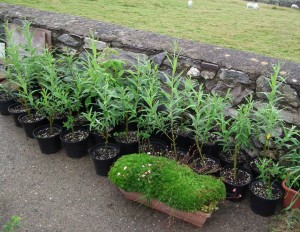 Willow Saplings in Pots, Ready to Plant Out

I’ve 22 willow tree saplings ready to plant out. Willow must be the easiest tree to propagate from cuttings. All I did was to take some branches and cut them into 30cm (a foot) lengths which went into a trough of light compost until they rooted and then into individual pots. They had a set-back when the sheep attacked but have recovered and are ready to go into the ground now.

In a few years they’ll be up enough to start shielding from the wind which will allow a more diverse range of trees and bushes to grow up in their shelter. It’s a bit odd planting up something that I know I’m unlikely to see the full benefit of. I just hope whoever follows me here feels the same about improving the ecology.