Catching Up in Better Weather

At last the weather seems to be improving – and about time. On the whole August felt more like October than summer, at least here in N Wales if not the rest of Britain. I’ve been grabbing the opportunity to get outside and catch up as best I can with everything. 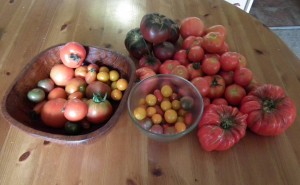 In the greenhouse the tomatoes are ripening, albeit slowly. It’s probably as well that they’ve not all ripened at once as we’re already having problems coping with them. I’ve started removing leaves now to assist ripening. Not all of them, just the ones looking poorly or shading the fruit. Luckily the tomato is such a versatile vegetable (yes, I know they’re technically a fruit. You put custard on them if you like!)

If you find you’ve more than you can cope with you can just bag them up and freeze them to use in cooking later. It’s not the ‘approved’ way to do it and we’ve always said that you should use them within a few months. I did, however, find a bag frozen last year when I sorted the freezer out and they were absolutely fine.

I took the advice of Andy and got a tin of carburettor cleaning spray which has cured the problem with my Mantis tiller. I’m going to use it on the Merry Tiller as well. It runs well enough but I think it will improve the performance.

I mentioned something biting me a couple of weeks ago, see here. Well whatever it was I’ve still got a little crater on my hand and it still itches. Very odd.

As I’m clearing the raised beds now, I’m sowing a mustard green manure. If nothing else, it will swamp out any weeds. I’ll not be directly using the mustard in the beds but will compost them on the heap.

Two of the raised beds have leeks in, and two are reserved: one for garlic and one for shallots which will be going in later. I’ll cover those with weed matting until I’m ready to plant.

One thing that does grow well here is grass. The soil is thin and poor but it grows on. Grass (as a family) is probably the most important plant on earth. Grass is remarkable in that it can be eaten down to the ground and just grows back, hence its value for feeding livestock. Varieties of grass also feed us – wheat, rice etc. are all grasses. Without grass we would be well up the proverbial creek without a paddle. Incidentally, there was a book written about what would happen if a disease wiped out grass in the 1950’s – scary stuff but it’s a good read. The Death of Grass by John Christopher

Anyway for all it’s benefits, it’s a also a nuisance. Seed drifts in from nearby fields and given half a chance it will swamp most anything else. Having laid weed matting down on the decorative borders, I’ve seen how the bushes do so much better without the competition. So I’m mulching around the leylandii I planted this year.

I’m not using weed matting for them, just cardboard covered with bark chippings which I picked up a trailer load of recently. It will only last a year or possibly two but that will help them get established and growing strongly before the mulch has rotted in and the grass taken over.