Finally some decent weather, warm enough but not so hot you avoid being in the sun. There’s something about a light blue sky with just a few fluffy white clouds that makes life worth living.

Something, I know not what, bit my hand whilst I was mulching around the new windbreak hedge. I didn’t notice at first but that evening my hand was itching so much it actually woke me up in the night. The next morning it had swollen up to the point where I couldn’t bend my fingers fully.

By the evening it had gone down a bit and the next day was normal again although still itching. A pal reckoned it was the false widow spider that has been spreading up the country but none have been spotted this far north.. yet. Whatever it was, I just hope I don’t meet it again. 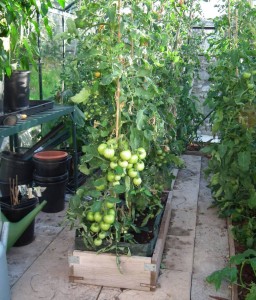 Loads of Tomatoes but When will they Ripen?

The tomatoes are being slow to ripen, which isn’t such a bad thing. We’re just about coping with the ones that do. The small plums are lovely cooked but not so nice raw, ideally I’d prefer full sized plums like San Marzano or Roma.

Trouble with those is that they take up too much room for the greenhouse and the climate here isn’t good for outdoor tomatoes. Being 200 metres up our temperatures tend to be a couple of degrees lower than down by the coast and with the strong winds, cloches tend to just blow away. What we need is a big, strong polytunnel.

The first tomatoes to arrive were, as usual, Sungold. These are so sweet that they’ll tempt the most fussy little one to eat them. Freshly picked they’re just wonderful. They make a nice contrast with a sharp cheddar cheese or a blue cheese.

The dark coloured varieties like Black Russian make a great tomato salad with a little salt, garlic and olive oil. My old favourite Ailsa Craig are just starting to ripen. I don’t think you can beat a simple cheese and tomato sandwich with them although they work brilliantly toasted on top of cheese on toast.

The peppers are coming in now. You can freeze peppers but they’re best eaten fresh whether raw in a salad or cooked as they’re always soggy after freezing. I think people forget the benefit of eating seasonally is that nature rings the changes and we don’t get bored by eating the same old thing day in, day out.

I made us stuffed peppers for tea which I thought were really tasty but Val wasn’t so keen. I slipped in a couple of teeny tiny chillies that I picked at the same time as the sweet peppers and it was a bit hot for her tastes. Strangely neither was the cat keen. 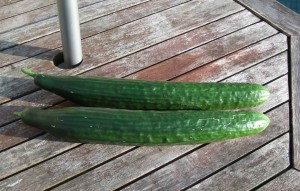 We’ve a glut of cucumbers too. Val turned the excess into a soup; a variation on this cucumber soup recipe, adding some cream cheese and cream. She’d barely finished when I found another two nice fruits hidden behind the leaves. Strangely she wasn’t overjoyed!

The aubergines have been a failure this year. Not my favourite but I usually grow a couple of plants and they’re fairly easy to grow. It may be the whitefly but for some reason this year they’ve not set any fruits. Loads of flowers but they’ve come to nothing. Oh well, you can’t win them all.