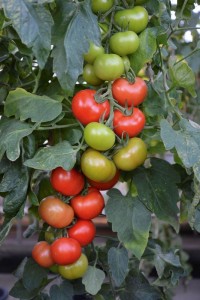 Suttons seeds have announced a new tomato variety, Crimson Crush, that they claim to be resistant to all the common blight strains in the UK. The problem with potato and tomato blight resistant strains is that there are a number of different strains of blight.

These strains inter-breed and one year a plant shrugs off an attack but the next year a different strain hits and brings it down. Rather like the different strains of flu each year we humans have to cope with.

Greenhouse tomatoes tend to do better with blight as the spores are kept off the plants but in recent years growing outdoor tomatoes has become almost impossible in some areas due to blight with varieties such as Fantasio and Ferline succumbing to infection.

What makes Crimson Crush different is that the plant contains two different genes, both of which impart resistance. This is why Suttons are confident that they have a winner in the blight war.

It’s bred for outdoor growing, I assume in sheltered areas, with good yields of large round tomatoes weighing up to 200 gr each, said to have good flavour. It’s available direct from Suttons as 3 plug plants for £7.99 delivered in April for May / June planting. Crimson Crush Tomato

Armillatox End of an Era?

Garden hygiene product Armillatox has been used for many years as a cleaner and a sterilant. In 2003 it was re-badged as a cleaner because of EU legislation which demands very expensive testing for products sold as pesticide. At £3 million pounds these tests are prohibitive for all except the giant companies.

The formula was the same though and many growers still found it of great value against fungal diseases in onions and roses, honey fungus, vine weevil, toxocara canis eggs and the dreaded brassica clubroot.

However a critical chemical used in the formulation is no longer being produced so the product is being re-formulated. When I spoke to them today they were unable to confirm exactly when the product would again be available and if it would still be of value against the diseases it was (outside of the EU!!)

Hopefully ‘Armillatox Soap Based Outdoor Cleaner’ that is of use against clubroot outside of Europe will be back.