Usually we find ourselves watching the weather and envying those in the south east with their warm dry weather but not in this heatwave. It’s been quite hot enough, thanks and we’ve missed out on the storms that followed.

I knew we were in for a scorcher on Friday when the outside thermometer was reading 25 at 9.30am. One good thing about living in an old stone house which is a nightmare to heat is that it is cool in super-hot weather though.

The ‘jobs to do’ list is pretty huge so I thought it was a perfect day to make a dent on it but pretty soon realised it was just too hot and close for anything strenuous. It reminded me of some weeks we spent in Barcelona with friends who were living there one summer.

Generally the day started soon after dawn, around 6am, with some hours spent in the garden until around 11am when it was getting too hot for comfort. Then a long leisurely lunch followed by a siesta in the oppressive afternoon heat until it cooled enough to get back out, between 4 and 5pm.

Then work through until the sun started to go down when we’d flood the channels between the plants that was the irrigation system. Then a shower before heading out for a meal around 10pm. Happy days!

I did manage to tick a couple of things off the list. A last sowing of Little Gem lettuce and some cut and come again mixed leaves in troughs. The problem with container growing here is that our cats consider containers of soft compost to be litter trays so to keep them off I poke short sticks into the containers and lay sticks across. 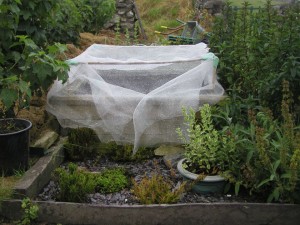 In the herb bed I’ve a 1 metre square raised bed which had some rows of carrots sown into it. I’ve got some pelleted seed that is big enough to handle unlike ‘raw’ carrot seed. I made a channel by pressing an angle iron into the soil and sowed the seeds about an inch apart. Rows were just about 3” apart with spring onions every third row.

Normally I sow spring onions as thinly as possible in a row but I’m experimenting this year and in one row I’ve dropped a pinch of seeds every 4” which will grow a clump. We’ll see how this one ends up when it comes to harvest time.

The final two rows of carrots had radish (French Breakfast 3) sown between the carrots. They’ll have been harvested before the carrots are crowded so I’m using free space.

Having sown it was time to construct an anti-cat barrier. A root around the shed turned up some insect mesh and just in time I returned to the bed where one of the cats was preparing to dig! A bit of measuring and cutting, then draped it over the bamboo frame. Fingers crossed it remains secure or some serious discussions with the rodent control operatives will take place.