Finally finished the greenhouse floor. The weather was cloudy and it drizzled most of the day which meant the greenhouse was bearable so I laid the slabs with a concrete edging. 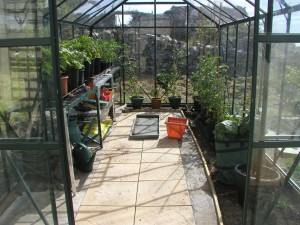 Ideally I would have used the 2′ square thick slabs but they weigh a ton and mauling them around kills my back so the thin 18” slabs were used. My cement has seen better days as well, It hadn’t quite set in the bag but it did need the lumps breaking up before mixing. Fingers crossed it will be OK.

The next construction job will be a path to the right between the greenhouse and the blackcurrants, three feet wide. I’ll put some coldframes onto that for next spring. I made a start by laying a piece of slate 2′ x 3′. It looks rather good.

There’s something very satisfying about using free materials, giving things a use that otherwise wouldn’t. There’s a lot of slate in Snowdonia. Now, of course, slate for roofing is more likely to come from China where labour is cheap.

It takes quite some time mixing concrete by hand but I don’t think I can really justify buying a cement mixer, tempting though it is. Hiring is an option but when you look at the costs and the bother of collecting and returning it’s not that brilliant. Plus, of course, the week we’d hire one it is bound to pour with rain!

The peppers are going great guns but they’re getting a little pot-bound so moving them up into larger pots. Most of my large pots are actually the ones the supermarkets have cut flowers delivered in with holes drilled out in the base.

We picked up a couple of 5 gallon builder buckets from Aldi for 99p and I realised they’d make great ‘large pots’ for growing in. Next time they’re selling them I’ll stock up.

I had moved my aubergine to a large pot but I think it might benefit it to move up yet again into a larger decorative tub. I’ve a few of those around, comes from being an inveterate end-of-season bargain buyer. I’m not that keen on aubergines, but it’s nice to have a few home grown ones and this plant looks promising to deliver.

The sickly tomato plants I was given have surprised me, they’re doing very well even if they’re behind the other ones. I think I’ll be moving them up into full pots in a week or so. In three weeks they’ve doubled in height, thickened up and greened up.

Side Shoot Removal on Tomatoes 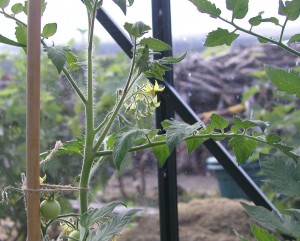 When you’ve been growing for years it’s easy to forget how confusing things can be for beginners. I’ve had emails in the past where people have carefully removed all the sideshoots only to get no fruit develop. I realised they were stripping the fruiting vine.

Simply put (I hope!) sideshoots always grow from the joint between a leaf and the stem. The fruiting vine comes directly off the stem. To illustrate this I’ve taken a photo showing both the sideshoot and the vine. Fingers crossed it helps people.