Problems, panics and a new grandson

I’d best start with an apology for not having posted anything all month. They say it never rains but it pours and that’s proven very true. It’s been an incredibly busy month for us with complications thrown in on top.

First of all, I’ve had a couple of medical problems. Nothing too serious but enough to get me down. I noticed a blurring in my vision a while back and when I finally got to see a specialist she confirmed that I’m developing a cataract. She was Spanish (I think) and at first I thought she said I was growing a cactus in my eye. Cataract seems most likely though.

This makes using the computer a bit tricky – strangely sometimes the screen is fine and at other times it’s like looking through grease smeared on my specs.

The other problem is my back. I shifted some logs and felt a twinge. When I straightened up, oh boy. My sciatica is back with a vengeance. The pain isn’t in my back but it feels like my heel has been badly bruised. What’s odd is that it can swap, one minute the right, the next the left heel.

So between those, I’m a bit limited. But the really important thing is this. Our daughter was expecting but we had some panics along the way. She’s had a really rough pregnancy and spent quite a few nights in hospital. Then she went in for a routine check and they decided to deliver him early with a C section.

Initially there were no major problems but with him but because he was premature they had him in an incubator and on additional oxygen. He also had some jaundice so they had him under the lights (I’m told they’re not grow lights!)

Eventually he was allowed home but took a few steps backwards and was re-admitted into hospital for a few days, which was a worry to say the least.

I’m happy to say he’s back at home, putting weight on and demonstrating he’s got a good set of lungs when he wants feeding. Hopefully life will settle down for us all now and we won’t be racing across the country in a panic.

A big welcome to Gabriel John Martin – isn’t he lovely? 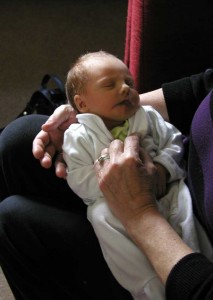 12 comments on “Problems, panics and a new grandson”

Leave a Comment Here on Problems, panics and a new grandson Cancel reply