The weather continues to be generally rubbish here. I do keep wondering if moving to the wettest part of Britain was the wisest move ever. When the sun shines, it’s wonderful but that’s a pretty rare event this year.

Medwyn Wiliams, the famous show grower, told me this was the worst growing year he could recall and that he was not entering some vegetable shows for lack of produce of the right standard. When the top show grower is having problems, we all are!

Sunday was a pleasant day though so we spent it on the plot. The greenhouse is suffering from lack of ventilation. Because the weather is cold, the automatic vents remain shut and leaving the manual vents and doors shuts means stagnant, damp air. A few tomatoes had become covered in mould.

I’m afraid I’ve overplanted in the greenhouse, which doesn’t help. In an attempt to rectify things, I’ve removed some excess foliage on the tomato plants. Hopefully this will help ripen the tomatoes. The next step, if they don’t turn, is to pop some ripe bananas in to release ethylene gas.

The cucumber plants look a bit sad but continue to produce enough for us and a small branch of Tesco, so no complaints there. The peppers are swelling and ripening well, we’ve got some ripe and very hot chilli peppers too.

When the potatoes came down with blight, I cut off the haulm and left them undisturbed to try and avoid the spores getting onto the tubers. The first earlies have had some blight and rot problems in store, but I don’t think they were totally dry when we sacked them which wouldn’t help.

Anyway, dug up the bed and we’ve a nice crop of Charlotte. Many are too small, but at least some reward for our effort and a return on the seed.

The reds (can’t remember the variety offhand) are reasonable but covered in small white spots. These aren’t yet another problem thank goodness, but lenticels. Lenticels are minute organs used by the tuber to breathe but in waterlogged soils they become blocked and swell up.

Normally you don’t see them at all, but you can see them when swollen (see photo at the end). It’s not good news though, the swollen lenticels means the potato is more susceptible to soft rot and, at best, you’ll need to use quickly and check frequently for rot in store.

At least we don’t have potato stem rot which is similar to blight in appearance, unlike the tenants of one allotment site who emailed me saying:

“While not as serious as Potato Blight this is still a highly infectious fungal disease that is spread by windborne spores.  These can live in the soil for years and will infect potatoes planted again next year given the same weather conditions.  Plotholders are to be advised to cut down the stems immediately, remove every piece of the plant,  take this home dry it and then burn it. As you will realise the chances of everyone doing that are nil!!   They will take it away and put it in the Brown Bin and so spread it even further.  The potatoes in the ground will be unaffected and may be left there for a few weeks.”

Lenticels – the White Spots on these Potatoes 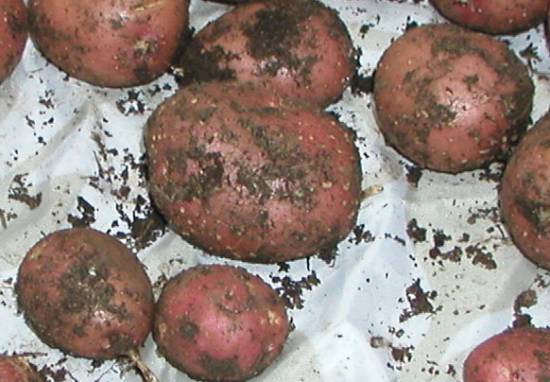