Win some and lose some

We’ve actually had some reasonable weather for a change. It’s very much autumn sunshine, warm when you’re in it but a slight chill in the shade and as evening falls. The nights are drawing in as well, which means less time for those who like to get onto the plot after work. Frustrating stuff, work, but it does help pay the bills!

Wednesday was particularly frustrating, the day started wonderfully with sunshine and carried on like that all day but I was sat on a train to London. Coming down and east from North Wales, the differences in growing conditions were so obvious as I stared longingly out of the carriage window at the allotments dotted alongside the railway line. The south east is a good two or three weeks ahead of us.

Water is, of course, required for successful growing but sunshine and warmth pay a big part. It’s easy to cope with a lack of water, collecting rainfall in butts etc. Maybe a little expensive unless you’re creative about what you store your water in. Don’t forget sheds, greenhouses and polytunnels can all be considered as water collectors.

It may seem a bit silly talking about collecting and saving water as the growing season heads towards a close and after the wettest summer for 100 years but don’t forget we started the year talking of hosepipe bans and drought. Next year could be another 1976. For younger readers, 1976 was blistering hot and the music was brilliant too.

I’ve yet to find a way of economically generating warm sunshine! 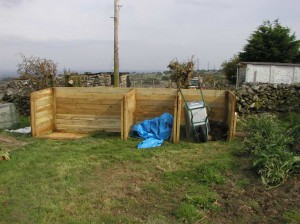 Anyway, there’s been some progress on the plot… and some setbacks. The massive pile of hawthorn trimmings have been converted to potash. Initially I had thought to shred them and compost but hawthorn is such a hard and tangled wood that it wasn’t practical unless I hired a professional chipper. So bonfires it was.

The new compost bins are going up. OK, they’re a bit OTT for an average allotment but I really need to make as much compost as I possibly can to improve this awful soil. The individual bin size, 1.7 cubic metres, should be enough to allow for heating.

Now for the setbacks. The brassicas have been massacred. The final straw was that I must have missed some butterfly eggs and a ravenous hoard of caterpillars have struck. By the time I realised it was too late. 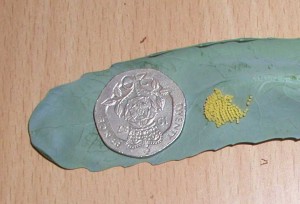 Next year I’ll have the Wonderwall up and they’ll be safer from butterflies and less prone to windrock. Add in some nematodes to decimate the slug population and we might well get a reasonable crop.

The sweetcorn is another disaster. I knew it was a real gamble but hoped I’d get away with it. Firstly the soil preparation wasn’t good enough. It’s too shallow and even adding artificial fertilisers hasn’t compensated for that. Secondly, I was a bit late getting it in and going. Thirdly they’re too exposed. The wind has actually blown some out of the ground. They might have done better if they’d had enough depth of soil to hold them but next year they’ll get a windbreak as well as better soil depth.

The good news is, I suppose, that next summer can’t be as bad as this one has been and I know where things have gone wrong so I can put them right. I did have an email from someone who had read my page on growing giant pumpkins but had failed. Someone had suggested to him that the reason was lack of bees to pollinate which meant I should recommend hand-pollination in the article but I’m not at all sure that’s the problem. It’s not been a good year for pumpkins and squash by all reports.