One of the nice things about running this web site is that I get sent things to try out occasionally. This time I’ve been sent a new spade and a stirrup hoe. 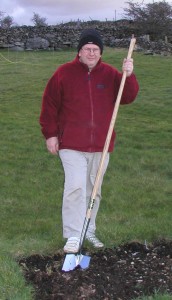 One thing all gardeners should know is that it is important to have a spade with a handle that is long enough. Too short handles mean that you never straighten up whilst digging and backache is a certainty.

First thing I noticed was the stainless blade, nicely made with a curved top so making pressing down easy. I really can’t use spades with sharp tops and don’t understand how anyone else can either.

The wooden handle was lovely, slotting into a deep tube. You just know it’s a quality tool when you handle it. Bit like a car, you don’t need to be Clarkson to know a Rolls Royce is well made.

You don’t use it in exactly the same way as a normal spade, the idea is to avoid backache caused by bending. However, you need to keep in mind that the handle can exert a lot of leverage and you could break it.

Cleverly, Alan shows you exactly how to use it efficiently and easily on his web site. It does take a few minutes to get used to the new way of digging but it’s surprisingly easy. The best thing is you avoid bending and if you suffer with a bad back, well worth giving a try. 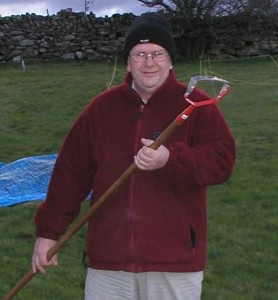 For years now I’ve had two hoes in my shed, a Dutch hoe for weeding and a draw hoe that I use for drawing a trench or earthing up. Now I must admit that, after years of practice, I rarely cut a plant off with the hoe but it does happen.

The Dutch hoe is pushed and usually accidents happen when I push too hard but the stirrup hoe is worked by pulling the blade back. This does make it easier to control I’d suggest a lot easier for someone who’s not used to hoeing.

The blade is self-sharpening too, pulling it through the soil keeps the blade with a good edge whereas I have to stop every half hour and sharpen my Dutch how.

I haven’t had chance to give it a really good trial yet but just clearing one bed makes me think my Dutch hoe is going to be retired soon.

Happily, it’s not expensive to buy the stirrup hoe, which comes either as head only or you can buy it with a handle but most good hardware shops will sell a broom handle that will do the job for a couple of pounds.