Fat of the Land & Lawnmower Review

Fat of the Land

Well the leg is still not right, so Saturday being not the best of weather I decided to have a really lazy day and rest it. I’m re-reading a copy of John Seymour’s The Fat of the Land

My copy vanished some years ago. I hate lending books as some people – you know who you are – don’t return them! So I bought it again.

It’s some 30 years (I know, it’s hard to believe I’m over 30 looking at my photo) since I last read it and it’s still good. In some ways it’s a historical document now, fifty years since it was written and published. But his attitude and comments on modern life and agriculture in particular are as fresh and relevant today as the day it was written – more so in fact.

With the benefit of age and experience, I must admit to thinking he had a tendency to exaggerate a bit and wore rose tinted specs at times. Even so, a great read. This copy will not be lent out!

Sunday the weather improved a bit although it spat a little during the day. Late afternoon it really brightened up and the sun actually shone. Not what you expect for August though. 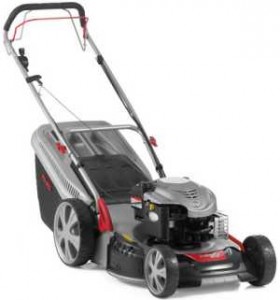 I mentioned buying a lawnmower last week. Whilst not being a nightmare like my metal shed purchase, the instructions made setting it up seem pretty complex. So I called on my nice neighbour to the rear who immediately came down the hill to help me.

Together we had it assembled, oiled and fuelled in no time. I passed him the bits and he did it, to be honest. Now, a massive thank you to forum member Gwiz who recommended the Al-Ko machine to me. It’s wonderful.

The Briggs & Stratton 1200 engine is a joy to start. Take up the slack, pull the cord and it starts. No messing and not even a hard pull. No choke to mess around with either.

The height adjuster is a doddle – one large lever alters it from 75mm cut down to 25mm cut.  I need a high cut as there are lots of stones on the field surface and I don’t want to damage the blades but it will also do a fine lawn.

There are just three controls; a throttle for the engine speed, a bar that makes the wheels turn and a deadman bar that stops the engine if released. It’s not too heavy to push with the power switched off to the wheels on the flat but I wouldn’t like to push it by hand up the slope of the hill.

The engine speed (throttle) needs to be full on for very tall grass but for shorter grass you can save fuel by running it slower.

I started by running over the path to the gate with the grass collector on. Went over it on the high cut and then again on a lower cut. It looks a lot better now! The bit at the end was done manually and it really was no more to push than my little electric flymo – except I didn’t have to keep avoiding the cable.

Next it was the sloping field around the veg plots. Now I must admit, looking at the job to do, I wondered if I should have a tractor with mower. However it did a great job.

I took the grass box off for this and fitted the side-discharge guide. I think it finds it easier to throw the grass out the side when it’s long. It did make the machine a bit wide for the path though so that was done on rear discharge. There is a mulch plug as well but I’ve not tried that yet.

So, if you’ve a large area to mow then I can whole heartedly recommend this mower. We’ve got the large 52cm cut model but they do smaller ones as well. The Al-Ko mowers are not cheap, but they’re really well designed and built to last.