How to Make Marmalade

Marmalade making is very similar to jam making but the rind needs much longer cooking so more water is required. The fruit is simmered until the rind is soft and the volume of liquid has reduced by about half. 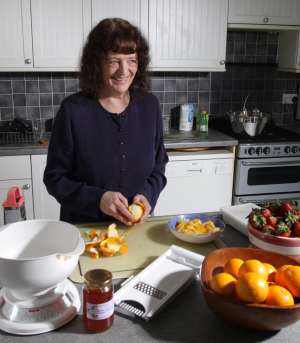 Jelly marmalades are made in the same way but are strained through a jelly bag after the fruit has been cooked and strips of rind are then added.

Although the bitter Seville oranges with their short season of December to February in the shops are most popular, any citrus fruit can be used for making marmalade.

Bitter or sweet oranges, lemons, grapefruit, tangerines, satsumas etc. on their own or in various combinations. You can use the marmalade process with other fruits such as quince where it serves to soften tough rinds.

Flavourings such as ginger, Armagnac, whisky, rum, brandy, treacle and apricots can be added but the citrus flavour must predominate.

The same equipment is required for making marmalade that is used for jams and jellies with the addition of a good sharp knife and a juice extractor. You will also find some weighing scales that are large enough to take your preserving pan and adjustable to compensate for the weight of the pan really useful.

The pectin in citrus fruit is contained in the white pith and pips. Extra acid is often added to ensure a good set as only about 450 g (1 lb) of fruit is used to make 1.4 kg (3 lb) of marmalade.

Wash the fruit carefully and remove the peel very thinly, removing as much pith as possible. Cut the peel into fine strips and tie in a piece of muslin. Cut the remaining fruit and pith into pieces and place in a bowl, together with the muslin bag.