Keeping very busy on the plots, in the greenhouses and the potting shed. Hence no diary entries for a bit! Too busy doing to be reporting. It’s been a slow start but I’m catching up now. 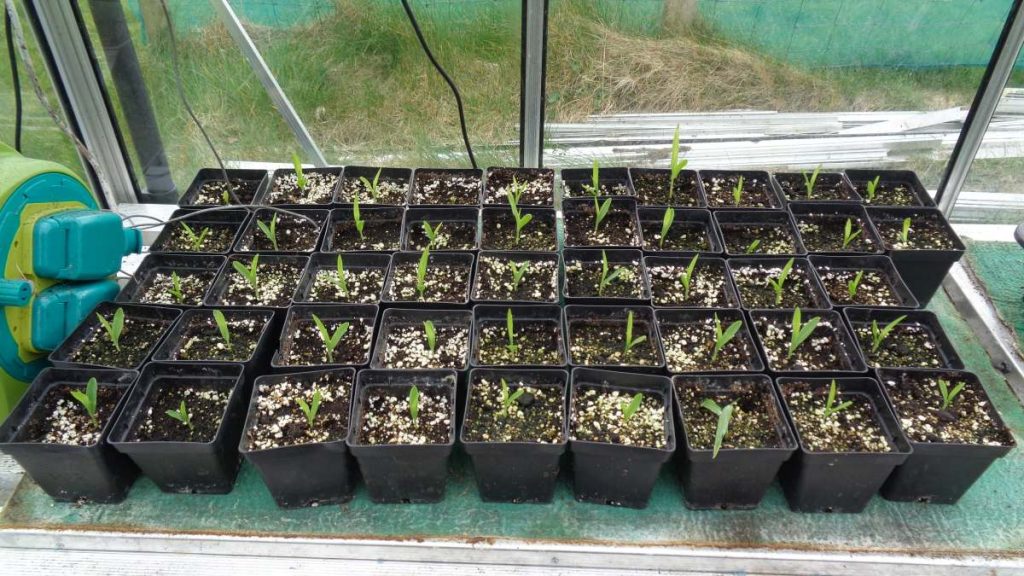 Sweetcorn to plant out

Chitted my sweetcorn as usual and then potted up the germinated seeds prior to planting out in the polytunnel. Variety: Swift. Quite interesting looking at how it’s gone. Bought a pack of 55 seeds which contained 57 seeds. Of these 2 failed to germinate so ended up with 55 germinated – 100% ain’t bad!

Popped into 4” pots which were filled with multi-purpose compost mixed 3:1 with vermiculite and watered with warm water so the seeds were not shocked by going into cold compost.

Some seeds had a root about 2cm long with a tiny green shoot but some only a small root and no shoot. I suppose some seeds just fail, which is why plants make so may seeds. I potted these up anyway just to see what would happen.

7 failed to grow, this demonstrates the difference between germination and seedling emergence quite nicely. Final score, from a nominal pack of 55 seeds I’ve had 47 seedlings emerge. 85% is a pretty reasonable result. I actually need 21 for the polytunnel and hopefully the others will survive the walled veg garden.

I’ve got Casablanca in the polytunnel deep raised bed which are looking well and Casablanca and Colleen planted in a raised bed outside. Both are first earlies and should follow nicely to keep us going until the second earlies and maincrops come in.

We’ve just planted Charlottes, Orla and most of the Scapa in the field plot. This leaves a few Scapa, Kifli, Sarpos Axona, Sarpo Mira and some Setanta to go in as soon as we can. Full details on the order here: Ordering Seed Potatoes for 2022

We used the Mantis to draw the trenches about 2’6” (75cm) apart and put the potatoes in at 15” (40cm) spacing. It’s a little more space than recommended but we’re not short of space and I want to maximise yield. 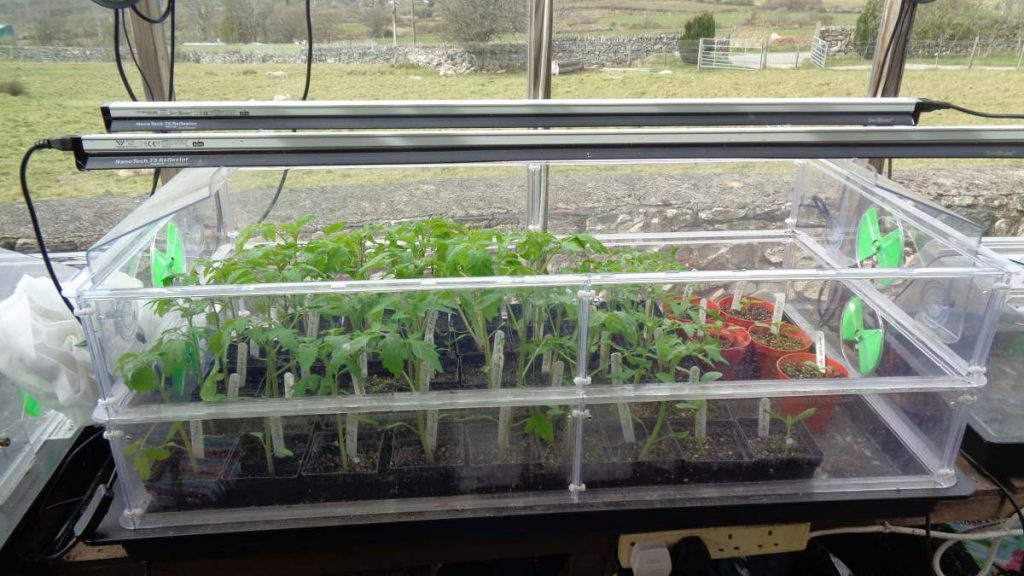 The tomatoes are doing really well in the Vitopod propagator. They get some 6 hours a day of supplementary lighting which seems to be trick. The Vitopods are very efficient, you start with one side layer then move to two as the plants grow taller. I’m actually up to 3 layers now! The photo was taken last Sunday.

I’ll be planting out as soon as I can now. Some in Quadgrows, some in the border and a couple of Sungold in large pots for my daughter. Her new garden is as high as ours but very sheltered so they should be OK outside. My grandson will probably snaffle them as soon as they’re ripe.

I’d picked up a couple of bags of a multi-purpose compost that I’ve not used before. It’s had some good comments from forum members so I thought worth a try. I wasn’t particularly impressed but sieved some and mixed with vermiculite to fill Bustaseed modules and pricked out then planted some cauliflower seedlings.

Well they didn’t thrive. Yellowish leaves which didn’t respond to fertiliser and some distorted, misshapen leaves as well as if suffering from herbicide. I suspect some aminopyralid or similar persistent herbicide contaminated material has got in to the compost mix.

Transplanted the healthiest looking into my usual compost and hoping they recover. It could be something else but I’m 90% sure it’s contaminated compost.