Supermarkets are limiting the amount of cooking oils people can buy. Tesco stated “To make sure all of our customers can continue to get what they need, we’ve introduced a temporary buying limit of three items per customer on products from our cooking oil range.”

Part of this is down to panic buying and hoarding although there is already a serious shortage of sunflower oil due to the Russian invasion of Ukraine. It’s not a full rationing system as we had during and for years after WW2 with coupons and weekly quotas.. yet. 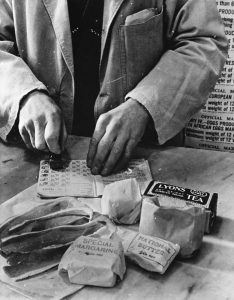 We’re in a perfect storm on food supplies. The problems caused by the pandemic were not immediately as bad as I feared. In fact it was impressive how well the UK supermarkets and distribution systems coped. The cost inflation following the end of the pandemic was, I suppose, predictable although I can’t recall anyone actually doing so.

Just as we’re climbing out of the lockdowns, the Ukraine war happens. Oil and energy prices skyrocketing as exports of grains and cooking oils is cut off. Farmers find the cost of fertiliser has gone up fivefold. Although the arable farmers are getting higher prices for their produce, they aren’t getting enough to compensate for the increased input costs. They react by growing less.

It gets worse though. The poultry farmers have been hit by increases in feed prices. Remember, ‘free-range’ poultry require feeding just as much as caged or barn birds. They’ve also been hit by avian flu restrictions, forcing them to keep the birds undercover. That’s another cost although it seems the restrictions come in every winter nowadays.

They’re losing money on every bird and many don’t know if it is worth carrying on. Some are just taking a break and not replacing livestock as usual. This hits the farmers who supply fertile eggs to hatcheries, the hatcheries and those who specialise in raising birds from day-old to point of lay.

There are similar problems with other livestock and we’re in a silly situation. High and consistent demand being unfulfilled because the farmers can’t get paid enough to cover their costs. Who wants to pay to go to work?

Another problem is that farming is a business with long lead times. Whether growing crops or raising livestock takes time. It’s not like turning a switch in a factory, recovering production levels could take two or three years

The price increases we’re seeing now are just the start. Price rises in the pipeline are going to hit the poorest hardest and, if things carry on as they are, real shortages are inevitable. The best estimate is that the Ukrainian wheat exports will be half that of last year.

Madman not a Fool.

The madman in the Kremlin is not a total fool. He knows the west won’t risk the final war over Ukraine. He’s also calculated correctly that the Germans won’t switch off the gas so he’s got billions coming into his war chest.

His latest act is to steal hundreds of thousands of tonnes of Ukrainian wheat. See Reuters. I think he’s preparing to hold another threat over the world. Obey me or starve – not a new tactic for the Russians. They did precisely this in the Holodomor of the 1930s

The only fair answer to food shortages when they get really bad is price controls and rationing. The British government discovered this towards the end of First World War when a few food riots raised the spectre of Bolshevik revolution as had happened in Russia. At least everyone was equal with rationing.

Even in the Second World War and after when we had rationing in Britain, not everything was rationed. Some food gluts were available in season although you had to queue for them and prices were not universally controlled – so could be expensive.

Those who grew their own supplemented the ration and ensured their supply of fresh vegetables without queuing for hours.

I think we’re going to have to rediscover some wartime virtues. Waste nothing, be inventive and plan meals according to what we have available. And grow as much as you can for yourself, your family and friends. Dig for Victory!

7 comments on “Rationing May Come Again”