Back Gone Again but Keeping On

My back has gone again which is incredibly frustrating. Hard to explain but it’s different to last time in that the pain is in on the right hand side now. Some relief from the osteopath but it’s not a quick fix.

Son in law, Gary is popping over to help but I find I’m positively jealous when he’s doing jobs that I normally would. Oh well, what can’t be cured must be endured. It’s a matter of priorities at this time of year. There is, as always, a lot to be done. Some must be done now for this season and some for the longer term.

We’ve a large amount of sheep manure in a pile at one side of the holding and the woodchips in the field at the other. Whilst both will ‘mature’ left to themselves, I want to produce some good compost by mixing them. The manure is high in nitrogen and the woodchips in carbon so a perfect marriage.

The trick now is to look for the most efficient way to combine them – or at least a goodly portion. In the meantime, we’re using some chips to create new paths between the recycled plastic beds and the old wooden raised beds as well as mulching under the fruit bushes and trees. The chips will rot down over time and turn into a lovely carbon-rich material helping mycorrhizal fungi to do their bit in the soil. 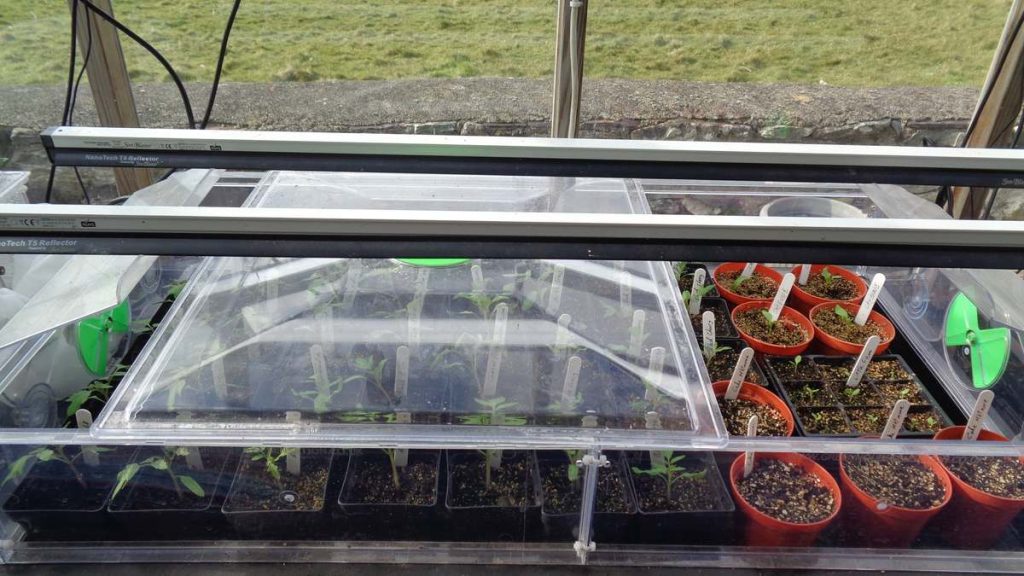 Mainly tomato seedlings under lights in the Vitopod.

Mainly I’m spending time in the potting shed. At least I’m able to carry a seed tray although I did have to ask Gary to move a bag of multi-purpose compost for me. Moving it from the other end of the shed was just too tough.

I tend to mix vermiculite in with the compost for sowing and happily vermiculite is so light that carrying it is not a problem. Rather than putting compost over shallow sown seeds like brassicas, I just cover with fine vermiculite. It holds the seeds well and they burst through without difficulty.

One of the Vitopod propagators is near full with tomatoes and a few chilli peppers. I thought the chilli peppers had failed but then up popped four seedlings. They’re getting some supplementary lighting in the morning and evening to power growth and avoid them getting leggy. Actually just one chilli plant will be enough for us. The other Vitopod hasn’t got the lights on yet as the seeds within have yet to show.

March may have been exceptionally sunny and warm for a while but it finished with cold spell. Oh for average weather! I’ve got some outdoor sowings in, onion sets and broad beans but they’ll be OK. The early potatoes have yet to show so they shouldn’t be bothered by this cold snap.

2 comments on “Back Gone Again but Keeping On”