Last year I went a bit OTT with my potatoes. We did too well really. I gave away the harvested surplus so no harm done. This year I’m being a bit more restrained, but not a lot.

It’s always difficult ordering seeds and seed potatoes. So many wonderful varieties to choose from. Honestly, I found about 50 types I fancied trying. Like a child in a sweet shop.. I’d like them all! There’s an article on choosing seed potatoes here to help you along with articles on what varieties are best for which culinary use (best for mash, best for chips etc.) See How to Grow Potatoes

My actual seed potato selection for 2022 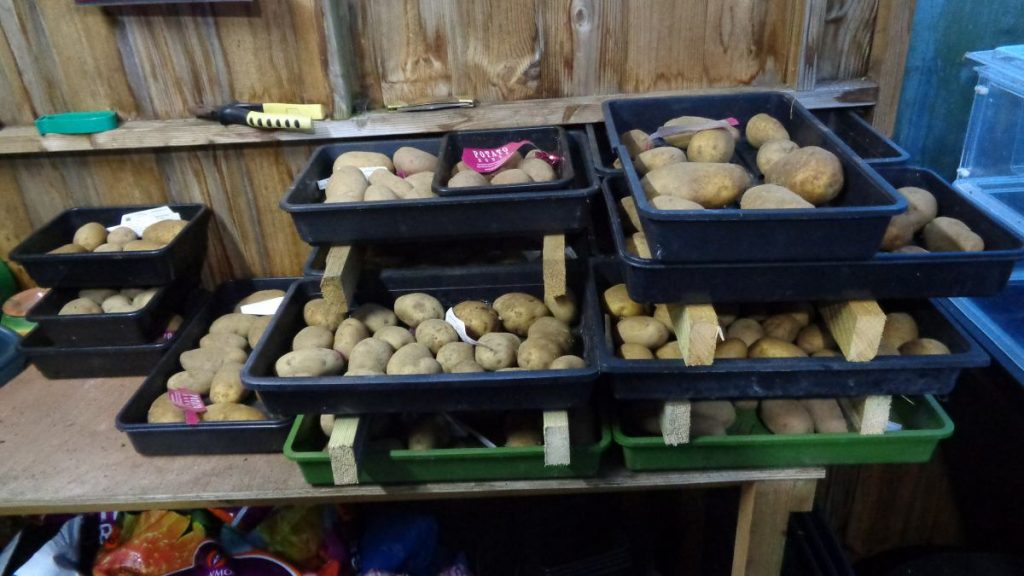 Potatoes Chitting in seed trays in the potting shed. from 2021 I use the labels from the nets in the seed trays to avoid mix-ups at planting time.

Casablanca is a productive, multi-purpose, recently developed (2009) variety. It’s new to me so I’m hoping it lives up to its listings. Normally my 1st early banker is Arran Pilot. It’s been around for 90 years. Not hugely productive, but over the years Arran Pilot has proven reliable for me. Casablanca is supposed to give twice the yield, so hopeful this is a good move.

Colleen is another modern variety, not even 30 yet. A pal reckoned this was a lovely spud which is why it’s on my list. Supposedly yield is near to that of Casablanca so it will probably come down flavour which makes next year’s list.

Charlotte is the salad potato. Waxy texture as you’d expect with great flavour. One of my ‘bankers’ Reliable enough to bank on. Can be harvested small but the last plants left produce some very large tubers.

Orla is a strange one. Some describe it as a first early, others as an early main. I like that you can harvest as an early or just leave it to bulk up until blight starts and then harvest. It’s a great all-rounder – mashes and chips.

Kifli is a member of the Sarpo family which gives great blight resistance. It’s is a lovely, waxy salad potato with a similar flavour to Charlotte. Kifli is an early maincrop and can be on the table as early as August. My plan is that the Kifli will follow on the Charlotte and hopefully store until and beyond Christmas 2022.

Setanta is a good all-rounder and quite blight resistant. Whether it is as blight resistant as Sarpo will depend on what strains are around next year. Even potato blight has its variants! I’ll try growing a kilo and see how they do against Axona.

Scapa is a new to me variety, a cross between Mayan Twilight and Mayan Gold. Reputed to be great for boiling, baking and mashing with a deep yellow flesh. Near top for scab resistance which is a problem here it also has reasonable blight resistance.

I read on Orkney.com that it was developed by James Thorburn in South Ronaldsay, one of the Orkney Islands. The main force behind breeding Scapa was flavour so I’m really looking forward to seeing how we do with this.

We did really well with Sarpo Axona this year and generally we prefer the flavour / texture to that of Sarpo Mira. It stores well too so I’m confident we will be eating our Axona until next year’s earlies are available. 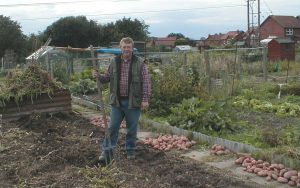 Sarpo Mira is the bruiser of the family. Mira laughs at blight most years whilst it’s swamping the weeds. It’s very, I mean very, productive and often produces exceptionally large tubers. That can be a problem though. If you let them carry on too long or don’t give them enough water in a dry spell which is followed by rain they have a tendency to hollow heart.

I’ve been growing Sarpo Mira for 16 years now and it never fails to produce a crop, even in a bad blight year.

The flavour is good but they’ve a very dense flesh which doesn’t fit to everyone’s taste. Fantastic for oven dishes like leek and potato pie or Boulangère as, being firm, they hold their shape well when cooked. I love them mashed as well – I really don’t like watery mashed potatoes and the dense texture of Mira is perfect.