To be honest, things have not started that well this season. The Eden greenhouse door is still off and I’m awaiting spare parts to get it repaired and re-hung. Thank you Storm Eunice. My back is playing up again which is frustrating. Just moving a bag of sand is risking a day of a painkillers. Luckily Gary pops over to help so the heavy jobs are getting done.

Looking on the bright side, seeds are getting sown and the early potatoes have been planted in the polytunnel. 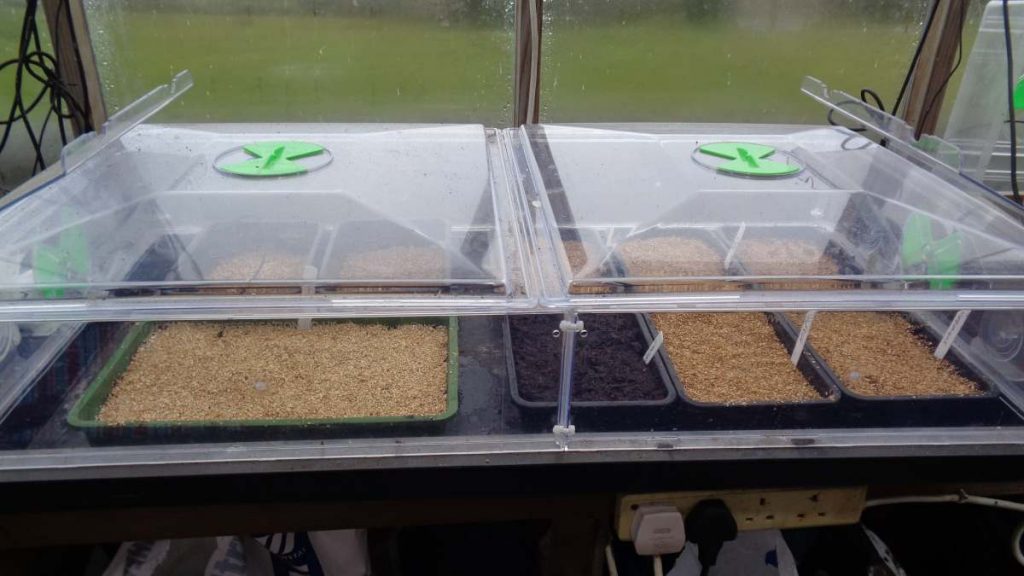 The large raised bed in the polytunnel border is 120 cm x 120 cm. It’s filled with multi-purpose compost which has had a few good handfuls of potato fertiliser mixed in. Planted 16 seed tubers in a grid, 15 cm from the edges and 30 cm apart each way. That’s a bit more densely planted than usual but considering the quality of the growing medium and the benefits of growing in the polytunnel, it works well.

This is part of the excitement of growing for me. Will things work as advertised? You never can tell. General descriptions are helpful but much hangs on the individual conditions the crop is grown in.

Despite being in the shelter of the polytunnel, the weather has turned quite cold. So tonight, after checking the hens were safely at roost in the coop, I covered the bed with horticultural fleece to keep the frost off. One of the plants is showing already, the rest won’t be far behind.

In the potting shed I’ve sown some Cauliflower Snowball, Cabbage Greyhound and Calabrese Zen. These have all gone in to half seed trays to be pricked out into pots when ready. They’ll go into the coldframe to harden off before planting.

In the same propagator I’ve a full seed tray of Ailsa Craig onions. I might sow another as well. One of the top crops, onions.

Finally, I had some four years out-dated Hispi cabbage seeds left from a book promotion some years back. I’ve literally sowed 6 packets in a half seed tray. If, as I expect, none germinate then I’ve lost nothing but if they all come up then the chickens get some micro-greens.

On micro-greens, sown two packets of beetroot into a half tray. The packets had mouse damage but may well be OK. Another hen treat. I know micro-greens are very fashionable but not for me, thank you.

My new e-books are now available and going well. I’ve had a few people asking if I could produce physical copies of them but the economics really don’t work. For example, with Potatoes – A Guide to Growing, Harvesting, and Storing Potatoes I’d need to treble the price from £2.95! I can’t please everyone, but I try.

The other night I went out at dusk to the hens and a pair of rabbits bolted down the drive as I stepped out. Oh dear, they’re becoming a problem. One has even started digging in the walled veg garden!

There was a time our rodent control operatives would have been out half the night, reducing the problem. Now I’m afraid they’re getting old. Sleeping and eating are an exhausting day’s work for the moggies.