I really like our Hotbin Composter, it sits quietly behind the house converting waste to healthy, plantfood. Some green waste goes in which would compost in any system but where the benefits really come are perennial weeds and kitchen waste. 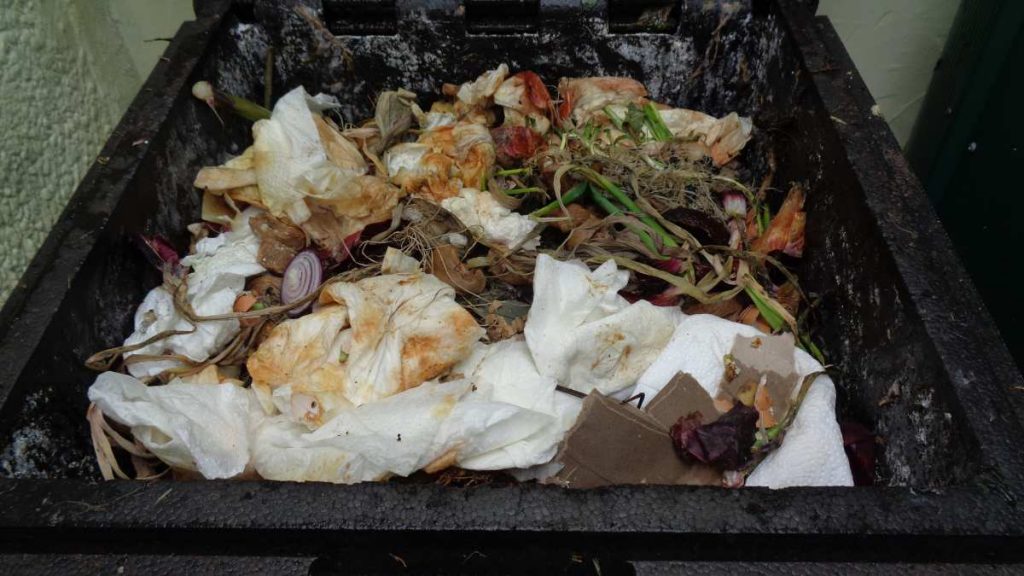 Kitchen waste etc. in the top of the Hotbin composter.

Perennial weeds have a nasty habit of re-growing in a cool composting system but the Hotbin cook-kills them so not a problem. I generally feed dandelion leaves to the hens and compost the roots. Seeding weeds can be a problem if the seeds survive the composting process. The hot composting process effectively solves that problem.

Standard advice with composting is not to add meat waste and bones because they attract vermin, flies and smell horribly as they rot. With our retired rodent control operatives, we often end up with uneaten cat food which, being organic, goes into the Hotbin along with any small bones from chops etc.

Despite being retired, they do like to keep their hand in so the occasional dead mouse and the now very rare half a rabbit will go into the bin. With something like a half-rabbit or a mouse, I ensure they’re covered by other materials. The Hotbin becomes a hot grave!

I always ensure any meat is well balanced with ‘browns’ to provide extra carbon. Meat is high in nitrogen – a super green. Bits of cardboard, shredded paper and kitchen roll along with bark chippings which help to keep the compost open and allow air penetration go in.

There’s quite a lot of kitchen roll in the photograph. The reason is that one of the cats ate a large meal and then, due to a hairball, decided to throw up. The joy of pets. The kitchen roll etc. will be gone in a week or so. 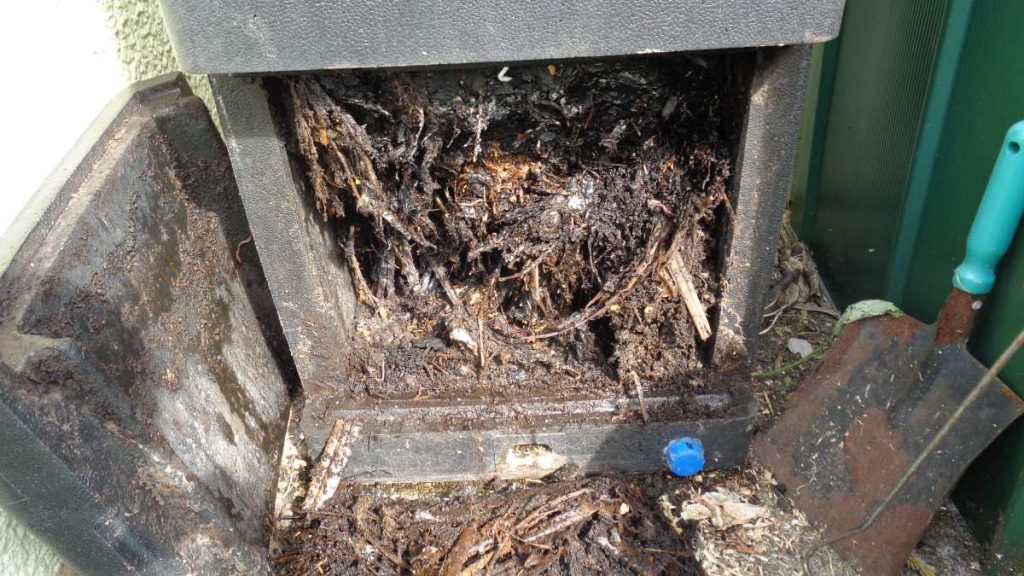 Removing compost from the base of the Hotbin. This is actually a little wetter than usual and could have been better for another week. It’s full of worms too, which is good.

I can only think of a couple of times where there has been any offensive smell when the bin is opened. A quick stir and some extra materials solved that.

Generally we don’t have a litter tray – the cats use the great outdoors. When we do have to use one because a cat is kept in due to illness, we use biodegradable wood material. This goes into the bin and is effectively made safe as it turns into compost.

The Hotbin is not supposed to need mixing but sometimes it slows down and doesn’t heat properly. Usually this is a sign that it needs the compost emptying from the base – as it does at the moment. There is a quick way to get it back up to temperature if I don’t have half an hour to empty it. I use an auger with a cordless drill to mix and create some top to bottom tunnels. 99% of the time it heats back up within a day.

If that fails to work and the finished compost has been emptied, generally it’s a matter of re-balancing. Most often it’s a lack of carbon rich materials rather than nitrogen rich.  Adding some bark chippings or shredded paper, cardboard sorts that. You quickly get a feel for what’s needed.

The only organic material that doesn’t seem to compost well for me is eggshell. We do eat a lot of eggs and often bits of shell are recognisable in the finished compost. They do no harm and they vanish after a month or two in the ground.

I hate waste, it offends me. Sending things off to the recycling is preferable to landfill but the ideal is re-use or, with food waste etc., to process it myself gaining a useful benefit for the garden. 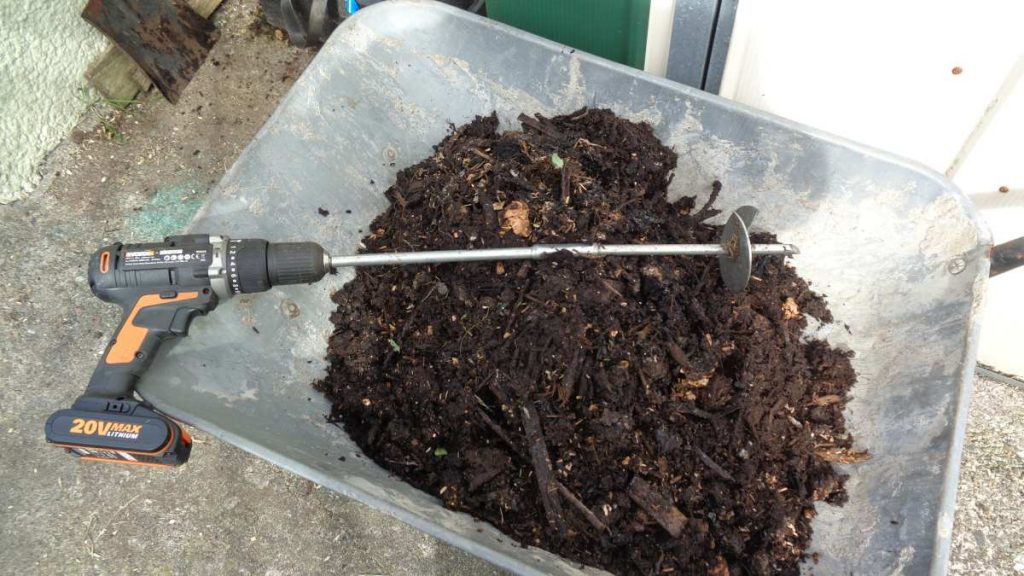 Some finished compost in the wheelbarrow along with my auger fitted in the cordless drill.