Having had a hotbin composter for a while now, I’m convinced it is something that every house should have – efficiently converting most kitchen waste as well as green garden waste into excellent compost. It takes no more room than a fridge and doesn’t give off smells or attract rats etc. 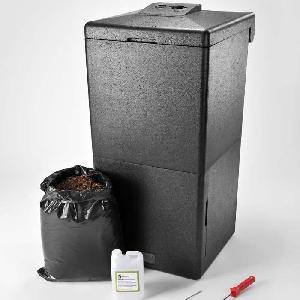 The HotBin Composting kit. Converts both green and kitchen waste into nutrient rich compost without smells or flies.
Available from Harrod Horticulture

In large part this is due to normal composting being slow and cool rather than fast and hot. Here’s a compost bin that keeps the contents hot, which promotes fast conversion from smelly waste to rich garden compost.

Our local council has recently started collecting food waste which eventually goes into a bio-digester and comes out the other end as compost. Considering the cost of collecting this separated from other waste and transporting it, I’m not 100% convinced of the ‘greenness’ of the concept.

The idea of the Hotbin is that any household with a small outside area can dispose of both green waste and food/kitchen waste without creating smells and a health problem.

The bin itself is made of polystyrene like insulating material, holding the heat generated by decomposition in whilst preventing any vermin from getting into the bin. In the base is a small air inlet covered with a metal grill and in the lid a controllable vent so you can create and control a through draft.

Also in the lid there is a thermometer that registers the temperature under the lid visible from the outside with the lid shut. The bin comes with an extra compost thermometer for accurate measurement of the material’s temperature.

Once it gets going, the temperature in the bin quickly rises to between 40 and 60 degrees C. You find yourself looking every time you go past. Opening the lid (you can’t resist that either) and quite a blast of heat hits you. The materials inside look as if they’ve been in a normal compost heap for 10 times longer than they actually have.

My experience is that it can be a little tricky getting used to hot composting in the bin. Because green materials can be 70% water and food waste (mainly teabags with us) has an even higher water content, the compost easily gets too wet and decomposition slows and heat falls.

Adding shredded paper, torn up bits of cardboard or shredded bark etc. soaks up the excess water and balances the carbon / nitrogen ratio. Think of a fire. You need wood or other inflammable material (carbon) to burn but also oxygen. Too little of either and the fire goes out plus water puts out fire.

Because of the heat the heap reaches you don’t need to worry about flies, any eggs laid are killed so no maggots and meat scraps, small bones etc. just vanish into the compost.

The other big benefit with a guaranteed hot compost is no problems with weed seeds or perennial weed roots re-growing. There’s nothing worse than spreading a compost which results in masses of dandelions coming up.

This is not a cheap product but it does all that’s claimed of it. The system means that you can have it near to the house without being concerned and all your kitchen and garden green waste will recycle effectively and quickly,

Considering the cost of kitchen waste collection systems to local councils, I reckon they could save a lot of money by subsidising this bin instead of the cheaper basic plastic composters many of them do supply.

For more information on the HotBin Composter, usage instructions etc. and to purchase go to Harrod Horticulture