Back in the summer, I started hearing about a weedkiller that was effective against horsetail from Neudorff. Horsetail is a really difficult weed to control either chemically or mechanically. So I obtained some to try out. Happily for me, I don’t have horsetail here but we have plenty of other perennial weeds to try it on. 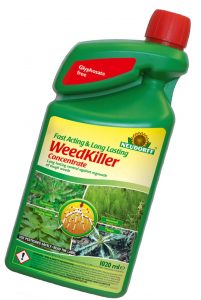 Like a lot of gardeners out there, time is something we’re short of. I’d love to be able to control all our weeds by cultivation but I simply don’t. For example, picking the weeds out of a gravel path by hand is just too time consuming.

An Alternative to Glyphosate

People have been asking for an alternative to glyphosate after all the publicity and it being labelled as possibly cancer causing. My old fashioned and proven weedkiller, ammonium sulphamate, was delisted as a herbicide – basically because the producers found the licensing process too expensive.

Putting aside the safety or otherwise of glyphosate, it is a very effective and inexpensive weedkiller. Spray the weeds and usually they’re dead to the root, even perennials, although horsetail can take more than one application to finish it off. In fact, even using ammonium sulphamate and later glyphosate I still had horestail popping up in places after 3 years of spraying and hoeing the devil weed.

Neudorff’s Fast Acting and Long Lasting Weedkiller is, I have to say, not as effective as glyphosate but it does work well if you use it as advised. The weeds have to be small, under 10 cm, and dry. The plant has to be sprayed thoroughly, if you only get half it recovers quite quickly.

The results of spraying are visible very quickly. Within a few hours the leaves are blackened and drooping. Larger plants are damaged by spraying but tend to recover. Some large docks and nettles were back to normal after a couple of weeks.

It’s a two part action. The first part is Pelargonic acid, a long chain fatty acid which also occurs in nature, specifically in geraniums. This penetrates the waxy layer of the leaf and destroys the outer cell walls so causing the top layer of cells to release moisture The treated parts dry up quickly whilst the other component, maleic hydrazide, translocates to the roots.

Maleic hydrazide has been used as a herbicide and to suppress sprouting in stored crops like potatoes since the 1950s. It’s considered safe but you pays your money and you takes your choice. I’m not qualified to interpret the various scientific papers on maleic hydrazide but I’m as certain as you can be it’s safe.

Nudorff are a 150 year old German company that produces organic and sustainable garden products. They’ve been in the UK since 2012. They have a very strong green ethos, sponsoring various organisations and causes.

Neudorff’s Fast Acting and Long Lasting Weedkiller comes in a ready to use formulation and a concentrated formulation. It is available in garden centres and online