When I said I wanted a lawnmower and ran over what sort of workload the poor thing would be in for, my pal Gwiz from the Allotment Forum straight away suggested the Al-Ko self-propelled petrol range. Thanks! 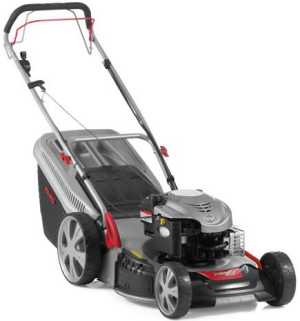 It arrived promptly but, as with everything nowadays, required some assembly and, of course, fuel and oil.

Now I didn’t inherit a mechanical gene – engine manuals might as well be written in ancient Sanskrit for all the sense they make to me.

Luckily, my neighbour up the hill has the mechanical gene and trekked downhill to help me.

Together we had it assembled, oiled and fuelled in no time. I passed him the bits and he did it, to be honest.

There are just three controls; a throttle for the engine speed, a bar that makes the wheels turn and a deadman bar that stops the engine if released. It’s not too heavy to push with the power switched off to the wheels on the flat but I wouldn’t like to push it by hand up the slope of the hill.

The Briggs & Stratton 1200 engine is a joy to start. Take up the slack, pull the cord and it starts. No messing and not even a hard pull. No choke to mess around with either. Just occasionally, for no reason I can fathom, after mowing for a while it just won’t start. Just letting it sit for 5 minutes seems to do the trick and it runs as normal again.

Because you can’t do anything like empty the grass box or adjust the height of cut without releasing the deadman switch and stopping the engine, easy starting is critical. If it took 3 or 4 pulls you’d get pretty fed up pretty quickly

The engine speed (throttle) needs to be full on for very tall grass but for shorter grass you can save fuel by running it slower. I’ve found with really tall grass, almost meadow, that you can choke the machine causing it to stop, especially if using some power to drive the wheels.

The balance is just right so that, without the grass box on, you can tilt the front of the machine up and do a very high cut following up with a normal cut. For tall grass it’s best used with the side discharge attachment, it allows the grass to exit the body of the machine fastest and avoids choking it up.

It’s a bit tricky to fit the side discharge unit and if you don’t get it right it will come off but once you’ve got the knack it’s no problem.

The height adjuster is a doddle – one large lever alters it from 75mm cut down to 25mm cut.  I need a high cut as there are lots of stones on the field surface and I don’t want to damage the blades but it will also do a fine lawn.

I started by running over the path to the gate with the grass collector on. Went over it on the high cut and then again on a lower cut. It looks a lot better now! The bit at the end was done manually and it really was no more to push than my little electric flymo – except I didn’t have to keep avoiding the cable.

The ability to mow with the machine under manual control is actually very useful. On the side lawn we’ve got a number of young trees planted and you need good control to manoeuvre around them.

Next it was the sloping field around the veg plots. Now I must admit, looking at the job to do, I wondered if I should have a tractor with mower. However the Al-ko did a great job and I got more exercise walking behind it than I would have driving a lawn tractor.. if not quite so much fun.

I took the grass box off for the overgrown field and fitted the side-discharge guide. It finds it easier to throw the grass out of the side when it’s long than the rear discharge. It did make the machine a bit wide for the paths between the raised beds though so they was done on rear discharge. There is a mulch plug as well but I’ve not tried that yet.

Overall, not the cheapest lawn mower you could buy but I think it’s excellent value for money. Whether you’re like me with a field to mow as well as a lawn or if you’ve a half acre bowling green then this machine with its wide 52cm will do the job effectively for you. They do smaller models as well. The Al-Ko mowers are not cheap, but they’re really well designed and built to last.

The Al-ko range of mowers are generally available in the UK.