When I’m using fertiliser outside it’s supplementing the nutrients already in the soil. Usually with the amount of manure and compost I’ve applied, the soil has sufficient micro-nutrients and trace elements to supply the crops’ needs. So often the only real benefit is in supplementing the big three major nutrients, Nitrogen, Phosphorus and Potash or Potassium – NPK. 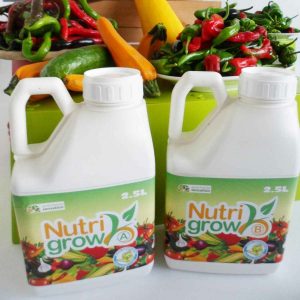 With crops in pots and hanging baskets there’s no reservoir of micro-nutrients and trace elements. The basic cheap liquid feeds tend to be NPK with perhaps some magnesium in the case of a tomato feed but nothing much else. Award winning Nutrigrow plant food, however, is far more than just a basic fertiliser.

Because it is super concentrated it comes in two packs (A & B) which are mixed individually with 2.5 litres of warm water to dissolve them. To use, 6 ml of each of the resulting concentrates is mixed with each litre of water. For young plants and those not requiring too much fertiliser, the rate is halved. So one pack of Nutrigrow will make 416 litres of feed at the normal dilution rate! See video below.

The reason it is made in two halves is that it is so concentrated that mixing the concentrates together would cause adverse chemical reactions and reduce it’s effectiveness. You can make up the diluted mix to use and store in the watering can for later use though.

A & B Packs Composition

The A pack has nitrogen and potash, 12-0-12 plus calcium. Calcium is critical in tomatoes for preventing blossom end rot and useful to all plants. The B pack has nitrogen, phosphorus and potash, 6-9-25 plus magnesium to prevent or cure lock-up problems and the following trace elements:

I’ve been using Nutrigrow for three years now and I’m very pleased with the results. I suppose I should run a proper comparison trial but the fact is that Nutrigrow has given me great results so why bother? All it would do, I’m sure, is confirm what I already know from experience anyway.

This year I’m expanding the range of plants I’m using it on from just the tomatoes. I’ll be using it on peppers, chilli peppers, aubergines, cucumbers and gherkins and strawberries.

Nutrigrow and Nutrigrow refill packs are available from Greenhouse Sensations