These are elements that are vital to plant growth but are only required in minute amounts, very much like vitamins in human diets. They are known as micro-nutrients because of the tiny amounts found in normal soils. 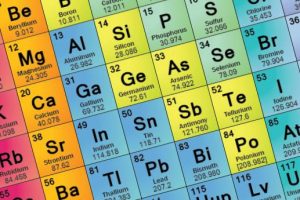 Luckily for us, most of these deficiencies are very rare and rotation, use of compost and manures will cure them.

Boron is necessary for calcium to perform its functions in the plant but too much boron is also harmful to the plant. Excess use of magnesium sulphate will also cause a boron imbalance. The symptoms of boron deficiency are poor development of the growing tip of the plant. It is more likely in soils with pH above 6.5.

Confirming boron deficiency is a job for laboratory analysis but some indicators are:

Adding borax to the soil will correct the deficiency but borax is also a herbicide. For garden growers who are unlikely to want to pay for professional testing and recommendations the best advice is to avoid over use of magnesium sulphate, rotate and use plenty of home made compost.

Copper deficiency is rare but can occur on sandy, peaty and chalky soils with their high pH levels. It is required for root formation. Once again it requires professional analysis to confirm and to determine a proper course of action to rectify. Usually the single use of a copper sulphate based fungicide (Bordeaux mixture) will re-stock the soil for as long as you are likely to grow on it.

Excess copper is very toxic to plants and to people. In plants it causes reduced growth, yellowing of the foliage, and stunted root development

Iron is needed for chlorophyll production, which is what the green colour in leaves is. Iron deficiency causes yellowing of the leaves and a general lack of vigour. It is fortunately rare but unfortunately hard to both diagnose or determine by laboratory analysis.

Generally not something the home grower needs to concern himself with but should you suspect you have it then use sulphate of iron fertilizer on a test patch.

Do keep in mind that too much iron is more of a problem as it locks up the potassium and phosphorus in the soil making it unavailable to the plants.

Manganese deficiency is often caused by over liming and is most often found on peaty and sandy soils with a high pH. Symptoms are similar to iron deficiency and can be confirmed by laboratory analysis of the leaf. Susceptible crops include peas and beets.

Adding sulphur to the soil, which will increase the acidity (decreasing pH) will solve the problem.

The following micro-nutrients are rarely lacking and analysis and remedy are professional jobs. Normal additions of composts and manures will resolve deficiency problems. Excess in the soil will probably be due to industrial contamination.

Molybdenum’s function is to enable the fixation of nitrogen in legumes and its utilisation in other plants. Symptoms are similar to nitrogen deficiency with the addition that leaf edges may die.

Molybdenum deficiency is related to soil acidity and raising the soil pH to above 5.5 should resolve the problem

Zinc deficiency is more likely in soils with high pH than low. Crops most sensitive are tomatoes, onions and beans. The effect of zinc deficiency is to hinder the plant’s production of chlorophyll. Leaves will show a yellowing whilst the leaf veins remain green.

It is very similar to the effects of viral infections or lack of nitrogen – both of those are far more likely to be the cause of the problem.