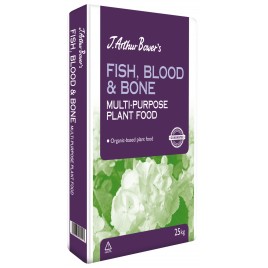 These fertilisers generally contain the same basic elements as inorganic fertilisers but are not made with high energy industrial processes. Most are by-products of the meat processing industry.

Because of the source, some vegetarians have ethical concerns about using organic fertilisers and manures preferring to use inorganic fertilisers. Because of concerns regarding BSE, there are restrictions on the use of blood meal and bonemeal for organic growers as well.

Finding some of these products has become increasingly difficult because of these concerns but a good garden sundry supplier should be able to help.

This is the organic version of Growmore with similar N-P-K levels. Fish, blood & bone runs at 6-6-6 whereas Growmore is 7-7-7. Cost is around 15% more than Growmore but the nitrogen release seems to be slower which can be helpful and reduce the overall amount of fertiliser used.

Dried blood is a straight fertiliser being 12% nitrogen. It is easily soluble and as fast acting as inorganic fertilisers although it is between 4 and 5 times the price for nitrogen delivered as its inorganic cousins such as Sulphate of Ammonia or Urea.

Hoof & horn is a straight fertiliser, like dried blood it is 12% to 14% nitrogen but it is slow acting. The benefit of this is that you can use it as a base dressing for crops like brassicas and it will gradually release its nitrogen payload over the season rather than in one go and then be leached by rain etc. Cost is slightly less than dried blood.

Bonemeal provides a small amount of nitrogen, 3.5%, and is an excellent source of slow release phosphorus, 18%, as well as containing calcium. It is often used as a base dressing when planting trees and bushes as phosphorus is used by plants to promote strong and healthy root growth The slow release aspect means the plant is well supplied for the crucial first year as it establishes.

Widely available these usually have an N-P-K of 4-2.5-2.3 or thereabouts. Additionally they contain organic matter and trace elements, making them an excellent choice for top dressing.

This product is more of a tonic and conditioner than a fertilizer used to provide minerals and trace elements. Seaweed extracts like SM3 are used as a foliar feed and are claimed to increase yield, disease resistance etc.

This product is mineralised cold water coral taken from the seabed. It is comprised of approximately 50% calcium with 10% magnesium carbonate and many trace elements. It is used directly on the soil to increase microbial activity whilst increasing pH slightly. (See Kelp or Seaweed Meal)