Written by a respected academic Sarvesh Shah and aimed at improving agricultural production in marginal lands, this article is both interesting and of value to the gardener. 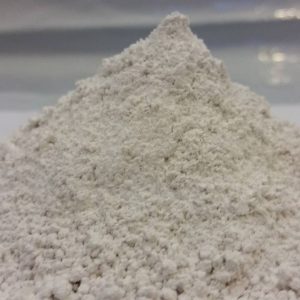 Improving land by the addition of a cheap mineral will provide long term benefits at low cost.

This requires the use of all resources judiciously. In India, the mineral gypsum is mostly used in the manufacture of cement, fertiliser, plaster of Paris, ceramics and distemper. Smaller quantity is used as soil conditioner, for carving and statuary purposes. India has huge resources of natural gypsum of the order of 1120 million tonnes, of which recoverable reserves are estimated at 237 million tonnes. Over 95 per cent of the natural gypsum come from Rajasthan.

Gypsum is chemically calcium sulfate dihydrate (CaSO4.2H2O). When dissolved in water, it yields calcium ions (Ca2+) and sulfate-sulfur ions (SO42-). Both of these ions are essential major nutrients for growing plants. In addition to this, calcium also plays a vital role in establishing and maintaining good chemical balance in soil, water and plants.

Gypsum is one of those rare materials that perform in all three categories of soil treatment: an amendment, conditioner, and fertilizer. The usage of gypsum in agriculture can be grouped into following heads:

Reclaims soil sodicity: The sodic soils have exchangeable sodium percentage (ESP) more than 15, it must be lowered for soil improvement as well as better crop growth. The calcium supplied by gypsum replaces the sodium held at the clay-exchange sites. The replaced sodium can be leached from the soil as sodium sulfate to an appropriate sink.

Decreases the toxic effect of NaCl salinity: Calcium from gypsum has a physiological role in inhibiting the uptake of sodium by plants. Thus plant are mitigate the sodium toxicity, which is more pronounced in the salt affected soils.

Decreases pH of sodic soils: The sodic soils are characterised by the high soil pH (>8.5). Gypsum lowers the high pH of sodic soils or near sodic soils to 7.5 to 7.8. These values are in the range of acceptability for growth of most crop plants. Increased calcium uptake by roots when gypsum is applied can decrease the pH of the rhizosphere.

EC = Electrical Conductivity which is used as a method of determining the water holding capacity of the soil.

Creates favourable soil EC: The more EC value of the soil is undesired for the crop growth. The high EC of soil are due to fertilizer application as well as by the weathering of soil minerals. Gypsum, being readily soluble, results in proper buffered solute concentration (EC) in soil to maintain soil in a flocculated state.

Makes excess Magnesium non-toxic: Calcium is essential to the biochemical mechanisms by which most plants nutrients are absorbed by roots. Without adequate calcium, uptake mechanisms would fail. In soils having unfavourable calcium magnesium ratios, such as serpentine soils, gypsum can create a more favourable ratio. Thus render Magnesium non-toxic.

Decreases heavy-metal toxicity: Calcium plays a role of regulator for balance of micro-nutrients, such as iron, zinc, manganese and copper, in plants. Calcium prevents excess uptake of many of them; and once they are in the plant, calcium keeps them from having adverse effects when their levels get high. Calcium in liberal quantities helps to maintain a healthy balance of nutrients and non-nutrients within plants. Gypsum also removes excess of Boron from sodic soil. It also regulates non-essential trace elements.

Prevents crusting of soil: Gypsum application can decrease and prevent the crust formation on soil surfaces which result from rain drops or from sprinkler irrigation on unstable soil. It can prevent crusting that result when acid soils are limed and the gypsum is coapplied with the lime. Improves compacted soil: Gypsum can break up compacted soil and decrease penetrometer resistance. Combination with organic amendments also helps, especially in preventing return of the compaction. The soils applied with gypsum have low bulk density.

Makes slightly wet soils easier to till: Soils that have been treated with gypsum have a wider range of soil moisture levels where it is safe to till without danger of compaction or deflocculation. Even a liberal application of gypsum is a good procedure for starting a piece of land into no-till soil management or pasture. Gypsum also improves the ability of soil to drain and not become waterlogged due to a combination of high sodium, swelling clay, and excess water.

Stops water runoff and erosion: Gypsum improves water infiltration rates into soils and also the hydraulic conductivity of the soil. The use of gypsum can decrease wind and water erosion of soil.

Improves swelling clays: Gypsum can decrease the swelling and cracking associated with high levels of exchangeable sodium on the montmorillonite-type clays. As sodium is replaced by calcium on these clays, they swell less and therefore do not easily clog the pore spaces through which air, water and roots move.

Increases water retention in soil: Gypsum when applied to sodic soil reduced the levels of exchangeable sodium resulted in increase in water retention. The improved soil structure help in the more retention of water. Increases the stability of soil organic matter: Gypsum is a source of calcium responsible for the binding of soil organic matter to clay and gives stability to soil aggregates.

Improves low-solute irrigation water: Gypsum is used to increase the solute concentration of low-solute water used for irrigation. Irrigation water from rivers that no longer have sources of leachable salts either penetrates poorly into soil or causes soil particles to degrade which results in low-water penetration. The problem can be corrected with surface-applied gypsum or application to the irrigation water.

Efficiently use low quality irrigation water: Use of reclaimed municipal wastewater is important for conservation of natural resources. Reclaimed water can be satisfactorily used if amended with gypsum and water-soluble polymers.

Improves fruit quality and prevents some plant diseases: The quality of fruit depends on the amount of calcium. Calcium is nearly always only marginally sufficient and often deficient in developing fruits. Calcium moves very slowly, if at all, from one plant part to another and fruits at the end of the transport system get too little. Calcium must be constantly available to the roots. In very high pH soils, calcium is not available enough; therefore, gypsum helps.

Gypsum is used for peanuts, which develop below ground, to keep them disease free. Gypsum helps prevent blossom-end rot of watermelon and tomatoes and bitter pit in apples. Gypsum is preferred over lime for potatoes grown in acid soils so that scab may be controlled.

Decreases loss of fertilizer nitrogen to the air: Calcium from gypsum can help decrease volatilisation loss of ammonium nitrogen from applications of ammonia, ammonium nitrate, urea, ammonium sulfate, or any of the ammonium phosphates.

Keeps clay off tuber and root crops: Gypsum can help keep clay particles from adhering to roots, bulbs and tubers of crops like potato, carrots, garlic and beets.

Helps Earthworms to Flourish: A continuous supply of calcium with organics is necessary for the habitat of earthworms that improve soil aeration, improve soil aggregation and churn the organic matter with inorganic fraction of soil.