Feed the Soil – Not the Plants

There’s a phrase that frequently appears on the web – “Feed the Soil – Not the Plants” It sounds really good. I mean, it’s obvious. Plants grow in soil and so feeding the soil that will feed the plants makes sense. It’s a bit new age green as well, which goes down well with the younger audiences.

To best answer those questions, it’s helpful to go back to square one of growing and look at what our plants need, keeping in mind our aim of growing great vegetables for our table.

What do plants need?

That really has to be the starting point when growing. The ideal soil for any plant will be:

Deep enough for the roots to develop freely 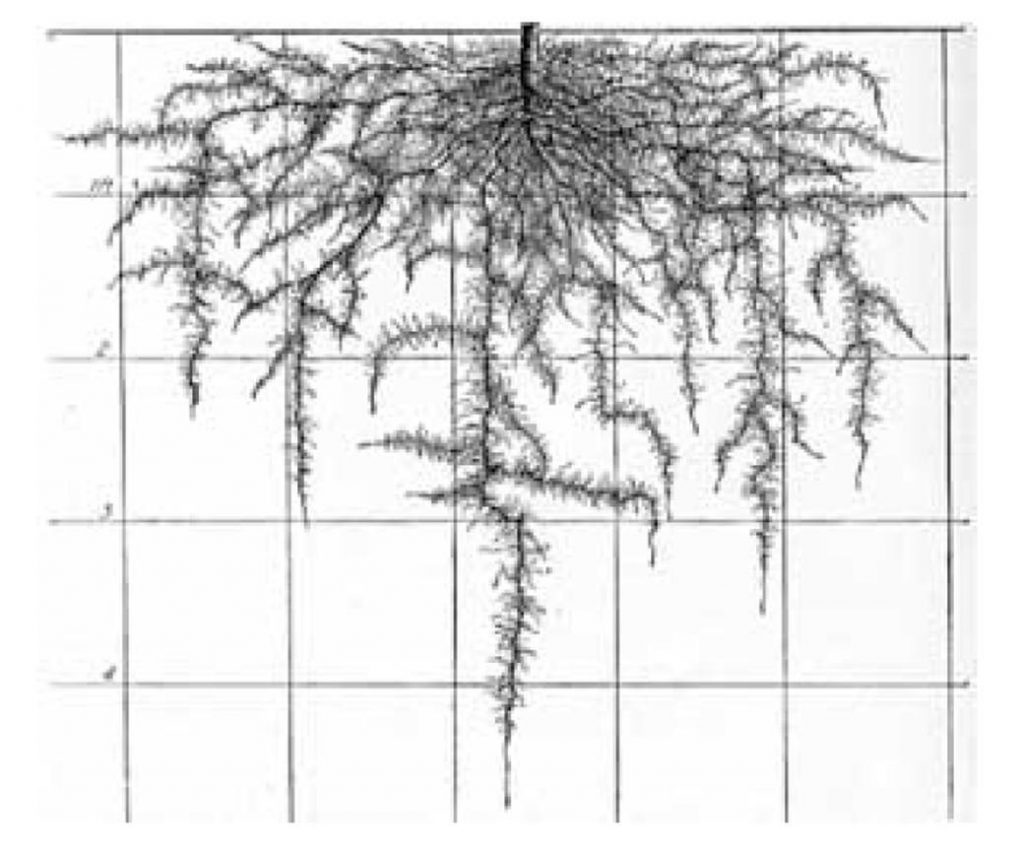 One-half of the root system of cauliflower at the time the plants were suitable for table use. From Root Development of Vegetable Crops 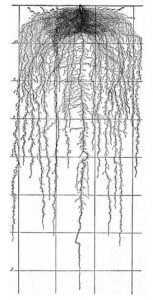 Back in 1927 Weaver & Bruner produced a masterwork – Root Development of Vegetable Crops. Their findings were surprising to say the least. Given the opportunity a mature lettuce will send its roots down over 2 metres – although the majority were in the first 25 cms. To quote:

Thus a volume of soil, with a surface area of over 9 square feet and a depth of at least 5 feet-nearly 50 cubic feet-was thoroughly ramified by the roots of a single plant

More surprising to me, a cauliflower’s roots don’t go down as far as a lettuce. The root system is mainly concentrated in the top 60 cm although the taproot can go down to 140 cm.

Friable so the roots can easily grow through it.

Roots naturally follow the easiest route to get where they want, be that horizontally or vertically. They find gaps and pores from as small as 0.2 mm to exploit by growing in.

Rain comes intermittently but the plant needs it consistently available to grow well. So the ideal soil will allow water to percolate down and contain enough organic matter (humus) to store that water when it’s not raining.

Roots do require air. Friable soil has enough gaps in it to allow air in and to allow water to drain so that the roots don’t drown. They don’t need a lot of air, but they do need some. That’s why plants in a waterlogged pot die.

Be at the pH the plant has evolved for

Some plants like blueberries hate lime and have evolved to grow in an acid soil. Most vegetables, however, grow best in a soil pH between 6.00 and 7.00 – 7.00 being neutral.

Has the nutrients the plant requires available.

The operative word here is ‘available‘. For a start, the pH of the soil affects nutrient availability. As a general rule, both the major nutrients (NPK) and micro-nutrients are most available between pH 6.00 to 7.00

There are also symbiotic relationships between plants and the microbes and fungi in the soil.

Legumes have nodules on their roots containing bacteria that fix nitrogen which is necessary for the plant’s growth. They may not supply all the nitrogen the plant needs but at worst they give it an advantage over non-leguminous plants.

The relationship of fungi and plants is another one of mutual benefit. The fungi make nutrients more available to the plant and in return the plant helps feed the fungi. These relationships have only recently, in gardening terms, been discovered and research continues.

To recap: the ideal soil is deep, friable, retains water but sheds excess water, has the right pH and high nutrient availability.

At this point it’s worth stepping back again and looking at what soil actually is.

The starting point is particles of rock. The size of the particles determines if it’s a clay (heavy) soil or light (sandy) soil. Only around half of soil is actually those particles. The rest of the volume comprises water and air spaces – the proportion of these varies according to how much rain there has been recently.

Finally a small portion is organic matter which typically ranges from as little as 1% to 5% but can be near 10% with help. It’s this organic matter that is so important and makes the difference between crushed rock and soil.

What is organic matter?

Organic matter is dead, decaying vegetation, micro-organisms and creatures that live in the soil along with humus. Humus technically is dead vegetable matter and micro-organisms converted by the action of the soil microbes into a dark material that gives topsoil its dark colour. It glues together small particles of rock helping a clay soil become more friable.

Unfortunately, humus is also food for microbes and so there is a continual process of creation and destruction of humus in the soil.

Now from the above, we’re getting to the meaning of ‘feed the soil’. Obviously you can’t feed rock, water or air. Nor can you feed dead vegetation. But you can feed the organisms that live in the soil, from bacteria to earthworms and everything in between.

The addition of compost (both vegetative and from rotted manures), partially composted matter and even freshly dead vegetation like grass clippings as a mulch will, with aid of the army of soil creatures, enable the creation of more humus. The earthworms will burrow around, improving the soil as they go and leaving tunnels behind to help with water absorption and drainage.

Gardeners, of course, want to grow plants not soil organisms. You don’t need to be a scientist to realise that the better the soil, the better it is for our plants but the aim is to grow great plants and improving the soil is only part of the story.

Vegetables have been bred for yield and, to perform well, they need enough available nutrients. Most likely all of the micro-nutrients needed will be available from good compost made from a mixture of materials. Where a shortage may arise is in the basic big 3 of Nitrogen, Phosphorus and Potassium (Potash)

For example, leafy brassicas need high levels of nitrogen and beans will often benefit from additional potassium. Providing enough nutrients from compost and manure is possible but it can be difficult to get the sheer volume required for intensively growing vegetables. That’s where fertiliser comes in.

In my opinion, all growers should put effort into improving their soil. But that doesn’t stop them from amending and adding to the soil to get the best crop they can. Mindlessly following the latest fad and repeating a mantra that sounds cool without any understanding is bound to fail.