This article is courtesy of Simon Drummond and originally appeared in the Smallholder and the Allotment and Leisure Gardener magazines in 1999. I can testify that for working stony soils they are superb tools, far superior to the traditional digging spade.

Right Tool for the Job? 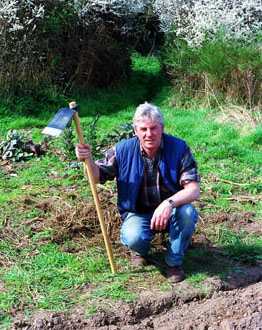 Well, as they say, Spring is here again. Many people by now will have been along to their local hardware store or garden centre eyeing up the rows of seductively gleaming tools. But how many people ask themselves whether that spade, fork, hoe or whatever is the most efficient tool for the job?

Why do we accept unquestioningly that the only way to work the soil is to spend our time bent double subjecting our bodies to the most appalling mistreatment and then complaining about our bad back and aching joints?

Could the reason possibly be that deeply ingrained in our subconscious we harbour the conviction that if it hurts it must be good for us and that a good Englishman’s back, like his upper lip should be properly stiff?

“So what’s all this rather heretical talk leading up to?”, I hear you asking. “Who is this upstart who dares to challenge the supremacy of the good old English spade? What would become of England without all those stalwart figures bent double, grunting and sweating as they do battle with the soil in allotments and smallholdings all over the country?” Well, in reply, let me pose another question: “Why do millions of people in countless countries all over the world do it so differently?”

From S. America to Europe, from Africa to China, the everyday tool they reach for is not the spade but a very different implement rather like a broad bladed mattock. Try one of these tools and you soon see why. Suddenly much of the effort disappears, the pushing, the jarring, the bending and lifting along with the dreaded backache.

On a little reflection the logic becomes apparent. The action of these tools radically differs from that of, say, a spade. Instead of physically ramming the blade into the ground, it enters under its own impetus using an easy swinging motion. Instead of the jarring of impact being transmitted up through wrists, elbows, shoulders etc., it is absorbed almost entirely by the tool. Finally, you find you are working from a much more upright position instead of lifting and straining while bent double and subjecting your back to such appalling strain.

I first became familiar with these tools when I lived in Spain and Portugal, involved in agriculture and soil surveying. I soon noticed that farmers used them for everything from cleaning between the grapes, digging irrigation ditches to planting a wide range of crops. They are also used in other sectors including construction. Use them for mixing cement and again – it’s so much easier. I call these tools by their Spanish name, Azadas, but obviously they have as many different names as there are places where they are used. I later spent several years in Venezuela and again saw farmers using Azadas.

My son recently returned after working on a wildlife project in Kenya, clearing tracks through the bush. He used the same tools – there they call them “jembes”. If you keep an eye open while watching TV, (it helps!), you’ll soon notice them cropping up in programmes about other countries – they’re used across the world but, amazingly, we don’t use them here.

Mattock on the Allotment

A couple of years ago I took on an allotment. My personal patch of jungle had not been touched for years and the first time I ventured onto it I wondered if I’d ever see my wife and family again! I’ve now cleared and dug about two thirds of it and am preparing for another season of charitable work in aid of the world’s hungry masses. I refer of course to the slugs, carrot flies, birds and countless other fellow creatures I never dreamt so desperately needed my help.

I have done practically everything with my trusty Azadas and can truthfully say that if I’d had to attempt it all with a spade, my little friends would by now be looking elsewhere for their free meal. I enjoy a bit of honest toil but there are limits and I also have to face the fact that I’m not as young as I once was.

As you’ve probably gathered by now, I’m a total convert to these marvellous tools, so much so that I’ve now started to import them and offer them here. If you’re interested, give me a call and I’ll let you have some literature and prices.

Simon Drummond supplies these tools from his web site – Get Digging – which is well worth a visit for more information.