The weather’s a bit like the curate’s egg – good in parts! Getting on with things when the weather permits, some of the highlights. 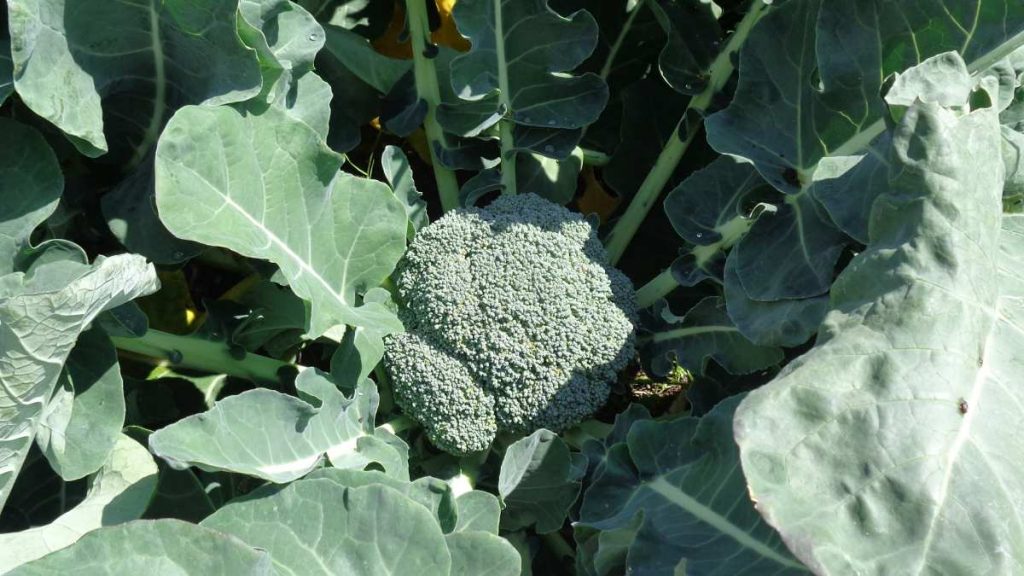 Calabrese – The Jewel in the Crown

I planted half a raised bed with calabrese. They were planted a little densely but it’s paid off. Any weeds were shaded out and the head size was good. A little problem with cabbage white caterpillars but I picked them off when I noticed them.

The heads were just about to go over so cut them all leaving the plants to throw up another flush of smaller heads, with a little luck. Calabrese is one of my favourite vegetables. Best fresh, of course, but very acceptable frozen. 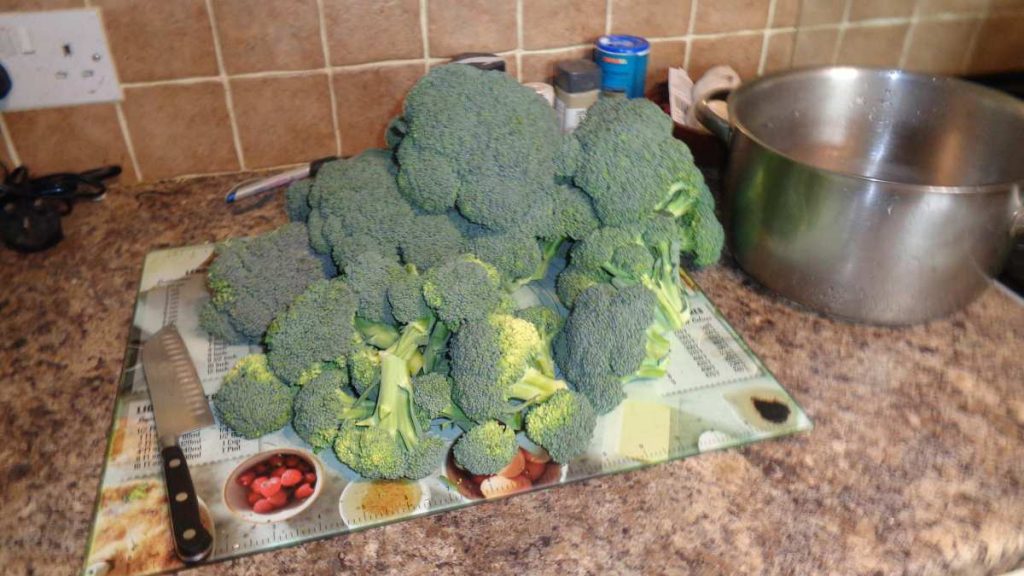 Blanching Calabrese Fresh is in the fridge

The sweetcorn in the polytunnel is looking fantastic. Rich green, healthy plants which are obviously loving the manure enriched soil in the bed. They’re about four feet tall already and tillering at the base.

The sweetcorn planted outside at the same time is basically a fail. Just three plants survive thanks to the slugs and snails. The later planted corn is better but only about eight inches tall at the moment. 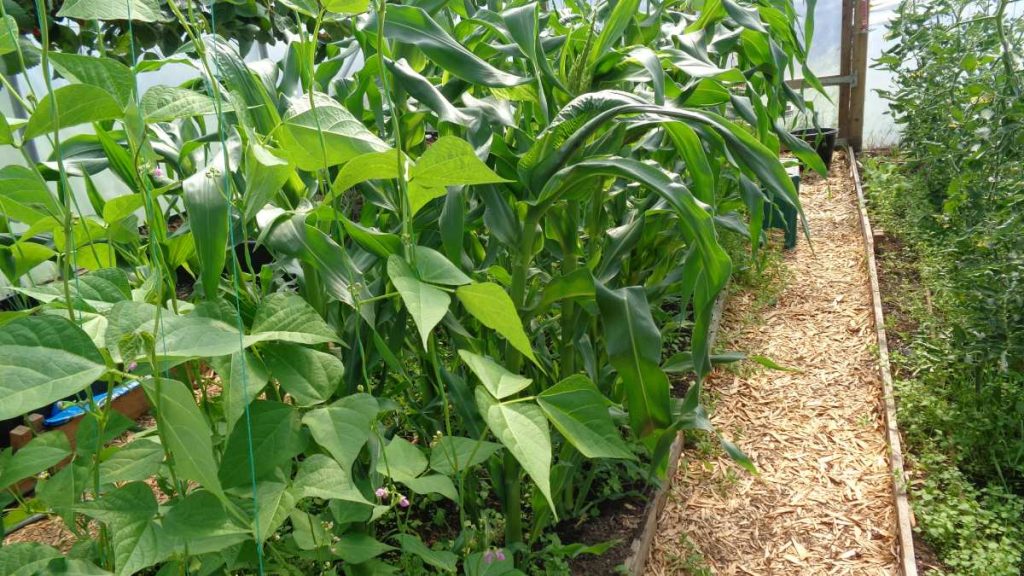 It’s getting like a food jungle in the polytunnel

I planted three Uchiki Kuri squash through membrane in the walled vegetable plot. Despite scattering pellets, the centre plant was killed and the outer plants nibbled. Planted a spare squash replacement in the centre and encircled all three with Feed & Fortify.

So far the double defence has worked well despite the massed armies of slimy fiends night time attacks. 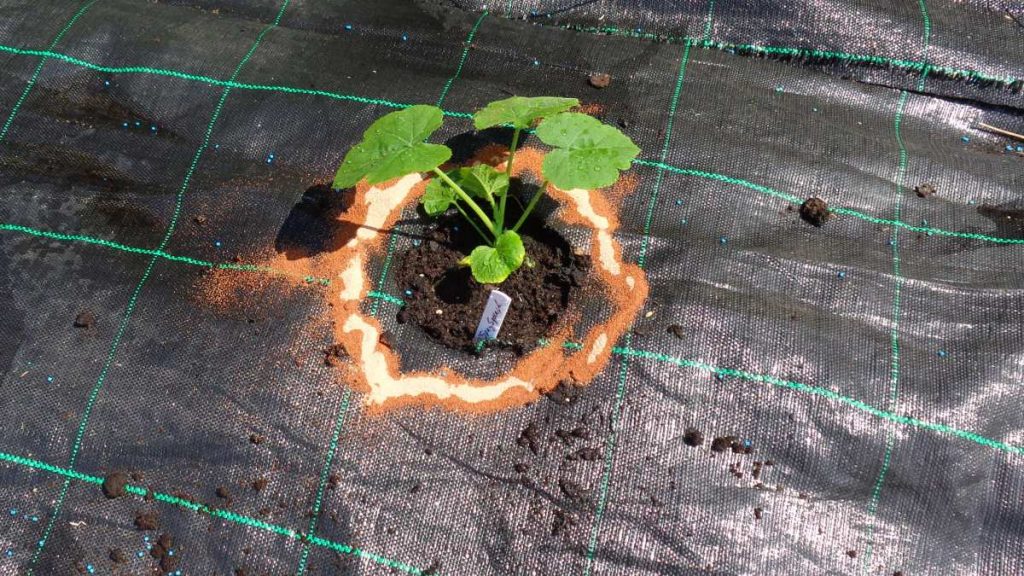 Squash ringed with Feed & Fortify, last line against the snails.

I’m still having to be mindful of my sciatica. It doesn’t take much to start it off but I’m learning to react to the first twinges and move to another task. Some actions are particularly likely to give problems. Hoeing is one and using a vacuum cleaner another. The latter is more of a blessing than a curse!

I’m considering expanding on the method I use for growing the squash – through weed matting. I can’t say I’m overly keen on using weed matting although I know a number of organic commercial growers use it as their core system. Acres of plastic goes against my grain.

Obviously it will only be of real benefit for some crops, I’m thinking anything that is transplanted into the ground for a long time could be worth it. That’s brassicas and sweetcorn for starters.

It should be fairly easy to make the holes in the matting to plant through. Just use a piece of plywood and cut out the holes with a hole saw in the right place. Perfect spacing! The membrane should last at least five years and probably ten if it’s removed and properly stored at the end of season.

I decided to get some mowing done as the sun was shining and I wanted to blow the cobwebs out. I quite enjoy mowing, walking up and down whilst the mower chugs away doing the work.

All was fine until I worked my way up to the top when I was brutally attacked and left bleeding. Horseflies. Lots of Horseflies. They give a nasty nip which really stings but the worst comes later. Itching lumps that drive me mad until I find the anti-histamine cream. Even woke me up twice in the night.