I can’t remember the last time I used my Merry Tiller rotavator. I think it’s approaching two years now. The reason being that it’s quite heavy and my back went. Happily the back is now a lot better, although not 100% yet. 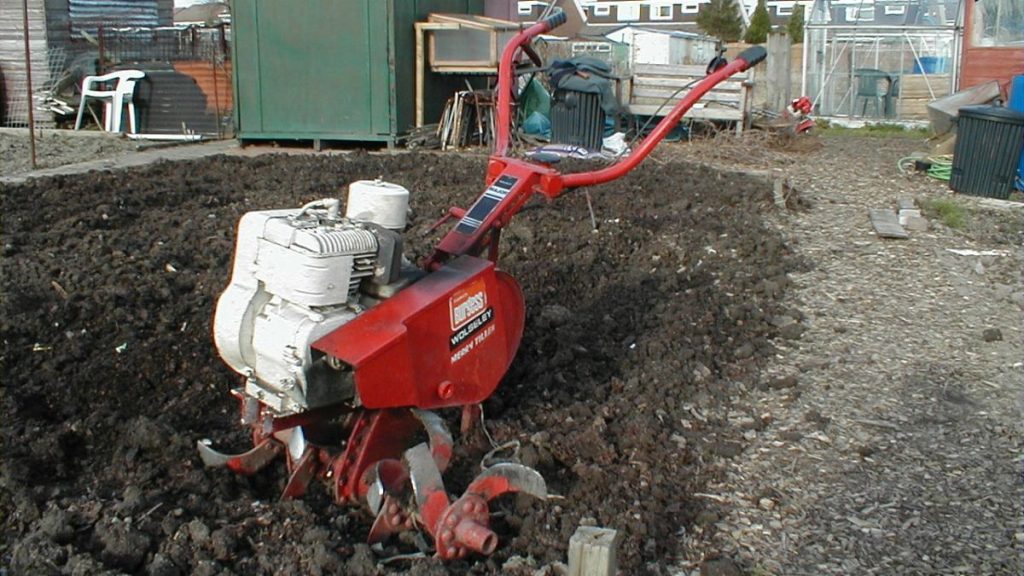 My Merry Tiller back in 2005 – slightly cleaner than today!

I want it going to break up the new potato patch. With the large number of stones in the ground, digging is well nigh impossible but the Merry Tiller copes easily. If I couldn’t till it, there are other methods I could use for the potatoes. Thing is, the traditional method has always worked best for me. See the potato growing information section  on the many different ways to grow them.

It took about an hour and a half to get it going. There was a bit of old fuel in it so I filled the tank with fresh and checked the oil which was fine. Much pulling of the cord only resulted in the odd pop. Even spraying the air intake with ‘engine start’ didn’t help.

Now I’m missing the mechanic gene but after a bit of discussion with the engine in Anglo Saxon, removed the spark plug. The bit that sparks (bet there’s some technical name for it) was black so cleaned that off and replaced the plug. More on spark plugs, seriously!

Few more pulls on the rope and it roared. Then died. Another half a dozen repeats before it appeared to be running consistently. Quite good for a machine that wasn’t put to bed properly and has just sat there in a damp shed for nearly two years.

Next to get it to work, so engage the clutch whereupon the belt came off. It appears to have stretched – consult the Merry Tiller manual. Some fiddling about and I found the adjusting nut seized plus a small grub screw that holds the big wheel was missing and so another problem.

There comes a point when you just have to admit something is outside your skill set and this was getting outside of mine. It’s now sitting in the repair shop and hopefully will be coming home soon. Regardless of it not actually working fully, it’s still amazing how the engine got running relatively easily. They really don’t build them now as they did 45 years ago in Birmingham.

More information on the Merry Tiller Rotavator here and a selection of manuals for a wide range of rotavators can be found on the site here: Free Rotavator Manuals to download.