Tree in the Power Line

Saturday was rather dramatic here. There were high winds hammering us and driving horizontal rain. At points it was hammering on the windows and threatening to overwhelm the gutters. 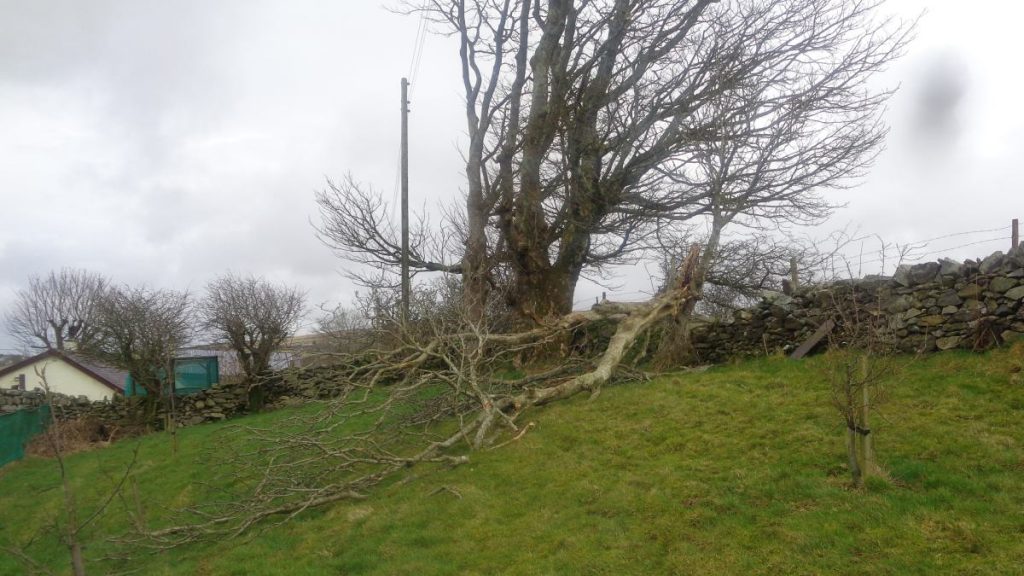 Storm Blown Fallen Tree – it’s bigger than it may look in the photo.

The greenhouses were secured as far as I’m able so there was nothing to be done there. If the wind blew out a pane of glass there was no way I could do anything with glass safely in those winds.

I’d have preferred not to venture outside at all but I had to go up to the hens. They’re shielded from wind, rain and foxes in their secure run but they still need food and water, the eggs need collecting too.

Another Tree Blown Down

As I got to the run, I glanced at the large trees in the back field and realised one of them was leaning over at an angle. Oddly it was at about 45º so I looked more closely and realised it was being supported by the power lines that run across the fields. 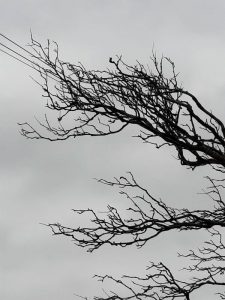 I’m not sure how much power these lines carry, they are three of them carried on wooden poles and they go to a transformer on a pole before going to houses. Not as much as the big pylons but more than in the in the house. Enough to know to keep away from them.

Anyway, telephoned Scottish Power who are in charge of the power distribution here. I think Welsh Water handle the electric supply in Scotland and British Gas in England in this crazy world.

Very soon after a truck arrived with an engineer who I showed to the field. He took a look and realised he needed back up. About an hour later we had 4 trucks outside and a gang of men in high-vis weather gear heading up to the tree. They switched the power off whilst they got the tree off the lines but it only took about half an hour.

It’s very sad losing another tree but it will recycle as potash and heat the house next year.

I’m not in favour of planting woodland on land that is being used to provide food. Two reasons; first we need the food and second properly managed grassland sequesters more carbon than trees.

Shelter belts are a different kettle of fish though. They do use up some pasture but that is compensated by increased growth rates in livestock. I’d be surprised if they didn’t improve the grass growth rates as well although I don’t know of any studies on that. Perhaps most importantly, they increase bio-diversity by providing homes for a range of birds and animals.