As we enter what feels like the millionth year of lockdown, little things that normally would hardly register take on greater significance. Heading out to the compost bin via the back path I realised how things were coming back to life in the border. 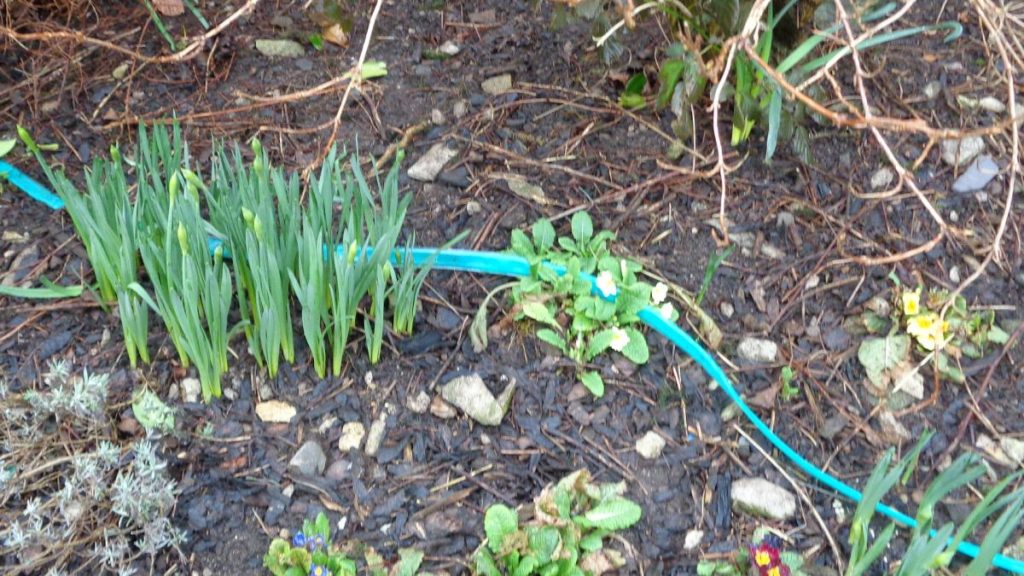 Spring Daffodils in the Back Border

These naturalised daffodils should be well in flower for St. David’s day. They were transplanted to the border back in November 2018 – see this page from my diary for details: Transplanting Daffodils

The last pots of solent garlic went into the raised bed along with the half dozen elephant garlics from the garden centre started from cloves. The corms that were potted are showing no signs of growth yet, hope they do grow but I’m not betting on it.

Marshalls are promising to deliver my very delayed order of elephant garlic this week. They’re good at replying to emails and apologise well but I want the garlic please. At this rate it will be far too late to bother. I wish I’d cleared the garden centre stock and cancelled the Marshalls order now. Hindsight is a wonderful thing.

2 of my raised beds will be getting shallots and possibly elephant garlic if it ever arrives. To get them prepared the remnants of the mulch that stopped weed growth whilst they were empty were worked into the top along with chicken manure pellets and some Growmore.

This should provide a good base level of nutrients for them. I like shallots as they store better than onions and can almost be swapped for them in most dishes when the onions aren’t available.

I’ve avoided posting much about the virus and lockdowns, figuring that people here in Britain are bombarded night after night with little else on the news and really don’t want to read more from me. Having said that, I’d like to share some good news. 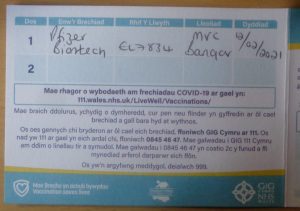 Friday 12th February was a big day for us, we got vaccinated at the emergency hospital set inside a Bangor university sports hall. It was superbly built in days rather than months but thankfully not needed. I was reminded of touring a nuclear war bunker some years ago and thanking my lucky stars that was never used for real.

The whole thing worked like a well oiled machine from arrival to jab and then to departure. Obviously a big thank you to the NHS staff who have worked so hard and put their duty first even paying the highest price.

But also a big thank you to the volunteers who were helping out. From the car park managers coping so cheerfully with tense, elderly people who have hardly driven for a year to those handing out forms inside, guiding people along and probably much else I didn’t see.

Finally, thank you to the British armed forces. They’re awe inspiring and have been from the start of this. Repatriating stranded Brits from places like Peru – remember there were 9,000 odd people rescued from there alone. Distributing protective equipment and managing logistics. Building emergency hospitals and now helping with the vaccination program.

All these people and the unsung heroes like those working to deliver things, keep shops open and keep the lights on, make me really proud to be British and very grateful.

Israel has released a study of 500,000 people vaccinated. They had the Pfizer vaccine but the Oxford one works in the same way and there is no reason to expect different results.

Initially cases of coronavirus doubled after people had the vaccine. The cause is that people had the jab and thought they were immune so stopped being careful despite being warned not to.

After 8 days cases started to fall and fell steadily, levelling out after 21 days at 91% effective. That was from the first shot. They have absolutely proven the vaccine continues to be effective for at least 9 weeks but most experts think that will continue for at least six months. We’ll be getting our second jab after 12 weeks, a large safety margin.

The UK has some 400 million doses of various vaccines on order. Plants have been built and new ones are under construction to produce these. Assuming we vaccinate every adult in the country, roughly 55 million people, with two doses that will need 110 million.

So we’re going to have hundreds of millions doses spare and capacity to keep on making vaccines at a huge rate. The government has announced it intends to donate this surplus to countries too poor to vaccinate their population. That’s the right thing to do.

A way to go

Oh well, a way to go yet but we’re getting there and quite quickly. At current rates we will have every adult in the country vaccinated by June and, if that happens, probably able to return to normal life by July.

I’m so looking forward to going for a meander around the garden centres again and having friends in for a cup of tea. Maybe even fish and chips at the seaside! In the meantime, we’ll keep ourselves and others safe.