Too Cold! Planted Garlic – Not Sowing

It may be freezing cold now but a busy time beckons for the second part of February. 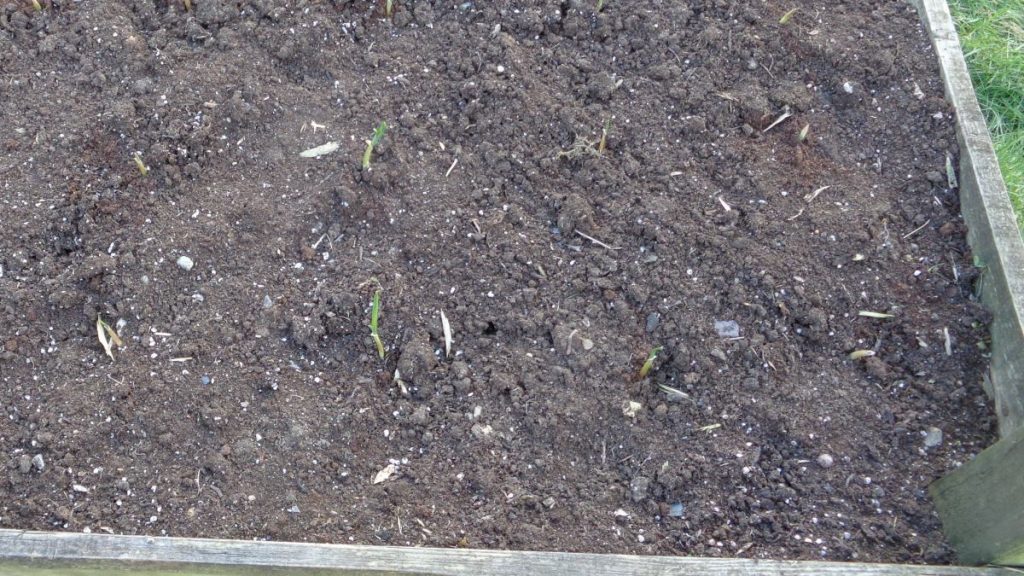 Garlic shivering in the raised bed

It’s too cold out there! The Beast from The East 2 cold snap hasn’t brought us any snow for my grandson to play in but boy, it’s cold. The polytunnel dipped to -5.6ºC one night and the greenhouse -4ºC

The potting shed, where my potatoes are chitting, dropped to just under freezing despite a thermostatically controlled fan heater trying to hold it at 5ºC plus. Bit worried about them but they seem OK <phew!>

The Solent White that were leaping up from their pots are in the ground. I took them out of the greenhouse and placed them in a coldframe without the lights on for a day. This gave them a little protection from windchill but otherwise at outside temperature.

The raised bed they were destined for had had some smashing savoys growing in it until roaming sheep breakfasted on them last year. Cleaned off the bed, gave it a few handfuls of Growmore raked into the surface and that was it.

The next day the garlic was planted at 8 ins spacing each way. It took about half an hour to plant 54 which left me shivering. Not so much the freezing temperature as the wind cutting through me. The sides of the bed being above soil level should give them a little protection from the wind.

I’d have liked it to be warmer before planting out but roots were already pushing out of the bottom of the pots. Sometimes you just have to try and judge which is the better choice and hope you got it right.

I’d hoped to be starting seeds off in the potting shed and greenhouses this week but it’s too cold. I’m well equipped with propagators and heating trays but even they can’t hold temperature under these conditions. See this chart for Best Temperatures for Seed Germination https://www.allotment-garden.org/gardening-information/best-temperatures-for-seed-germination/

Here’s what I will be sowing when the weather warms a bit.

Ideal germination temperature between 15ºC and 25ºC. I sow these shallowly into small pots, covered in vermiculite. Once they’re up, transfer into 3” pots.

Supposed to be the best Italian plum tomato, can do well in a warm, sunny year but not so productive in a cool, cloudy year. As a cordon, it can produce more per square foot than bush types like Roma.

My favourite variety, despite being prone to greenback this heritage variety is a real winner. Great flavour, not too sharp or sweet and good cooked or raw. I couldn’t find a supply of Craigella is a variety developed from Ailsa Craig and identical in growth, yield and taste but unlike its parent, it does not suffer from green back as Ailsa Craig is prone to do.

This is a particularly vigorous cordon variety, being an F1 hybrid and really leaps away. It is one of the first to crop and last to finish. A favourite with the kids. If I only grew one variety this would be it if only to delight the children. Tomatoes have to be better for them than chocolate!

This is been promoted as the ‘new Sungold’ and even sweeter. I’ve not grown it before so an experiment. Fingers crossed it lives up to the hype.

I’ll just be growing California Wonder sweet peppers. I meant to order some Mavras as they did well for me last year but this is another year where you grow what you can get.

I’ll also be growing a couple of chilli pepper plants. I really don’t understand why some people grow loads of chilli peppers – they must have burnt out their tastebuds! Hope to get some ordinary Cayenne peppers but I have some Padron as a backup

This month I’m starting an early leek, Warwick. These will get going in Bustaseed modules prior to planting out in the polytunnel. The Snowdon in the tunnel were superb last year.

I’ve a lot of sets I want to get out when the weather improves and some Ailsa Craig seeds to get going. Sets are easier but seed grown often give less bolting and they’re a lot cheaper.

These mainly get started in Bustaseed modules. One thing I like about these is that you don’t have to sow the same seed in the whole tray. There are 7 rows of 5 modules apiece which can have a different seed in each row. Along with a label so you know what you sowed, of course!

I’m starting off two types of cauliflower, Snowball and All the Year Round which is from the wartime seed collection. Also a red ball cabbage, Red Acre One cabbage I won’t be starting in modules is Hispi. I’ve a lot of old seed so a low germination rate expected. The plan is to sow a whole packet into a half seed tray, then transplant when germinated. Any excess can feed the chickens as micro-greens.

I’ll get some Little Gem going in Bustaseed modules and I’ve a Mesclun mix which will go into the new salad grower in the Eden greenhouse along with radishes (Zlata, French Breakfast) and spring onions (White Lisbon and North Holland Blood Red).

These will be direct sown into the polytunnel in a raised bed. The trick is to sow thinly to save time thinning. Should have some fresh carrots available by the time the first potatoes of the season are ready.

Last but not least as they’re my favourite vegetable, I’m growing Witkiem and Karmazyn. Both can go in direct but I should get the best germination by starting them in pots in the greenhouse.

2 comments on “Too Cold! Planted Garlic – Not Sowing”

Leave a Comment Here on Too Cold! Planted Garlic – Not Sowing Cancel reply