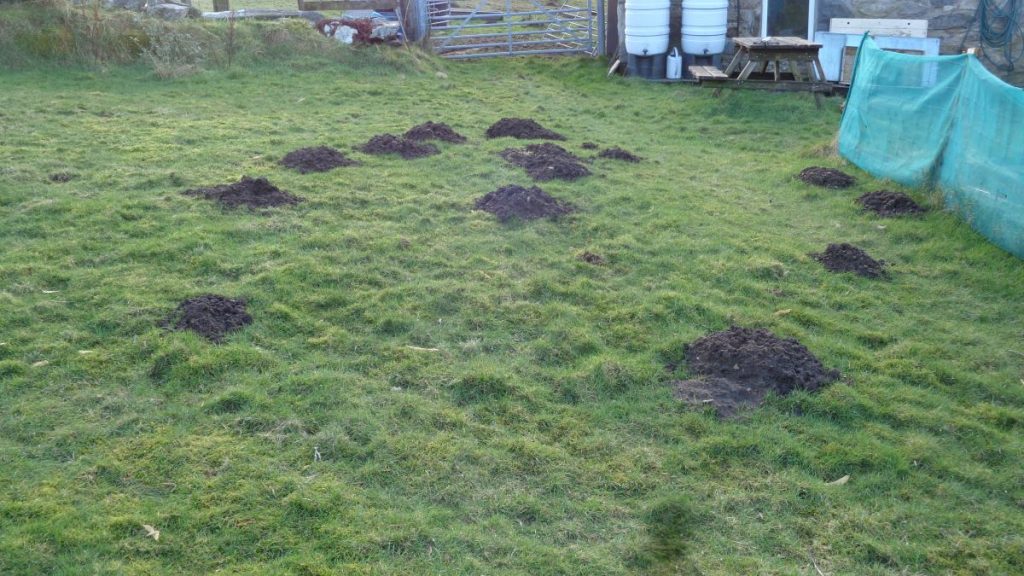 Molehills marking the home of a mole

This year I’ve seen a lot of molehills appear. I like to think it’s a sign of the soil improving here and the number of worms for them to feed on increasing. The management of our pasture changed a few years ago. We now allow the grass to grow quite a bit longer, then cut it or graze it. This allows the grass roots to develop and die off, develop and die off to support the leaves above. Over time, this increases the humus in the soil and therefore improves the ecology of the soil.

Moles throw up their molehills when they move into an area, babies making their way in the world, developing their own territory. Thereafter, they move around in their tunnels munching on the worms and so on. It’s only when they make a new tunnel that they throw up a molehill. Mini-mining spoil heaps!

I know a lot of gardeners consider moles to be, at best, a nuisance but I quite like the velvet gentlemen. One morning I got up to find a mole trying to find somewhere to burrow in our kitchen. The cat had brought him in and then wasn’t quite sure what to do with him! I got him into a tupperware box without being bitten and then outside to a field.

There’s room on the planet for lots of creatures. If they annoy us a bit at times, well that’s no reason to kill them. Even rats have a place in the great scheme of things. Live and let live. Anyway, moles do give us something. Their waste heaps are lovely, sieved soil. The molehills in the photo went onto a raised bed.

One of the best ways I’ve found to grow strawberries is in hanging baskets. You could do this outside but they do so well in the polytunnel in our cool, damp climate. Last year the plants were showing their age so I emptied the baskets and stacked them up for the winter. 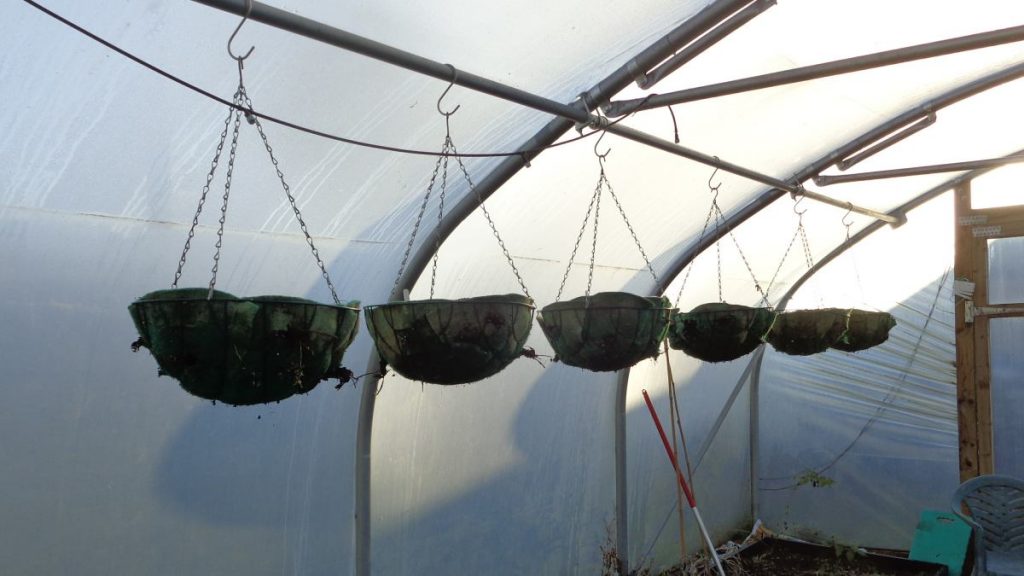 Hanging baskets planted with strawberries in the polytunnel 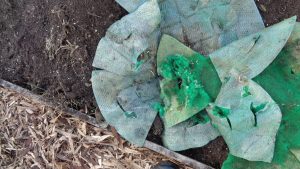 Now it’s time to refill and replant but I hit a snag. The wire frame baskets are fine but a mouse (I guess) had made a nice cosy nest in the liners. Four of the liners are pretty mangled.

Planted up the six baskets I could and in the evening ordered 10 liners and 6 additional baskets. All well and good until I second guessed myself. I ordered 16 inch but maybe they were 14 inch baskets. So, 11 o’clock at night I headed up to the polytunnel with a torch to double check I was right on the size in the first place which I was.

The polytunnel is a bit spooky in the dark, just a bit of light coming in from next door’s outside light and the crescent moon. On the way back I switched off the torch and took a chilly minute to appreciate the stars. So beautiful. Unlike the town, here in the sticks we can really appreciate the sky. Especially when shielded from the distant lights to seaward. Makes up for the rain!