I had a rather nice surprise this year. Behind the brassica tunnel, some potatoes had grown. It’s not unusual to miss a few tubers despite trying hard to get them all at harvest. Well these had grown into really excellent plants and kept healthy so I’d just left them going. 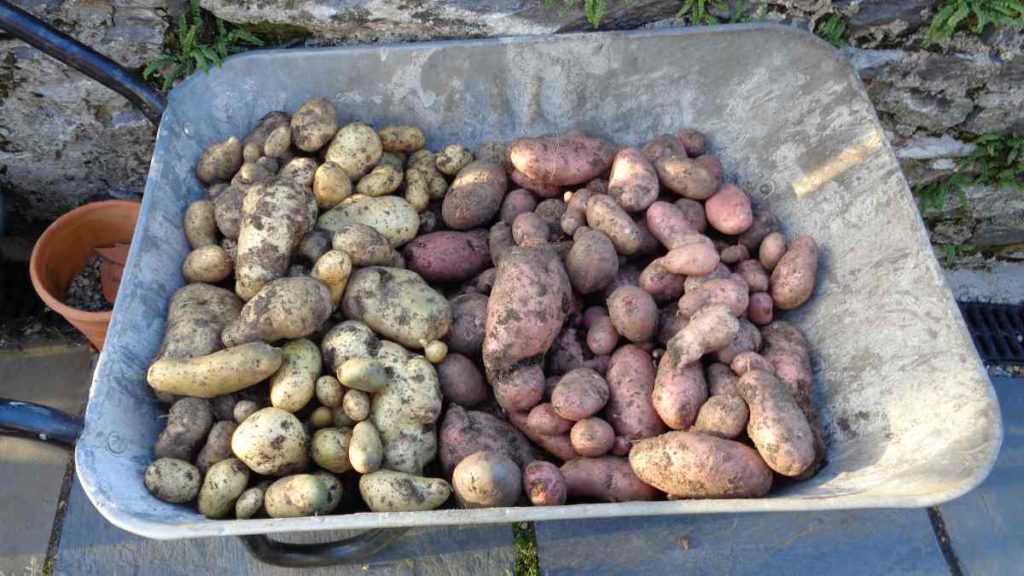 A wheelbarrow load of potatoes that grew themselves.

We’ve had a bit of a cold snap and the frost had hit the haulm so decided it was time to see what, if anything, we had. A whole wheelbarrow load! Mainly Sarpo Mira and Estima. The Estima isn’t a bad potato but after the success of the Orla this year I’ll be mainly growing Orla next season along with Sarpo Mira and Arran Pilot. Maybe Charlotte too, although they didn’t do well this year.

Especially considering I did absolutely nothing; planted no seed potatoes, cultivated, watered or fertilised a great result. They’re not the best I’ve ever grown, but the price was right. 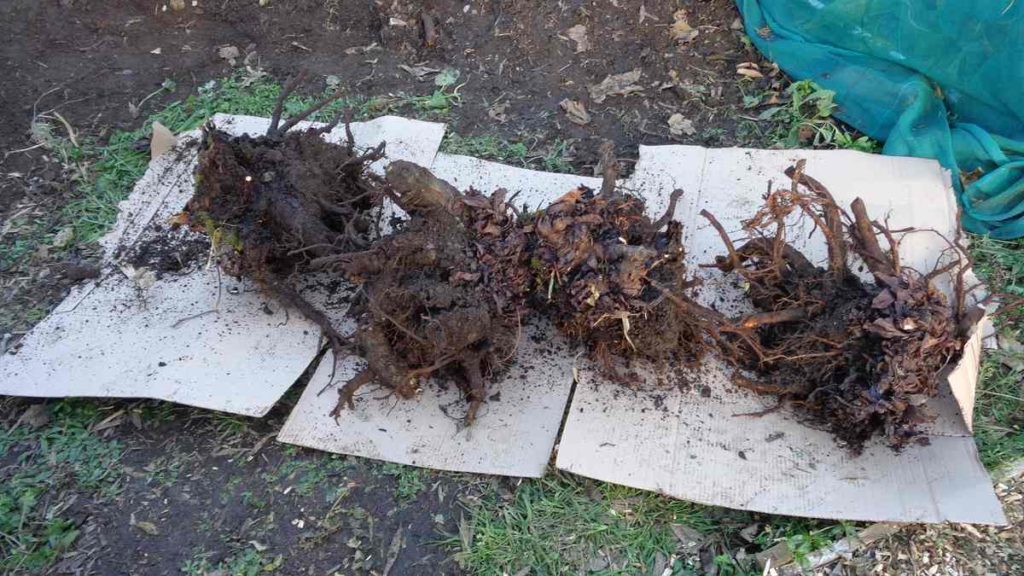 4 Rhubarb Crowns – these will be left on the surface for a few months.

There was a huge rhubarb plant next to the wall. I’ve not a clue how long it’s been there – possibly three decades, maybe four. It threw up flower stalks this year which is often a sign that a plant is reaching the end. Reproducing before dying. Rhubarb are tough as old boots but they’re not immortal.

The first step is to dig up the plant after it has died down in autumn. Then split it from top down into sections, each with a growing tip. Just use a spade – be brutal! This plant split into 4 pieces as it was lifted and these will be further split down. The next step is to just leave it on the ground for the winter.

The plants will benefit from the cold. If it freezes, it won’t harm them. They actually need a period of cold to thrive. There are variations depending on the variety – roughly 60 days of cold – below 3ºC at night – is ideal.

In January or February, prepare the ground for them by digging over and forking open the bottom of the holes. Add copious amounts of manure (horse is best) or home-made compost and plant into it with the crowns just above the surface.

Plant them a metre (yard) apart in a row or block. If you have 3 or 4 plants you can force a plant each year. You basically warm them and exclude light in early spring. Cover with straw or hay or bracken and then place a large black bucket over the crown.

This produces a flush of small, tender, sweet, pale stems. The best rhubarb you can get. It takes a lot out of the plant so after forcing leave them be for the rest of the year and don’t force that plant again for 3 years to allow it to build its strength back up.

When the side border of the veg garden was cleared and dug over this year there was a patch of daffodils. These, like the rhubarb, have been there for donkey’s years and not been cultivated or fed. Still they come up each year and put on a lovely spring display. They’re not large like the bought in types, these are tough wild daffs.
I’d got the bulbs in a bucket in the shed under the bench but I’d forgotten them. So when I rediscovered them, planted out albeit much later than the recommended time of September.

I dug holes about about 15 – 20cm (6 to 8 ins) deep in areas of the back border. Then filled up with multi-purpose compost and planted them closely. These bulbs are much smaller than the ones you buy. Some are more like onion sets but most are a little bigger than shallots. Next soil was returned to fill the holes to the top. The bulb tips are about 5cm (2 ins) below the surface.

Hopefully we’ll get a good display next spring. I do love wild and native flowers. Living in a wild place, they just sort of fit and they thrive on neglect. I’ll take a few snapshots next year.