Looking at a 1942 leaflet issued by the Ministry of Food called How to Make Use of the Hedgerow Harvest. It may be 78 years old but the recipes look really good! 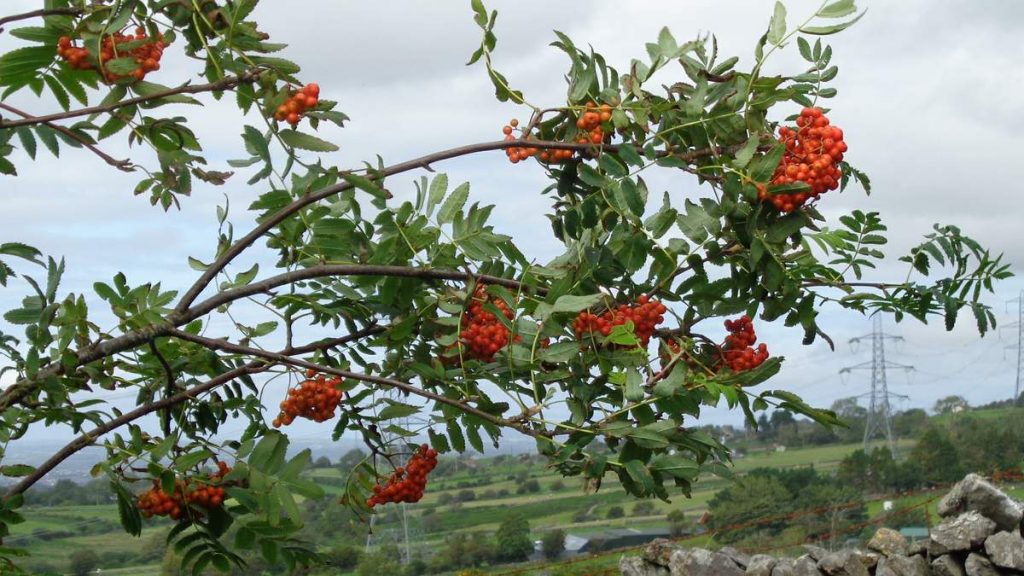 A great crop of berries on the Rowan trees this year.

When I started writing my Dig for Victory book, I spent a lot of time just looking for original source materials. Eventually I gathered what I needed. Some of the guidance leaflets were easy to obtain but others are nearly as rare as hen’s teeth.

Whilst I was searching I kept coming across other interesting things like recipe leaflets issued by the ministry of food. These were issued throughout rationing to help people make the most of what was available. I’ve actually got a couple of similar leaflets from the latter part of World War One which was the first time rationing was ever imposed in Great Britain.

By 1942 things were getting very tough on the Home Front. German u-boats were having a field day sinking our supplies and keeping people well-fed was challenging. We managed but only because we made the most of everything we did have. One leaflet, How to Make Use of the Hedgerow Harvest, covered what you could make from free food growing by the road.

Incidentally, with no private cars because of fuel rationing, the verges were not polluted by traffic to the same degree they would be in the 1960s onwards. This wasn’t just a bit of jolly fun, gathering a few blackberries for a pie. This was survival – a way to add interest and variety to diet becoming more constrained by the week. 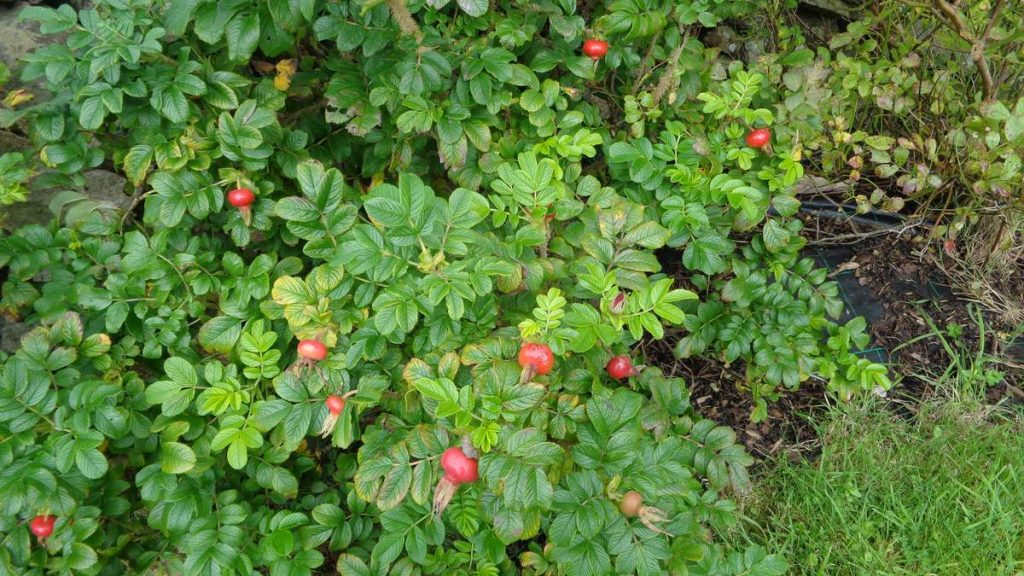 Rosehips. I was given some ‘wild’ roses by a neighbour which were just planted and left to their own devices. They’re doing really well.

One recipe is for Rosehip Syrup. During the war children could make themselves some pocket money by collecting rose hips which the government would use to make rosehip syrup. When I was young children were given rosehip syrup as a vitamin supplement. It was lovely but phased out in favour of concentrated orange. A flavour I only slightly preferred to cod liver oil. Our wild roses have produced some lovely large hips this year. 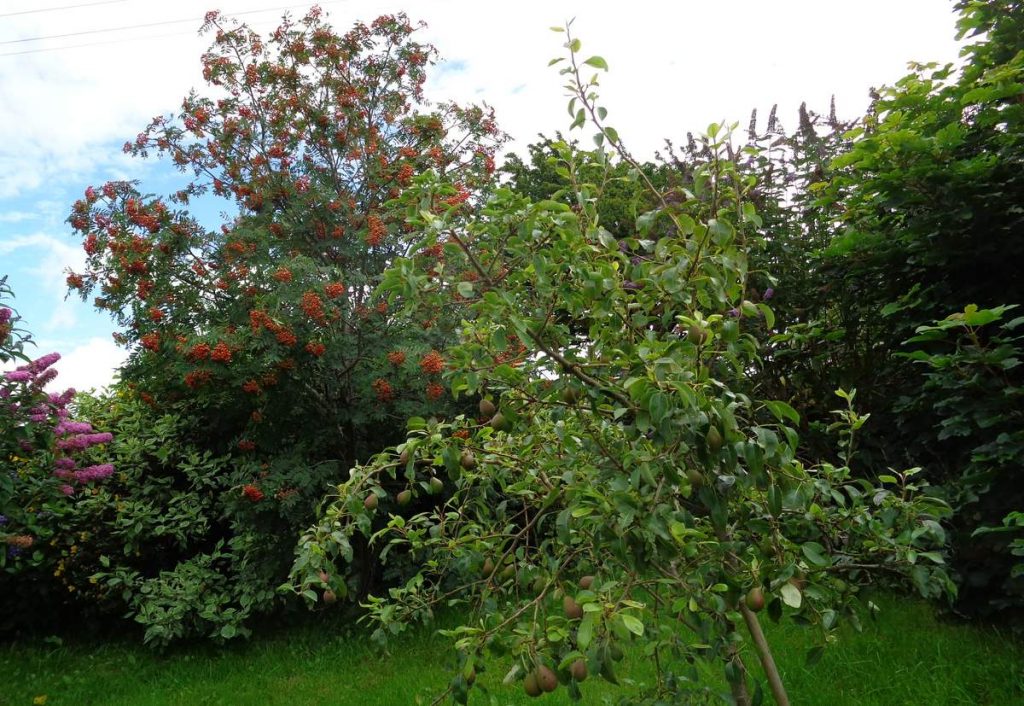 Pear tree in the foreground, another Rowan behind.

Looking around, our Rowan’s are heavily laden. It’s been a funny old year so far. Armies of slugs may have wiped out the climbing beans but some things are doing well. There’s a recipe for Rowan Preserve in the leaflet. Rather good with game, but most likely with wild rabbit in 1942.

Rabbit was a very popular meat in the war. For a start there were many more about as myxomatosis had yet to arrive and wipe out 99% of the rabbit population. They were a major pest to farmers and home growers but being edible and not on ration meant they became a country staple. In the towns the government encouraged people to raise rabbits for the table. Unlike chickens, no specific rabbit food was provided on the ration and they were fed on scraps and grass.

The big surprise is the pear tree. Still loaded and looking good! Who knows we may even get plums and damsons one of these years. We live in hope! 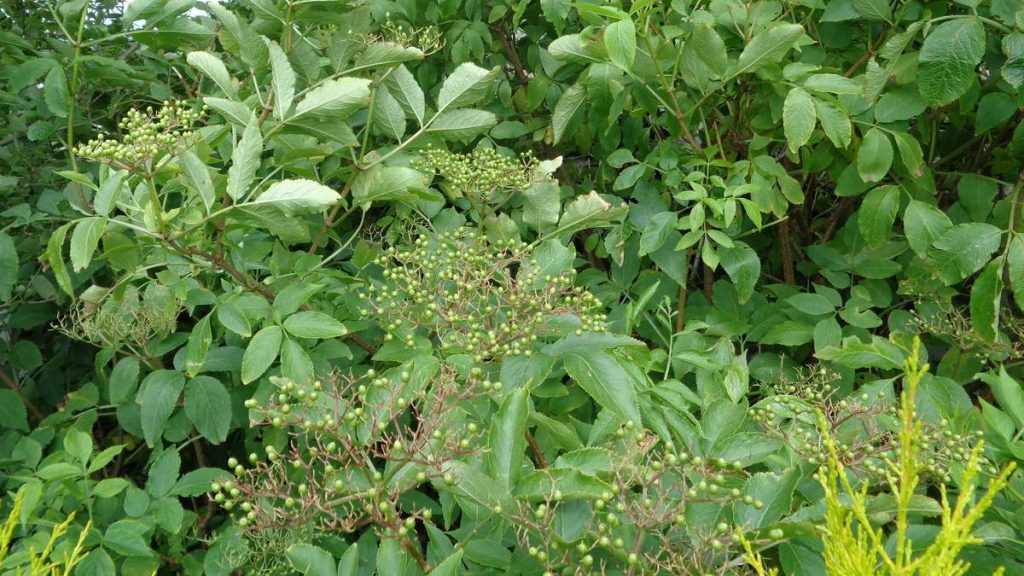 Elderberries developing nicely, thank you! Another thriving on neglect crop.

Looking at the blackberries we’re going to having a glut of those and the elderberries are coming along nicely. I planted about ten elderberries a couple of years ago. Some haven’t done much as yet but one is shooting up and bushing out. I’m expecting a decent amount of elderberries to ripen.

In the leaflet there’s a Potted Elderberries recipe that sounds interesting. Apparently, once made it keeps for years. There’s an Elderberry Vinegar recipe described as a country cure for a sore throat that looks worth a try. Elderberry and apple jam sounds worth a go, too. I’ve never had that before.

Yes, we have no apples

I’m a bit disappointed that my Bardsey apple only has one lonely apple despite a promising start. We’ve not even a crab apple providing sour apples and they’re usually reliable as well as tough as old boots. I must see about planting some other varieties in the autumn.

21 comments on “The Hedgerow Harvest”

Leave a Comment Here on The Hedgerow Harvest Cancel reply