It’s been a very odd year so far. After a nondescript winter, spring came in like high summer. Then high summer arrives but the weather is more like autumn or even winter. Crazy! We’re confused and so are the plants. 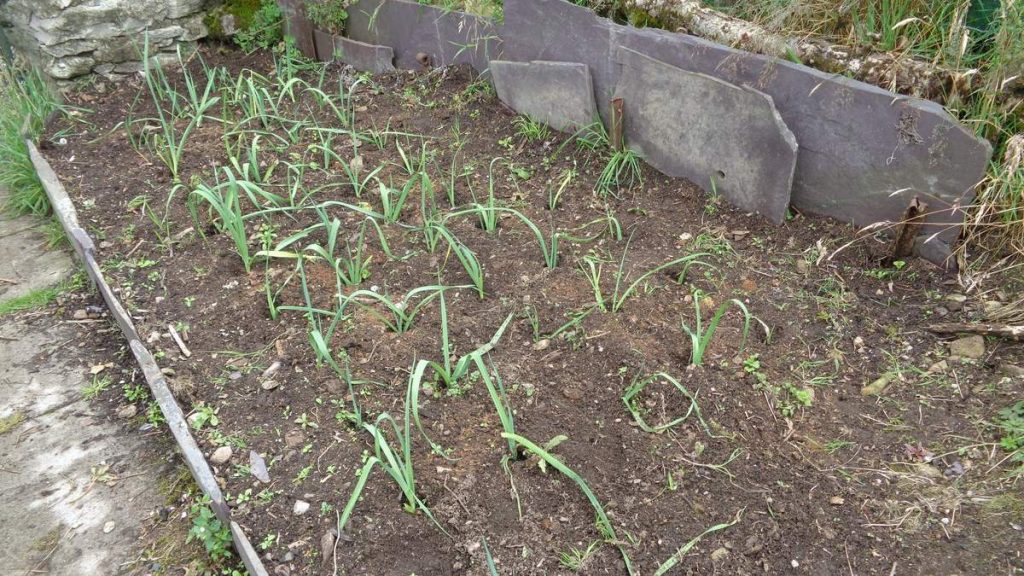 Leeks planted in the side bed where the climbing French beans should be.

Outside the leeks are going in now. The Musselburgh into the walled vegetable garden where the French beans and the rest of the Snowdon Medwyn Williams kindly sent into a raised bed in the field plot. Still planting out brassicas and sorted one raised bed out which is now growing Swedes. More cauliflowers and cabbages to plant out when weather permits.

The mild winter meant a high survival rate for those evil slugs and snails. Now the weather has gone from boiling hot to cool and damp, they’re in their element. Despite applying more than the recommended amounts, they’ve defeated the slug pellets. Plants that are normally little bothered by them have vanished overnight into their mouths.

If next winter is mild, I’ll grit my teeth and buy Nemaslug. Should have done it before but we’ve never had such a massive problem here. The mollusc army has had all of the French climbing beans along with all but three of the runner beans.

The tomatoes in the greenhouses and polytunnel are delivering. We’re getting some ripe fruits but not as many as I expected by now. That’s thanks to the miserable weather we’re enjoying. Fingers crossed I’ll be wondering what to do with them all soon enough.

Cucumbers, however, are producing like mad. My grandson loves the small gherkin ones – var. Partner and we really like the flavour of Marketmore. That’s one of the pleasures of home growing, you won’t find either variety in the supermarket. Just green watery tubes for 39p 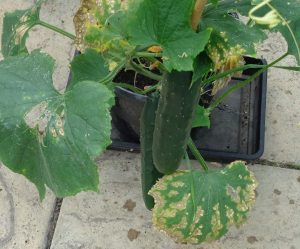 Marketmore cucumbers growing in a pot.

Well, we have masses. We tried salting sliced cucumber to store some years ago but it didn’t really work out well. However, we have a large pot of Greek yogurt so Val came up with an idea and set me to work making a large batch of tzatziki – a Greek cucumber and yogurt dip we like. Two or three dishes will go into the freezer.

They’ll keep but separate a bit giving off extra water when defrosted. The theory is to just tip off that excess water and have an extra thick tzatziki. Hope it works, Val’s rarely wrong! 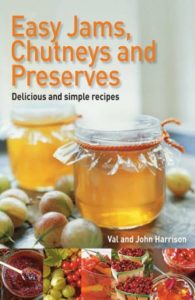 Meanwhile, Val’s been busy with the currants and strawberries so we now have enough jams to see us through a year.. or three! So far we have Blackcurrant Jelly, Redcurrant Jelly, Jostaberry Jelly and Strawberry Jam. Won’t be long before we’re harvesting blackberries either. Blackberry Jelly – Yum Yum!

If you’re new to jam making, you’ll find our book Easy Jams, Chutneys and Preserves tells you all you need to know so you can confidently get jamming. If things go wrong, there’s a chapter on that too!

Once you’ve got a good grasp of the basics, it’s easy to innovate and produce your own recipes.