The practice of removing all but two or three sprouts from a seed potato to produce larger tubers is well documented in older gardening books. The question is, does it work? It’s certainly accepted as fact by many older growers. 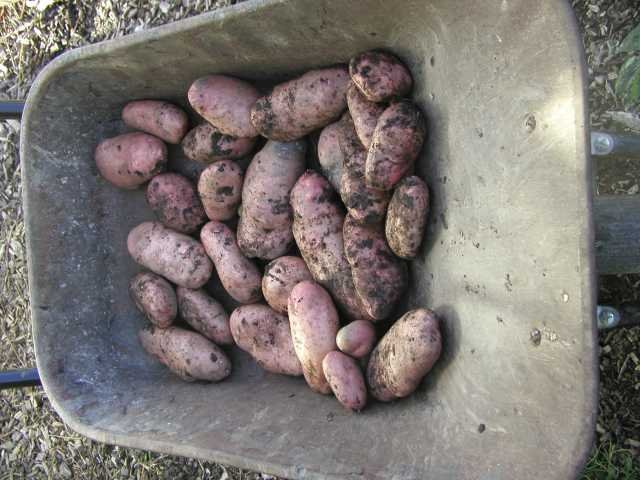 A reader emailed me:

I was talking to someone who works as a farm advisor (crops). We were talking about growing potatoes and he was saying that to get a maximum yield, i.e. number of tubers, it is best to take off the main sprout or even all the sprouts. What happens is the tuber goes into the panic mode and produces more sprouts than it would have normally and hence more spuds.

On the flip side it is also true that if you want to have mainly big potatoes remove all the sprouts but 2 or 3. Do you have any thoughts on this?

The practice of removing all but two or three sprouts from a seed potato to produce larger tubers is well documented in older gardening books. The question is, does it work? It’s certainly accepted as fact by many older growers.

The logic of less sprouts producing less, and therefore larger, tubers makes some sense but the main factors that effect tuber size are available nutrients and water. And the variety, of course. Frankly, I don’t know for sure. I suspect rubbing out most of the sprouts will make little to no difference to tuber size and will reduce overall yield. Certainly commercial potato growers don’t have the time to go through their seed potatoes removing sprouts.

Thinking on it, if reducing sprout numbers worked then it would be better to cut up the seed potato so that each portion only had one sprout. Anyway, an interesting experiment to find out if anyone is so minded.

On this idea of removing all the sprouts to induce panic growth in the tubers. I’ve come across ‘panic growth’ in relation to trees after pollarding or coppicing but not potatoes. My feeling was that this was nonsense, but you never know. So I decided to ask some experts.

First I rang Medwyn Williams and had a chat with his son who works with him. Like his father, he also really knows his stuff. He’d never heard of this ‘panic growth’ and felt the idea made no sense. If you remove all the growing sprouts, there’s nothing left to develop and the seed tuber is just ruined.

I also spoke with Dr David Shaw of Sarpo Potatoes a well respected potato expert. He couldn’t see it working either.

So I reckon this panic growth idea isn’t a starter.