Moving the last of the compost

When we thought we’d finished moving the compost mountain from where it was dropped in the front field up to the walled vegetable garden, there was a bit left on the ground. So as the weather decided to actually stop raining, time to get the last bit. 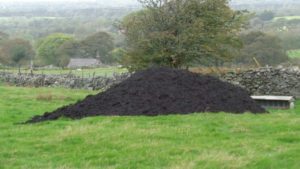 The Compost Mountain when it arrived

I thought there was maybe a couple of wheelbarrow loads – which is well worth a little effort. If I was buying it in bags, there’d be about £10.00 worth in a barrow load. In fact there was more than a couple of barrows, about a dozen in total! It may have been 11 or possibly 13 but I lost the exact count. It’s me age, me dear.

I’ve raked as much up as possible, without raking up the grass under. What’s left will just help the grass grow. Most of us think of grass as lawns or maybe football pitches but arguably it’s the most important crop on the planet. Grass doesn’t just feed ruminants like sheep and cattle, it’s actually a vital part of fixing carbon in the soil. Anyway, that’s an article to be written sometime. Back to work!

We had a bit of a storm on Friday night through the early hours of Saturday. It turned out the wind had blown an old stepladder into the greenhouse smashing a pane. With the aid of my son-in-law that was replaced – a bit tricky as the pane supported the one above it but we got there. Then made a start clearing up the glass.

That wasn’t the only storm, by the way. We had another on Monday night – or Tuesday morning. At 1:30 am I was sitting reading a book on the PC when the power goes off. Groping around for a torch when a massive boom of thunder. Got the unhappy computer running again and then to bed only to be awakened at 4.00 am – roar and rattle of hail in volume hitting the roof had me up for a while.

Toughened glass is tough but not unbreakable. The safety lies in the way it breaks into little pieces rather than lethal shards. An important consideration if you’ve children or grand children around. The drawback is that it is a real pain to clear up the little bits when you have a break.

So on Tuesday I swept up what was left of the glass bits and then got out my workshop vacuum. It’s the best way to get the glass bits out of the door tracks etc.. It only took 15 minutes with the vacuum but of course, the heaven’s decided to open for a quick shower. Not the best thing, working a mains powered piece of equipment in the rain. Oh well, I survived to write about it. 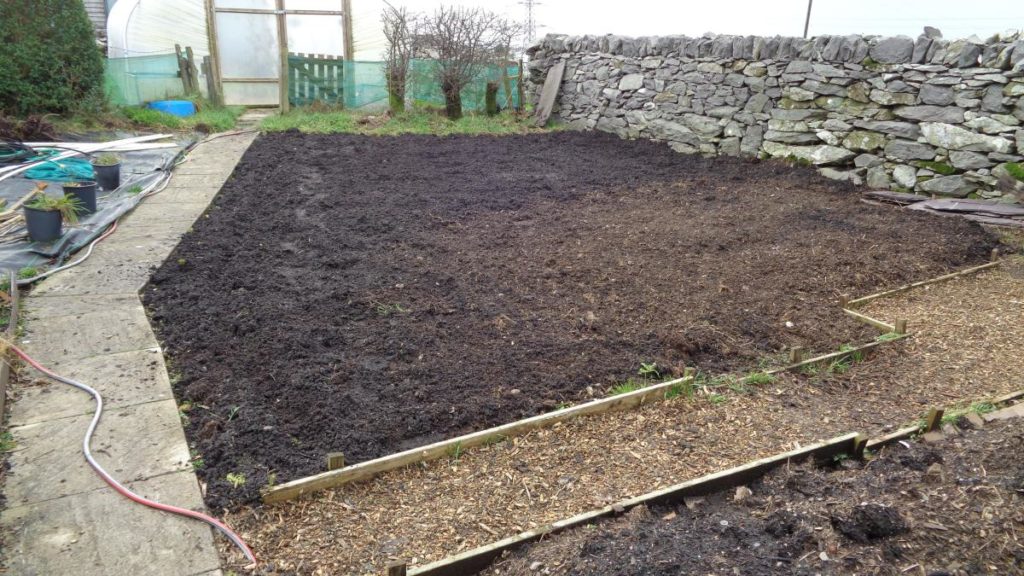 Top of Vegetable Plot – all level now. The lighter coloured compost on the right is from my bins, the rest was bought in.

The next job was to spread all the compost evenly. The soil level is now about 20 cm (8”) higher than it was although I expect it will sink some as it settles. I’ve not spread it over the soil in the brassica tunnel as that has crops growing in it. When they’re harvested I’ll move the tunnel and cover that area from the heap made behind it. 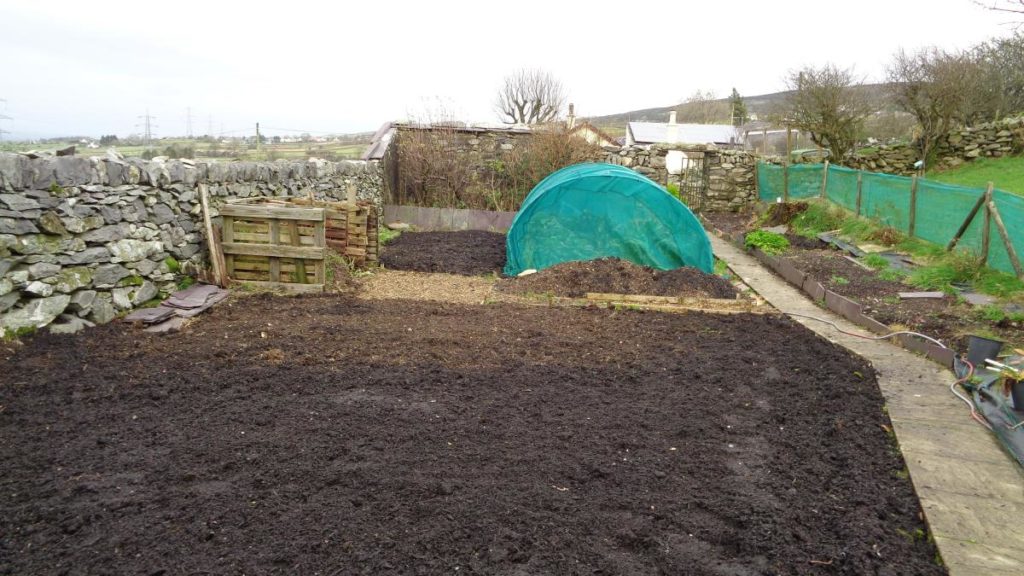 Looking down the plot. The pile behind the brassica tunnel will cover that area when the tunnel moves in the spring.

I have been promised a load of manure but that’s yet to appear, if it ever will. But, Mr Blackadder, I have a cunning plan. There’s no benefit to digging over the veg plot now and if I just leave it the weeds will be happily swamping in the spring. I could cover and mulch but I don’t have the materials and anyway, there’s a better option. Green manure.

I’m sowing field beans which are hardy and basically the only green manure I can sow at this point. Come spring I can dig them in and add to the humus in the soil as well as retaining nitrogen and suppressing weeds.