I’ve just had an email with the subject line of “John, study shows using fertilizer increases plant disease…” which led me to an article entitled “Fertilizer Destroys Plant Microbiome’s Ability To Protect Against Disease” 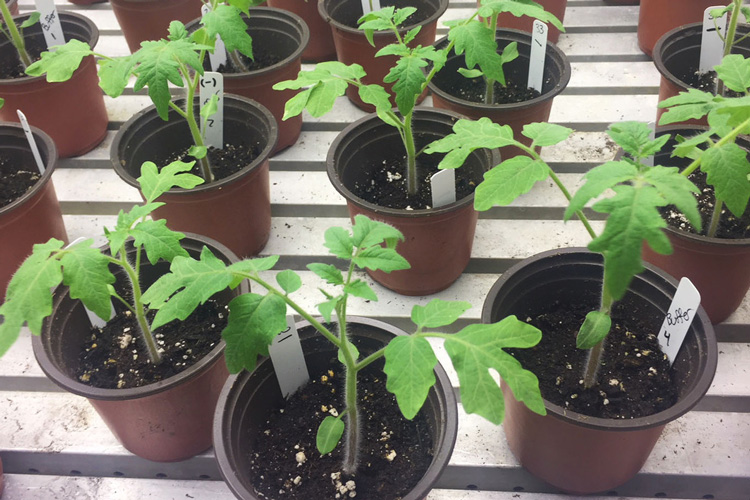 A growth chamber packed with tomato plants sprayed with bacteria to simulate different leaf microbiomes and then challenged with a plant pathogen to measure how well the microbiomes protect the plant from disease. (Britt Koskella photo)

Now, this obviously grabs a gardener’s attention. In these days of information overload where we often don’t have the time to read beyond the headline as the stream of shares rolls down our social media some are going to assume that is the whole story and using fertilisers will make our plants ill. So the conclusion would be – stop using fertilisers.

The original article – Fertilizer destroys plant microbiome’s ability to protect against disease – is on Berkeley News from the University of California, Berkeley. UC Berkeley is a highly respected university of world renown – so a respected source that I would tend to trust.

The original research was undertaken by UC Berkeley biologists. The senior author being Britt Koskella , an assistant professor at Berkeley. She’s a respected scientist who has a number of published papers and describes herself

“I am an evolutionary biologist seeking to understand how interactions among species generate and maintain much of the diversity we see on earth. My work is focused primarily on host – pathogen coevolution, but with a building interest in the role that the microbiome might play in affecting this interaction. Using a number of bacteriophage – bacteria – plant systems, I have been working to address questions relating to the spatial and temporal scales of pathogen adaptation to their hosts, the impact of coevolutionary dynamics on community diversity, and the influence phages might play in altering the phenotype of their bacterial hosts in meaningful ways, for example by selecting for decreased virulence to eukaryotes.”

So far it’s looking pretty bad for the fertiliser industry, but read on please.

The actual study was carried out on tomatoes. Just tomatoes but I suppose you could reasonably extrapolate that to other species. Or can you? Perhaps tomatoes are unique in some way or it’s only true for Solanaceae (the nightshade family to which tomatoes belong).

The Study on Tomato Plants

They took tomato plants and sprayed them with bacteria cultured from healthy tomato plants. Some of the plants had fertiliser and some not. The biologists found that spraying tomatoes with microbes from healthy tomatoes protected them from disease-causing bacteria, but that fertilizing the tomatoes beforehand negated the protection, leading to an increase in the population of pathogenic microbes on the plants’ leaves.

But the researchers don’t yet know whether the increased number of bad bacteria on the leaves actually makes the tomatoes sick, the study clearly shows that fertilizer throws the community of microbes on the leaves off-balance.

Britt Koskella goes on to say

“When we change the nutrient environment that plants are in, we are fundamentally altering the plant-microbiome interaction and also, importantly, the microbiome-mediated protection of natural plant/microbe interactions.”

The article then goes on to say “That potentially could allow disease-causing organisms to enter the plant.” Yet the article later states.

“Koskella has suspicions about why fertilizer alters the microbiome, top among them the possibility that the nutrients make healthier leaves, which keeps all the microbes happy and obviates the need for the good microbes to out-compete the bad microbes. She and her group are now pursuing experiments to test that hypothesis.”

The article title is a prime example of cherry picking facts to either back up a position or click-baiting just to increase visitor numbers. Fake news. The article itself is very interesting. Some results were surprising like using lower doses of protective bacteria was more effective than higher against one disease.

The study certainly highlights some interesting areas to study further. Biological control of disease would be the main one to my mind.

My main point is, I suppose, applicable to life in general as well as gardening and growing. Don’t just skim read, the Devil is in the detail. Consider if the information provider has another agenda or bias. Beware of click-bait!

I’m not immune to bias either but I do try and present ideas and arguments fairly. I’ve been accused of being “an organic beardy-wierdy” and “a tool of the chemical companies”. So just maybe I’m managing to achieve even-handedness.

How to Grow Tomatoes